Nurses and medical assistants from the Student Health Center administered free flu shots to students on Wednesday in the Caf as part of the SHC’s aim to reduce the incidence of flu on campus.

The event followed Stick or Treat, a Halloween-themed event in October that gave students the opportunity to get free flu shots, receive goody bags, eat a free dinner and learn more about flu symptoms. Stick or Treat is a “long-standing tradition,” according to Arleen Fernandez, a registered nurse at the SHC.

The SHC began administering free flu shots about five years ago when the H1N1 virus began to spread, according to Fernandez. Before that, the center offered the immunizations at reduced cost to students.

“We’ve always been an advocate for making it no cost and we sent several proposals to Student Affairs and then on to the college to get it for free, so they have supported us for the last several years,” Fernandez said.

Wednesday’s event was held to provide students with an additional opportunity to be vaccinated before going home for the holidays, according to Fernandez. It was scheduled to allow students roughly two weeks to build immunity before traveling, as the effects of the immunization are not immediate.

“With Thanksgiving holiday coming up, students travel, and there are areas already that are starting to have outbreaks of flu,” she said. “If someone travels to that area, and they haven’t had their flu shot and they come back … we see some spreading.”

Freshman Nathanael Robinson does not usually get flu shots on a yearly basis, but decided to get one this year because it was free. He said he was already planning to get a flu shot and found the Caf location convenient.

“I think it’s a really good idea because it’s right near the opening of the Caf,” he said. “I was like, ‘why not just go to the Caf.’”

Junior Heather Dale has never gotten a flu shot and does not plan to get one this year, but she said she thinks it is nice of the SHC to make flu shots more accessible to students, especially since the Health Center location is not very close to some student housing. 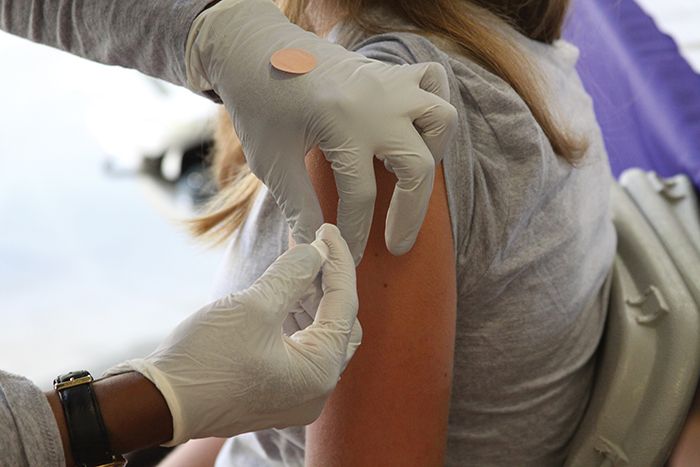 “I think that’s a really good idea,” she said. “I probably won’t participate, but I appreciate that they do that.”

Fernandez said that the West Coast typically sees more cases of influenza between December and February, but the SHC saw cases through April last year.

The Centers for Disease Control and Prevention lists fever, cough, sore throat, body aches, headaches, fatigue, runny or stuffy nose and possible vomiting as symptoms of influenza. According to the CDC, the flu can spread one day before these symptoms manifest and from five to seven days after symptoms develop, a statistic that Fernandez said most students may not be aware of.

“You may not even know that you have it yet, and you actually shed more virus at the very beginning than you do when you’re more ill,” she said.

The CDC estimates that influenza vaccinations have prevented 13.6 million flu cases between 2005 and 2011.

The SHC will be holding another event in December during National Influenza Vaccination Week. If students miss the event or are not comfortable being vaccinated in the Caf or Sandbar, students may also receive vaccinations at the SHC.

Fernandez said that the main goal of giving free flu shots is to prevent students from getting ill and missing classes.

“I think one of our overall goals as health services is to keep students in classes and to support them academically as well. A healthy student certainly does better, and when they have the flu they can miss 5 to 10 days of time and that’s big,” she said.