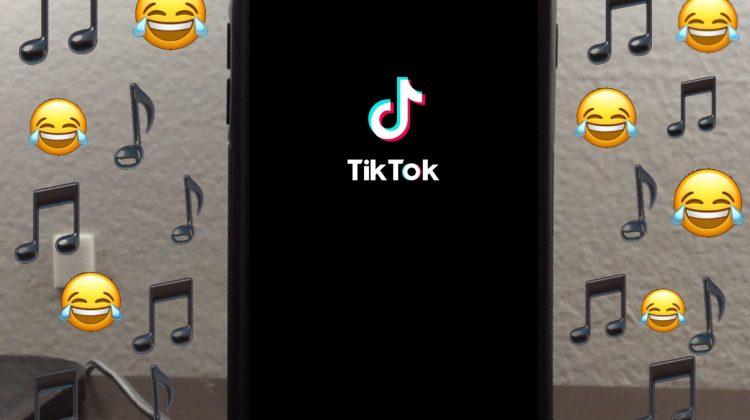 An iPhone stands on the table with the TikTok app pulled up on the screen. Surrounding the phone are laughing and music emojis that represent the TikTok platform’s culture. Art by Timothy Gay

TikTok surpassed Google as the most popular website of this past year, according to Cloudfare. Student TikTokers with large followings said the platform’s dominance in entertainment is due to viewers having shorter attention spans.

TikTok’s platform is designed to have an unlimited stream of new content for users to watch, according to The Indiependent. Technical University of Denmark‘s study found that constantly streaming new videos can collectively reduce audience’s attention span over time.

“Sitting through a Netflix show for a lot of people can be too much,” said Shawn Bhatia, graduate student food content creator with 94,000 followers. “With TikTok, you’re getting something that catches your eye immediately as opposed to these long-form content.”

Junior Madison Fabbian has almost 64,000 followers on the platform and creates a variety of content including sports, humor and family-based. She said TikTok content is tailored to audience preferences.

“People’s attention spans are becoming shorter because of how TikToks are short clips and there’s endless videos,” Fabbian said. “If one’s boring, you can just go to the next one.”

First-year Victoria Hertel has garnered over 300,000 followers on the platform making fun fact and dance videos. She, however, sees the negative effects that TikTok’s impact can have on users.

“People often scroll on it for too long and some of the content is kind of meaningless,” Hertel said. “A lot of times, you won’t remember the videos you watched that day.”

Hertel said she believes TikTok is more beneficial for the creators on the platform than it is for the consumers.

“[TikTok] is easy for creators to create and it’s very possible to have your video be seen by a lot of people,” Hertel said. “For viewers, I think it’s more worthwhile to watch TV or a different form of entertainment that took more time to create.”

“TikTok is just so quick, like it’s one video and then the next,” Hertel said. “On YouTube, it’s more captivating, like you’re watching real life play out.”

Fabbian, however, is the opposite and said she prefers the short-form content that TikTok offers.

“I still do like TV, but I have found it harder to pay attention to longer episodes because [TikTok] has affected my attention span,” Fabbian said. “I like the instant gratification of like, ‘Oh this video is funny, let’s keep going,’ and it’s also addicting. I used to watch a lot of YouTube, but I haven’t recently just because I’d rather watch shorter videos.”

Bhatia also said he enjoys being on TikTok. He thinks it’s the best social media app because it democratizes entertainment more.

“Now, it’s really the audience that is picking what they’re liking and what they’re not liking,” Bhatia said. “In the past, people were kind of foreseeing things to happen in the entertainment industry rather than people liking it or not.”

Bhatia believes that eventually, more creators and entertainers are gonna take advantage of what TikTok has to offer for viewers.

Viewers are more hooked on TikTok videos than YouTube videos, according to App Annie. Although YouTube has 1.3 billion more monthly users than TikTok, TikTok surpassed YouTube in terms of watch time by 10 hours in the U.S. and U.K.

Bhatia also spoke on how TikTok is impacting the music industry more than streaming services like Spotify and Apple Music.

“You see music blowing up on TikTok like crazy,” Bhatia said. “If you create a song on TikTok and it goes viral, if you’re a small artist, you could blow up at any time relative to any other past time in 100 years of music.”

The student influencers broke down how TikTok is a better entertainment option than Instagram, despite having a billion fewer users.

“I remember Instagram in the 2010s era, and being an influencer was all about aesthetics,” Bhatia said. “Instagram was more about looking the best online and flexing. The shift with TikTok is that you’re seeing people follow their passions.”

Fabbian said entertaining herself on TikTok inspires her to come up with new ideas to share.

“I like [TikTok] better than any social media because I like seeing posts from people that I don’t follow,” Fabbian said. “On Instagram, it’s just me seeing my friends, so I expect to see the content because it’s the same posts over and over again. On TikTok it’s things that I haven’t seen before, so it’s kinda unique and shows me different inspirations.”

Bhatia mentioned how TikTok influenced other platforms, like Instagram with Reels or YouTube with Shorts, to create their own versions of the short scrolling videos format.

“There’s a reason why YouTube, Pinterest, Twitter, literally every single platform now has a short-formed video thing, because people’s attention spans are getting shorter,” Bhatia said.

Just like how the 2010s was for Facebook and Twitter, Bhatia believes that the 2020s could be the decade of TikTok. He said there could be more social media apps that develop in years to come, but right now, TikTok is where all the attention is.