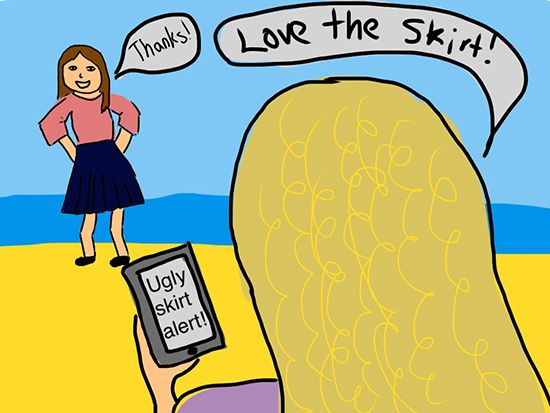 All of the tour guides at Pepperdine bring up the fact that this school is a close-knit community of caring individuals. Pepperdine does seem like such a place, at least at first glance. With every few steps, people greet each other enthusiastically. The transaction always involves smiles and courteous small talk.

Probably several times during the day, a student will hold the door open so that several others can pass through, and the person who accepts this gesture will usually have the decency to say “thank you.” Actions such as these display a certain warmness within the community, one that Pepperdine has advertised to prospective students. However, this may not be the true face of the students of Pepperdine, at least not all of them. There is always that sneaking suspicion that not everyone with a friendly smile is being sincere. At least a fraction of these people should be ugly inside. At least, that’s the way people who look at Pepperdine’s Confessions Facebook page might think.

Anonymous school confessions pages as a whole have been growing steadily in popularity for a while, if the Huffington Post’s article from March 2013 about the University of Colorado is any indication. Being granted such freedom to post whatever one has on his or her mind, whether it be healthy or not, is bound to have consequences. The inner cynic in many would say that, when unregulated, humanity shows the worst of itself. Sadly, not even a religious, tightly knit community like Pepperdine is exempt from this rule.

There’s a disconnect between the friendly atmosphere most prospective students experience their first time on campus and the disrespect of people on the Confessions page. It would be bad enough if people had the impression that the campus had intolerant and malicious individuals, but the attempts to make it seem welcoming feed the even worse conclusion that everyone only pretends to be nice.

Recently, the Confessions page posted a comment from a prospective student asking about the women at Pepperdine. Post No. 541 reads: “I’m a prospective student, and I was wondering how the girls are here. Are there a lot of wifey, material girls aka don’t drink, don’t sloot around or are they mostly shallow materialistic sloots as depicted by this page? Thanks.”

While the university’s female population may be infuriated over this question, deeming it judgmental and ignorant, it is not unfitting in the context of the Confessions page. Much of the material posted discusses sexual attraction or desired sexual actions. In many cases, it is the comments from both male and female students that are the most vulgar, giving the prospective students who visit the page an entirely different view than the one they received on Admitted Students Day.

It is unknown how this dichotomous image problem will affect how many prospective students pick our campus, though other schools with such sites seem to be doing fine. However, it is clear that the image projected by our posts on the Confessions page is not a positive one. What makes this particular image infuriating is that it doesn’t convey the character of every person on campus, yet many outside viewers might assume that it is the case.

Between the rants about campus housing, on-campus smokers and hook-ups, the typical spirit of Pepperdine sneaks through onto the page. In post No. 570, a recipient of one of the random love letters circulating campus recently thanked the writer and admitted their struggle with bulimia, saying “I went to the bathroom to throw up and I found the letter and talked myself out of it. You are an amazing person. Thank you.”

In true Pepperdine fashion, the comments posted underneath are genuine and full of love. That is, until the last one. It contains a link to an article about the five reasons why men should date women with eating disorders. Some of the reasons include improved overall looks, vulnerability, low cost and quality of hook-ups. With a comment like this, the only explanation is that the commenter was hoping to get a reaction, but unfortunately for them, no one else found it amusing.

Even though many Confessions comments could be explained away as humorous quips, there is still a precarious line that should not be crossed when discussing certain issues, especially on social media. If the goal of the Confessions page is to be a seemingly light hearted outlet to leave students gossiping about anonymous identities, it fulfills its purpose. But it also serves another cruel, insensitive one; it hands students a channel to succumb to revenge and animosity.

Pepperdine’s Confessions page is not unique, and it is certainly not the only online site where people can express their feelings or frustrations. When determining what the page means to our university, we need remember that it remains an online representation of the students who attend Pepperdine. Some of the posts are entertaining, no doubt, but the social media bashing trend does more harm than good. If you feel the need to vent about Pepperdine, find a friend who won’t air your dirty laundry to anyone else who’s interested. Conversations are much more enthralling than the clicks of a keyboard anyway.