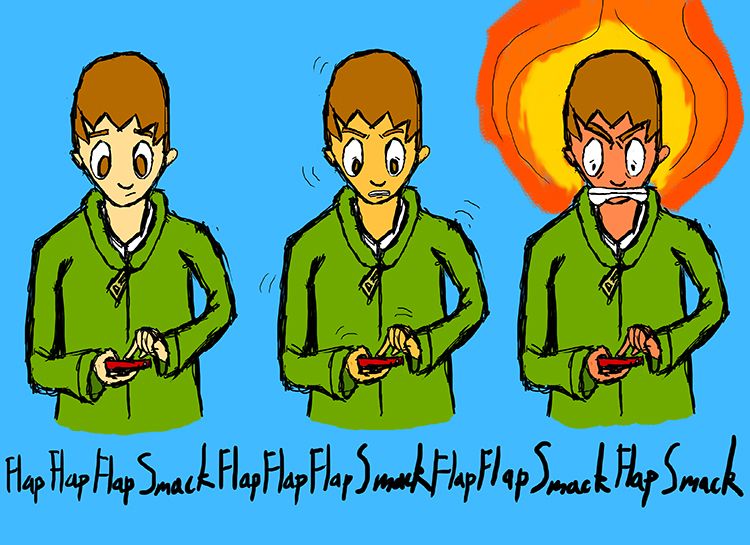 It’s late at night and the eight students heading back to their dorms board the shuttle and pull out their phones, as usual. But something is different. This time there is no Instagram, Twitter or Facebook. This time, there is something enticingly evil in the air. “Tap. Tap. Tap. PING!” resonates all around the vehicle. One student curses out loud. Another hits his thigh in an act of absolute anger and helplessness. Another just nods her head. Out of the eight students in the shuttle, four of them are consumed. And the virus is spreading.

Twitter is filled with thousands of rage tweets one can find when performing a quick search for the most downloaded free app in the past week. For people who don’t know, Flappy Bird is an indie mobile game consisting of guiding an eight-bit colored bird through a narrow gap between pipes. The concept is simple: Every time you get the bird through the gap without hitting a pipe you get one point. The implications, however, are not.

It seems as if in this age of total electronic and digital consumption we can’t get enough, yet somehow this miniature pixelated bird has managed to fill a gap we didn’t know existed. The simple task of guiding a small bird through a gap has us scratching our heads in disbelief — how is something so simple so complicated?

The game — which used to be available on both Google Play and the App Store — boasted more than 50 million downloads, bringing in around $50,000 daily.

By the wisdom of the crowd: “Devil Bird,” “The most annoying game you will ever play in your life,” “My life is a total ruin because of Flappy Bird,” “This is life ruiningly addictive,” “This game is mental junk food,” “IT CONSUMES YOU!!!” and many, many more.

But like the late great Heisenberg, all addiction related empires must fall. Its creator, Dong Nguyen, has now removed the game from both Google Play and the App Store. In an interview with Forbes, Nguyen said: “Flappy Bird was designed to play in a few minutes when you are relaxed. But it happened to become an addictive product. I think it has become a problem. To solve that problem, it’s best to take down Flappy Bird. It’s gone forever.”

Flappy Bird’s wide-ranging reach will continue as people are now selling their mobile device with the app already installed for as little as $300 and as much as a scandalous $99,000 — a bid that has now been taken down by EBay authorities because of its violation of Apple terms.

Why is Flappy Bird so popular? Not because it serves as a stress reliever but because it consumes us. It is a highly addicting, endless game, yet we don’t care. All we want is out. Out from our schoolwork, out from our complicated love lives, out from all the mundane problems that make us go crazy. And the solution is just more “crazy.”

There are also less philosophical explanations for the Flappy Bird addiction. The controls are so basic it requires little to no instruction, making the game easy for anyone to understand. The game itself is anything but easy though, and this makes each and every point scored all the more valuable. We put hours and hours of effort into Flappy Bird for just a few points because the game is just that difficult. We are infatuated with the prize that is so close, yet so far.

There is now a chance the Flappy Bird nightmare will come to an end. Delete the game, end it once and for all. You won’t be tempted to re-download it because it is not there anymore. There are much more worthwhile things with which you can waste your time.