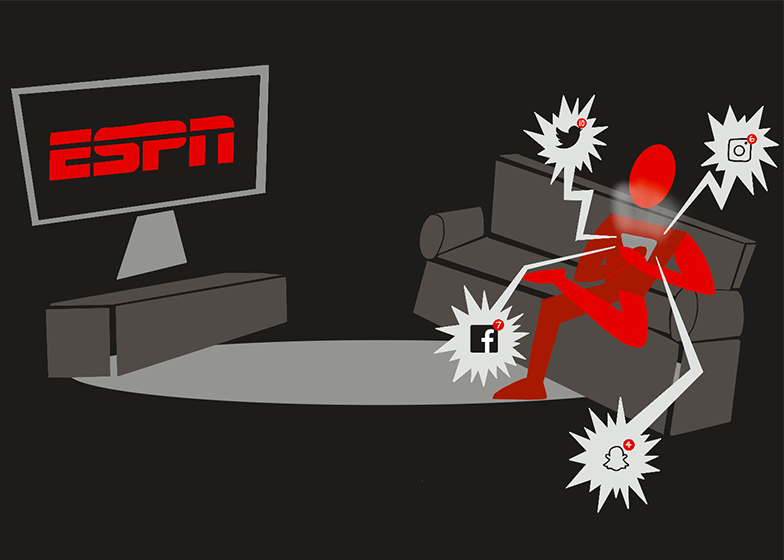 The emergence of social media has changed the way many industries operate. From updates on scores to real-time highlights and postgame content that makes morning-after print stories look archaic, sports journalism is no exception.

Platforms like Instagram and Twitter have become an integral part of sports reporting and have started to take over many traditional platforms, including newspapers and television.

Kyle Cajero, the Pepperdine graduate assistant for athletic communications and social media, said the most important way to connect Pepperdine Athletics with the fans during the pandemic has been through social media.

“I would argue that social media presence is more important than traditional journalism, especially in the Los Angeles market,” Cajero said. “For sports at Pepperdine, social media is more valuable than ever because the LA Times is not going to come to campus and cover us, so getting the word out there any way you can on Twitter or Instagram gives us more traffic.”

Social media is now one of the most important parts of the sports experience and has changed the way information from games and athletes is expressed. People have access to hundreds of different sources of information, regardless of a person’s credentials. Platforms such as Barstool Sports and “The Pat McAfee Show” offer new content that utilizes social media apps to create content for their fans.

“Everybody is a content producer now because they all have platforms and phones to create and distribute content,” Krutzsch said. “Everything we do now from an event planning standpoint is focused on creating content for our channels to build awareness for our event.”

Alumnus Arthur Puu, a former Graphic writer, works on the social media team for ESPN. He said social media outlets cater to the consumer in a way the industry has never seen.

“All of these methods, in essence, help the average fan,” Puu said. “Growing up, we didn’t really have that. We would have to sit and watch a three-hour game or ‘SportsCenter‘ after to know what was going on.”

Cajero said Twitter has been the most valuable platform for him, as it provides him with updates quicker and easier than other social media platforms.

With nearly every game, stat and story at the fingertips of a worldwide audience, social media in sports can lead to some minor downsides.

Puu said the abundance of coverage can sometimes take away from sports and the athletes.

“Now, there’s just so much information out there,” Puu said. “It’s not completely a bad thing but say, for example, you saw five straight posts about LeBron James; it can get very repetitive and takes away from the game. It’s sometimes hard to sift through.”

“Everybody has the ability to break news at all times and we used to have specialists that would chase stories,” Krutzsch said. “I can only imagine that this will continue, and I am curious to see what kind of content develops when events return to full capacity again.”

When live sports returned after the COVID-19 shutdown, viewership did not pick up where it left off. The 2020 NBA Finals had the lowest recorded television viewership rating in league history. Data from Forbes suggests the intertwining of sports and politics played a significant part in the viewership plummet.

Puu said the fusion of politics with sports and empty stadiums contributed to the historically low numbers.

“Going to a game live is such a big part of it,” Puu said. “Being able to see the players and sometimes interact with them gets so much more engagement. And with the political situations that were going on, from kneeling for the anthem or Black Lives Matter protests — right or wrong — it definitely turned some people away from it.”

What’s Next For Sports Journalism

“ESPN is trying to make their content essential to viewers,” Ravech said. “And they’re doing their darndest expanding their platform — just look at ESPN+. Numbers might be down, but I don’t think it’s a drought. People want everything immediately, so companies like ESPN have the challenge of how to adapt.”

Puu said he sees a focal point in the ESPN social media department: availability of content and reaching a worldwide audience.

“The biggest thing for the big companies is how it will reach a further audience,” Puu said. “Not just other parts of the country but other parts of the world. Think about how Twitter Spaces and Clubhouse are trying to bring similar interests together — maybe there’s a way for sports to do that.”

Cajero said creating a strong following on social media requires personality, and those that do not have one will struggle even if their work is good.

“You need to sell yourself as a presence now more than a body of work,” Cajero said. “I feel like speed over accuracy is more important now. I don’t really like that this is the case right now, but unfortunately that seems the way things are headed now.”

Ravech said while the 2020-2021 sports calendar had reasons for concern, sports and how they’re covered aren’t changing overall.

“Regardless of anything that happened this year, live sports are not going anywhere,” Ravech said. “There’s no substitute for it. There will always be people that may prefer to watch a three-minute highlight after the game, but the live experience will exist forever.”

Cajero said social media has affected sports journalism and has seen it first hand in the places he has worked.

“I worked at a newspaper in Idaho for a year, and the hardest part was that they were not tech savvy and did not know how to break news on social media,” Cajero said. “Working within an organization like that taught me the gap between people who grew up in the digital age and those that did not. One of the guys I worked with did not even have a cell phone.”