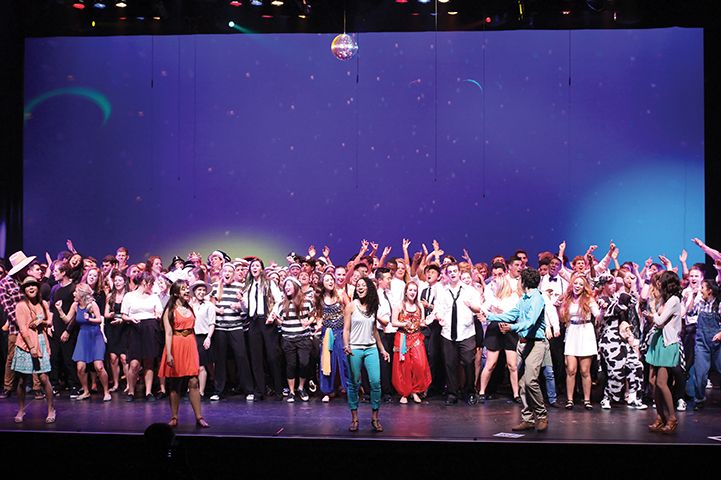 In a school abundant with passion for the arts, it’s not a surprise that Songfest is one of Pepperdine’s most beloved traditions. This year’s show will honor the tradition by captivating audiences with outstanding performances and dazzling lights, as the theme is “Bright Lights, Big City.”

Songfest took place for the first time in the spring semester of 1973 — the same academic year Pepperdine’s Malibu campus opened. Since then, this production has been extremely popular among students. It is an opportunity to hone one’s creative side while participating in an event that has become a Pepperdine legacy.

There are seven groups who will vie for the first place prize, the Sweepstakes Award. Judges score the groups based on categories such as theme, music, choreography, sets, costumes and enthusiasm. “We never release the names of judges ahead of time as they are constantly changing,” wrote Campus Programs Coordinator Brittany Chin-Lee. “Some are community leaders, artists, performers, entertainment industry professionals, and members of the Pepperdine family.”

Each routine has a 12-minute maximum time limit, of which only two and a half minutes may be spent on dialogue. Songfest will be performed in Smothers Theatre through Saturday.

Students participating in Songfest not only perform, but also organize the show. They write scripts, choose songs, choreograph dances and create sets and costumes. Their rehearsals have gone on for two hours on a daily basis for the past three weeks, with the exception of spring break.

“Coming back after spring break and not remembering any of the dances that we had learned before was not fun,” freshman Gamma Phi Beta member Sarah Reichenbach said. She is part of the Kappa Gamma Chi and Friends group. Their group incorporated modern-day songs with a classic story, putting their own spin on the widely beloved “Wizard of Oz.”

Similarly to the previous group, Alpha Tau Omega, Delta Delta Delta and Friends will take audiences back in time. Their storyline is based on the Chicago Fire of 1871.

Another group that will take the audience back in time is Delta Psi Theta and Friends. With their use of multiple classic songs, they portray the city of Memphis. The story follows a young girl who follows her heart to achieve her greatest goal. It is a soulful performance by an energetic group.

“Getting to know the other people in my group has been the best part of Songfest,” freshman Kappa Alpha Theta member Brooke Hinds said.

The Sigma Phi Epsilon, Alpha Phi and Friends group tells the story of a family that is waiting to see their dreams become reality in NYC. Their performance teaches people to never give up, no matter how impossible achieving a goal may seem.

Eta Theta Tau will also teach the audience that dreams are obtainable as they achieve the seemingly impossible. While they are in Alcatraz, they decide they want a second chance at a good life. This non-Greek group came up with fun routines that participants performed with much energy and great coordination.

“Getting down the choreography [and] getting everyone to be on the same page is very difficult, but also pretty enjoyable,” said freshman Truman Clark.

“The biggest challenge was that our city (Mumbai) is so culturally different, so respecting the culture and portraying it in a colorful and beautiful way,” said senior Pi Beta Phi member Courtney Germann of group, Pi Beta Phi, Delta Tau Delta and Friends. “I’m excited to go out there and have a great time. Our songs are so upbeat that we are just excited to do it.”

Finally, the non-Greek Gamma Ghkkkkket Sigma group also gave audiences a glimpse of another culture and a peek into history by basing their story on European royalty (London). Their storyline places a great emphasis on working together and helping those around you. This group’s use of classic songs from musicals will bring a smile to people’s faces this week. The participants appear to enjoy their performance, and seem genuinely happy to be on stage.

“We are all so excited and really proud of our show,” senior Shannon Courtney said. She is the Gamma Ghkkkkket Sigma group’s producer, and has been working on the production since September.

The winning group will be announced on Saturday night after the last performance.

This year’s production is hosted by six Pepperdine students. The hosts and hostesses welcome the audience into the show, cleverly introduce each number and end the show energetically. “Bright Lights, Big City” is an opportunity for audience members to travel the globe and be mesmerized by upbeat routines and enthusiastic performers.

Tickets can be purchased at Smothers Theatre, or online at Pepperdine’s Center for the Arts website; they cost $10 for students with a valid Student ID, and $20 for everyone else. The Friday and Saturday night shows are sold out.