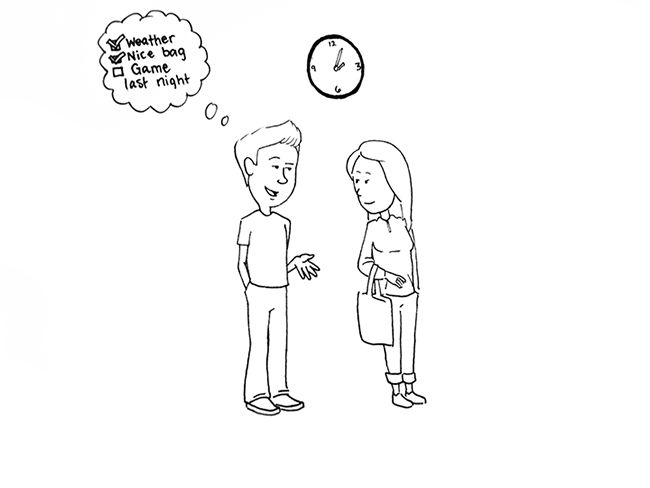 We’ve all been through it: You’re walking to class, and you pass someone you know. They say hi, so you’re obligated to return the greeting. Thus the small talk ensues and the distracted smiles and head nods continue.

It’s not that you don’t want to say hi or see how they’re doing, but on the way to class isn’t exactly the ideal time to hear someone’s life story. We’re all busy.

Truth be told, we often don’t have the time for long, deep conversations between classes. But in the brief time that we do encounter our fellow students, we should strive to make those encounters matter in the moment. Not just an exchange of a couple of monotonous words.

Whether the person is a close friend or someone from one of your classes last semester, they still deserve their due time. The person you pass in the hall might also be in a hurry, but even when it’s brief, sincere interaction can make a difference in someone’s day.

As was eloquently depicted in the Reelstories student film grand prize winner “Behind the Faces,” every student has a story worth hearing. Even when we aren’t afforded the time to acknowledge those stories to the extent they deserve, we can still be intentional about how we interact in that short time.

Because this is something we all face, we’ve come up with a list of some common issues that come up and tips on how to make our interactions in passing meaningful.

For many of us, our “walking to class” face is a lot more unwelcoming than we mean it to be. It can be easy not to look at the people around us when walking somewhere, but being aware of those around us is just as important as not tripping when going down the CCB stairs. Also, staring down into the screen of your phone isn’t going to help the situation.

Pepperdine is a mid-sized campus. We can’t pretend not to know people, but we also can’t be close with everyone. The people we encounter aren’t anonymous, but they may not be our best friends either. When it comes down to deciding whether or not to say anything, reaching out really is the better option. A welcoming, sincere smile and/or a friendly hello is always better than nothing.

We often start with empty greetings, such as the “Hi, how are you?” that is said more out of courtesy than curiosity. The response is always “good” or “busy” or “tired.” It’s not that these responses are bad, but they’re often shallow. We should ask how people are doing, but only when we have the time to really listen to the answer. Instead, try wishing someone a good day or giving that person a genuine compliment. This provides the opportunity for real interaction while still respecting each other’s time.

Though less common, there is also the problem of over-sharing. This often leads to merely nodding in response to the person’s story while thinking about how you’re going to be late for class. Instead, try telling the person that you’d like to hear their story when you have the time to really listen — and then actually make time for them.

On the other side of the spectrum, don’t schedule a time to meet up with someone if you don’t have the intention of listening to what they have to say. Here is when the decision of whether to sink or swim comes in: Do you have any intention of spending time with this person outside of this casual interaction, or will you both go off on your separate ways?

If you don’t plan on going out of your way to spend time with this person, then we risk falling into the trap of saying, “We should hang out sometime,” and it never actually happening. If you’re going to make plans, go for it; but only suggest or agree to something when you’re willing to commit. Don’t lead the person on by making plans that won’t be kept.

Finally, it is difficult to really say goodbye when you and the person continue to go your separate ways. Take the time to actually say goodbye, even if that means shouting it semi-awkwardly as you both walk away.

These interactions are experienced by students pretty often all around campus. Instead of making these conversations as awkward as they often are or can be, let’s put in the effort and do our part to make these small interactions meaningful.