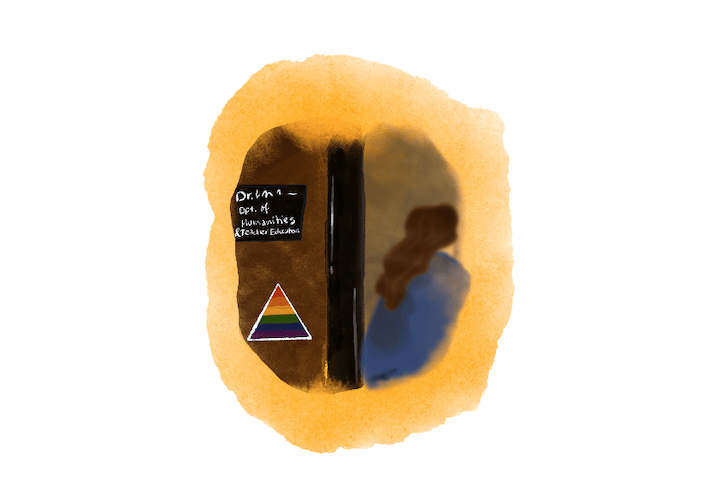 At Pepperdine, one can find stickers on professors’ doors signaling the office as a safe space. Email lines for some identify personal pronouns, and there are many faculty and staff who speak to challenges the LGBTQ+ community faces on our campuses — and their willingness to love and support these students all the more.

Students have been on the front lines of creating and growing the LGBTQ+ community on Pepperdine’s campus. Behind them exists faculty and staff who have been voicing their support for and seeking ways to extend support to the community.

“I know countless individuals who provide student care and support for LGBTQ students. I couldn’t even begin to list them off because there are so many,” University Chaplain Sara Barton said. “So I’m thankful for that, that there is care and I have witnessed it and seen it.”

The Road to Crossroads

In fall 2015, Prof. Maire Mullins suggested faculty watch a video that demonstrated how important it was to be inclusive in their language. Karen Martin, then-president of the Seaver Faculty Association suggested Mullins work with students to get an LGBTQ+ club on campus if she felt strongly about it.

Mullins began drafting then “Pepperdine Pride” with David Hylton, a senior at the time who would go on to become Crossroads president. Mullins and Hylton edited the “Pepperdine Pride” statement to focus on the mission statement within the Pepperdine mission and specific service activities the club could participate in. She looked up the Trevor Project and talked to faculty and students.

“What they told me was that there was a very large or substantial community at Pepperdine of students who were feeling isolated and depressed and they didn’t feel that there was anywhere they could go to feel safe to talk about their identity,” Mullins said.

Jason Sim, the other co-president of Crossroads and a junior during this time, mentioned the lack of support from faculty could add to a lack of inclusivity.

“So I thought about that and said to myself, ‘I know many faculty who would support the creation of this club and would be behind it,’” Mullins said.

Mullins began sending out emails to faculty, asking them if they were willing to sign a petition to make and support the club.

Mullins received the names of people who were not tenured, who were adjuncts or who didn’t feel safe having their name published. She made a list called “silent allies.” The petition started with 10 signatures and reached 52 faculty and 25 silent allies.

“So I think what motivated a lot of the faculty had to do with that concern for students because, as faculty, we’re on the front lines — we see students every day and we know,” Mullins said.

Mullins brought the numbers to Hylton and Sim to include in the proposal. The proposal went to SGA, then administration and the Board of Regents. Mullins had several administrators approach her afterward to thank her personally.

“They were grateful that this had happened and didn’t know why it took so long,” Mullins said. “There are small moments like that where you get a flash and you say to yourself, ‘Yeah, that’s Pepperdine.’”

Mullins has also advocated to faculty for a sign outside their doors to signal a safe space.

“We understand that we’re part of higher education. I think that really helps us in understanding how to be as a university and how to interact and be more open and tolerant and understand the discourse of the culture,” Mullins said.

A Home in the Arts

“I feel like the artistic community on campus is certainly a place where we ought to be accepting of those members of our student body because there are so many members of our profession who are members of that community,” Griffin said.

Griffin said he gives students in his theater history class a list of plays of historical significance to choose from. When he looks at that list, he starts asking himself if there is enough representation. He had two out of his 19 students write to him afterward, telling him it was exciting to see a playwright who looks like them or cares about similar issues.

“It’s also something that is really exciting because those students are having a window open for them that allows them to say, ‘There’s a place in the world of professional theater for somebody who looks like me, or for somebody who has an orientation like me,” Griffin said.

Griffin participated in the first cohort of SEED (Seeking Education Equity and Diversity) in 2016. He joined because he was interested in issues of equity and diversity on campus. SEED made Griffin more aware of institutional biases and led him to change his theater history syllabus as a result of it. SEED is a year-long equity and diversity program for faculty and staff with monthly meetings and summer training.

“In the process of educating yourself about those biases or about those lenses that you may be looking through as you look at the world, then you suddenly realize, ‘I need to change the way that I’m teaching this class because I don’t think that it’s an open and inviting learning atmosphere for every student in this class,’” Griffin said.

Griffin said he, along with his colleagues, have had their personal beliefs differ from what a student believes, but would not allow that to affect how they treat the student or offer assistance or help to the person.

“I would not call that a negative response,” Griffin said. “I’m with you because I think we’re going to disagree, but I still want to be able to mentor you in terms of this class or this situation that you’re in.”

Theatre majors know each other for the most part, but Griffin said he still starts each semester with introductions. He has them say what year they are at Pepperdine and their pronouns. Coming from SEED, Griffin said he does not know if their pronouns have changed since last semester. So far, he said he has not had anybody change their preferred pronouns, but he wants his students to know that would be OK in the classroom.

“So I think that’s one way without me doing a speech about LGBTQ rights — that’s one way for me to say it’s OK here to be who you are in this class,” Griffin said.

Griffin has also added “he, him, his” in his signature line on his email. A few years ago, Griffin said he wouldn’t have understood why people did that.

“But you know, the more that I become educated, the more I realize that is a sign to people who don’t necessarily identify with the gender that they present,” Griffin said.

Mullins shared her experience at Barton’s house where she hosted dinners for the LGBTQ+ community.

“That was a few years ago when we were trying to get the club up and running and the hospitality there and that intentional kind of Christian message of tolerance and openness was one that I did greatly appreciate,” Mullins said. “And I know our students did.”

Barton said the LGBTQ+ community is one group she was sure to extend hospitality to. Sharing a meal is a “global way of being,” as Barton called it, and a place to be together as human beings.

Barton said she sees herself as the chaplain for everybody: faculty, staff and students. Her door is open to every person, a commitment she has held since she arrived six years ago.

The Westboro Baptist church, a group known for criticizing the LGBTQ+ community, picketed outside Pepperdine’s entrance in February 2019. Barton’s office partnered with Crossroads to host an open house to provide a comforting place in the midst of a hate group on campus. Her office also partnered with SGA to make signs that said, “God loves.”

“We got signatures from thousands of people in the Pepperdine community and hung those signs at the entrances of our campuses when the protest was going on,” Barton said. “I wanted that sign to emphasize that God does not hate anyone because that’s a message that some people want to place on God about LGBTQ people in particular.”

Barton hosted Table Talks, a program that covered a variety of topics for the Pepperdine community. She invited a gay Christian student, Cameron Hart, who shared his experiences of coming out in the context of his fraternity. She also invited a Church of Christ preacher from Georgia, Don McLaughlin, who spoke on how he navigates conversations about LGBTQ+ in his family and in his church. Among the 400 attendees were then-President Andrew K. Benton and Cameron’s mother.

“I think I and others were touched by how much support he received from his fraternity and from the community. So seeing him receive love and support in the community, it was meaningful for me,” Barton said.

Hudson Casiple, Student Affairs intern and alumnus, said he has had brothers in his own fraternity come out to him or to the fraternity before the world at large because they felt comfortable.

“They felt that safety net and that security,” Casiple said. “The reality is, like, if you’re in this seemingly hyper-masculine sphere and you feel comfortable enough to come out to those guys, then there’s nothing stopping you from that.”

Casiple said Greek life offers this connection to a community that can help people come out or feel comfortable with their sexuality.

“And so no matter who I am or who I claim to be, that won’t take away that connection,” Casiple said. “So you almost feel comforted by that literal oath that everyone has taken that binds us as a brotherhood — that no matter what I end up saying or doing about myself, that connection is still there.”

An approach to diversity and inclusion goes beyond ethnicity and race.

“That’s something that’s easier to gauge in Greek life because the reality is you could just visually observe that sort of diversity,” Casiple said. “But when it comes to sexuality, you really don’t know how diverse you are unless people have the courage to come out and say it. For those who came out after joining their organization, I feel like that speaks to the ability of the organizations to help really anyone in general feel comfortable, safe and loved regardless.”

Greek life is trying to start the conversation on diversity and inclusion, Casiple said. They have promoted holistic diversity with the idea that the more different members are, the more the organization will benefit from it. These differences allow people to appreciate the sameness that is there.

“But they’re still in that organization,” Casiple said. “So it also benefits individuals at an individual level of helping them appreciate and understand the humanity of someone else just on the merit of being in an organization with the same values as them.”

Common humanity is what allows people to better understand and empathize with one another, Baton said.

“I think our common humanity is what brings us together,” Barton said. “Everyone has a story. Every single person has a story to share and learning to see our place in the one human family. That’s where I think we start to accept each other — and even if we have opposing beliefs, if we start with our common humanity, that’s the best place to start. That’s what we have in common.”

Why We Should All be LGBTQ+ Allies 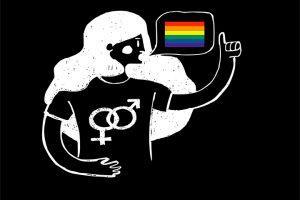 Why We Should All be LGBTQ+ Allies

Art by Samantha Miller What does it mean to be an ally to the LGBTQ+ community? Junior Cameron Yarbrough, who is straight,...
Copyright 2013 Jupiter Premium Magazine Theme
Back to top