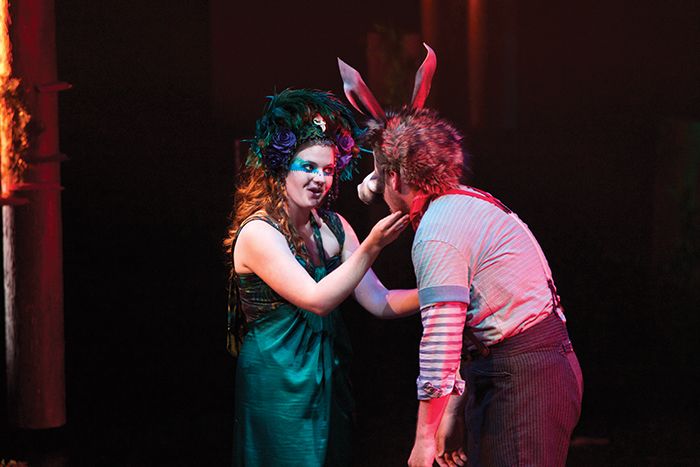 This work is considered by many to be Shakespeare’s best and most beloved comedy. Director Jason Chanos explained that Shakespeare did many commissioned plays, but “A Midsummer Night’s Dream” was one that wasn’t.

“The reason I like this show is because you get to see what Shakespeare liked to write,” Chanos said. “I think he had a very complicated love life and likes to explore those themes in his plays. And here you go — you get to see love in all its different incarnations, but in the end he does see hope even if it does require a little magic.”
The play follows three different story lines that are ultimately interconnected by magic and feuding.

During the first act, Egeus (senior George Kovalenko), forbids his daughter, Hermia (senior Marina Moore), to marry Lysander (junior Tyler Burk), who she loves. Egeus instead wants Hermia to marry Demetrius (senior Tyler Fromson). Hermia and Lysander steal away into the night to escape Egeus. When Demetrius finds out that the two lovers have fled to the forest he goes after them with his devoted ex-fiance, Helena (senior Jordan Kimmel) following him.

The forest is home to Titania (junior Kelsey Sutton), Queen of the Fairies, and Oberon (senior Ryan Napier), King of the Fairies. Oberon tasks his jester, Puck (senior Courtney Buchan) to place a spell on Demetrius — whom he witnessed pushing Helena away — that will make him fall in love with the first woman he sets eyes on after the spell is cast. Presumably this woman would be Helena, but as luck would have it, Puck places the spell on not only Demetrius but also Lysander. Both lay eyes on Helena and fall madly in love with her. Helena believes them to be mocking her, and Hermia fights to get Lysander’s love back, not understanding why he is suddenly spurning her. 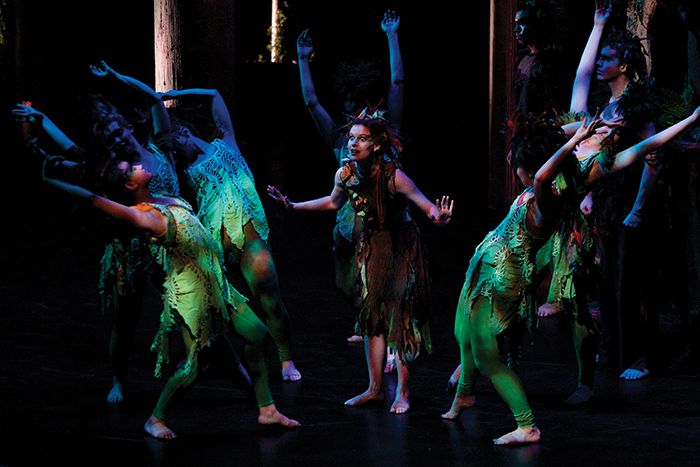 When Oberon discovers the chaos Puck’s mistake is causing, he orders him to give Lysander a remedy to the spell so that he will once again be in love with Hermia. The original spell is left on Demetrius, who stays in love with Helena.

Alongside the lovers’ storyline, we see a mismatched group of traveling actors. They provide comic relief in the midst of the lovers’ dramedy. Puck turns Bottom’s (senior Michael Thomas-Visgar) head into that of an ass and the rest of the group flees from him in fear. Meanwhile, Oberon has placed the love spell over Titania and when she awakes the first person she sees is Bottom, with whom she promptly falls in love.

When Oberon discovers with whom the Queen has fallen in love, he gives her the remedy and orders Puck to release Bottom from the ass head.

During the second act the couples get married and the traveling group of actors performs for them. This comedic performance is one of the best of the entire show and will leave you in gales of laughter.

Chanos explained that the cast has been in rehearsals since January but did not come together as a company until the beginning of March.

“There were a lot of other projects going on in early January and February … so we sort of had to thread the needle to find rehearsal time,” Chanos said. “It was table work in the beginning to be sure they understood what they were saying.”

For such a short time together, the chemistry between the actors, particularly Burk and Moore, is excellent and adds to the magnetism of the show.

The set, which Chanos explained was inspired by what the Athens forest looks like and other exotic settings he looked into, holds as much magic and wonderment as the show itself. 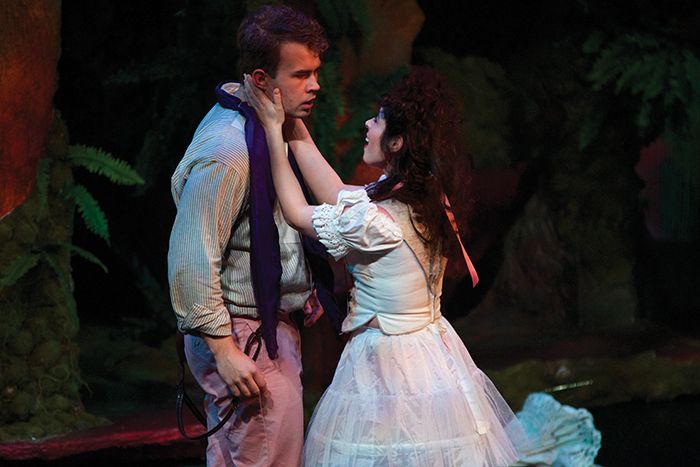 “I think it’s spectacular visually. I think it’s going to be stimulus overload. I would compare it to like Cirque Du Soleil, except with Shakespeare. It’s got a very tribal kind of earthy spectacular quality to it,” Chanos said.

A rotating centerpiece provides a change of scenery for every scene and a place upon which much of the farcical elements of the show occur.

Even if the Shakespearean language seems daunting to you, “A Midsummer Night’s Dream” is still worth it. The plot is easy to follow and you fall right into the world of the play without getting lost in the language.

“If you want to see what the Pepperdine Theatre Program can do, this is it. We’re taking on a challenging author and bringing all our talents to bear and we can work it,” said Chanos.

Get your tickets for the last show of the year before they’re gone. 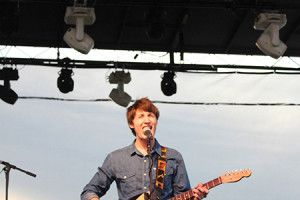