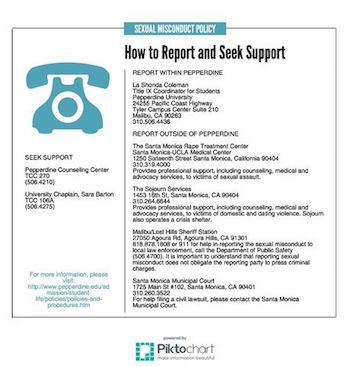 Students from all Pepperdine schools received an email regarding Pepperdine’s sexual misconduct policy from the Office of the Vice President for Student Life on Sept. 9, ahead of Sexual Assault Awareness Week, which began Monday.

The email stated that Pepperdine prohibits sexual misconduct and is prepared to receive reports and offer resources, also calling on students to “think carefully about, and be aware of, sexual misconduct.” The text included links to the updated sexual misconduct policy in the student handbook, though recent changes were not directly announced. A Title IX handout and an online interactive course through the Campus Sexual Violence Elimination (SaVE) Act were also included.

This year’s email is part of an ongoing effort to increase outreach to students regarding sexual misconduct, said Vice President for Student Life Mark Davis.

“Mainly what we’re doing is just trying to make sure that the word gets out to all students about our sexual misconduct policy and also prevention efforts,” he said.

While changes to Pepperdine’s sexual misconduct policy are ongoing, Davis said that efforts to educate students in all Pepperdine schools have been of particular interest since the Office of Civil Rights released a Dear Colleague Letter in 2011 stating that it is expected that prevention efforts be required among all students, and not limited to freshmen.

Previously, Pepperdine provided direct training on sexual misconduct only to first-year students in partnership with Housing and Residence Life and the Santa Monica Rape Treatment Center.

This is the third year the email has been sent to all students.

“As we, over the last several years, have been reviewing our outreach and prevention, we decided, well, that was a model program, [and] more could be done for returning students and also students who don’t live on campus throughout all of our graduate programs,” Davis said.

Pepperdine created a SaVE team to address these issues three years ago, Davis said. The team is composed of four committees with representatives from all Pepperdine schools: Education, Policy and Protocols, Response and Disciplinary.

Davis, who chairs the Policy and Protocols Committee of the SaVE team, said the policy is reviewed every summer for clarity, necessary updates based on past year’s experience, legal compliance and its fit with guidance put out by the White House Task Force for Sexual Assault and the Office of Civil Rights.

Changes to last year’s policy include clarification on getting confidential support from the Counseling Center or Chaplain’s office and making a confidential report to the University through the Title IX Coordinator for students, Davis wrote in an email to the Graphic.

This year’s policy also reflects a change in nomenclature for parties involved in sexual misconduct. Pepperdine’s policy refers to the reporting party as the “complainant,” and now refers to the accused party as the “respondent” instead of “alleged perpetrator” to reflect neutrality and “avoid any appearance of bias in our procedures,” Davis wrote.

Associate Vice President and Senior Director of Counseling, Health and Wellness Connie Horton chairs the Education Committee. She said providing education has always been a priority, but the team is now more coordinated and organized in their approach to spread this information across the University.

The email was is a “first step” toward more comprehensive education programs on the topic, Davis said.

“I think it’s effective at making sure that everyone receives the message and they get the information about how to access certain programs to make a difference, but it doesn’t in any way serve as an effective call to action, nor does it really express any sort of empathy to people who are in real life dealing with it,” she said. “It kind of makes it seem like a regular issue of, ‘oh, did you read the handbook?’”

Horton said the email format was not ideal, but disseminated the information to everyone.

“We don’t kid ourselves, like oh, good, everybody’s watching that and taking it seriously,” she said. “We know that many are not. That’s why we’re doing lots of other programming, passive and active.”

The email also encouraged students to get involved with Pepperdine’s bystander intervention program, StepUp, as well as “It’s On Us,” a program sponsored by the White House that focuses on fostering community responsibility for the prevention of sexual violence. Horton said first-year hall presentations have been adjusted to reflect this community-oriented way of thinking, though this change has also been a long time coming.

Davis said the overall goal is to address the issue of sexual misconduct as a community.

“At Pepperdine, it’s more of a holistic approach where we’re partnering together with faculty and staff from all different departments and students to really change the climate and to address these concerns together,” he said. 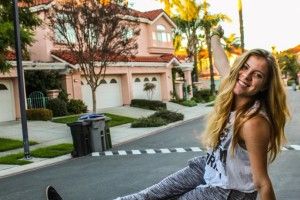 Courtesy of Amanda Langston “I actually knew my passport number before I ever even knew a home address; I knew international...
Copyright 2013 Jupiter Premium Magazine Theme
Back to top