‘Scary but Doable’: Pepperdine Student Shares About Life With COVID-19 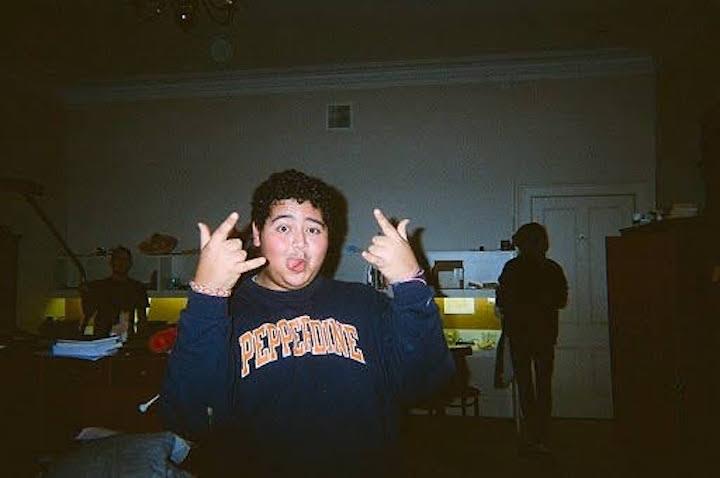 Cameron Zohary in his bedroom in the Pepperdine London House. Zohary said it was an adjustment moving from a shared six-person bedroom to self-isolation in his childhood home. Photos courtesy of Cameron Zohary.

When Cameron Zohary sets his mind on something, he’s going to see it through, whether that’s school, going abroad or fighting COVID-19.

Zohary is a sophomore Business Administration major who can often be found with a group of friends, boba tea in hand, wearing a Pepperdine shirt and a huge grin. Known for his stick-to-it attitude and endless positivity, Zohary doesn’t let anything slow him down.

While abroad in London for this spring semester, Zohary encountered a new obstacle: COVID-19. Zohary is one of eight students in the Pepperdine London cohort who have tested positive for COVID-19. Catching the virus quickly changed his world — he went from traveling Europe to quarantining in his family’s basement — but Zohary isn’t letting this get the best of him.

“It’s scary but doable,” Zohary said. “It’s a really tough time, but we can get through this.”

Zohary wasn’t aware of Pepperdine’s study abroad opportunities until coming to campus freshman year. But after going to The Return, he decided to apply for Buenos Aires, London and a D.C. internship.

“My parents told me I wouldn’t be able to study abroad, and then I signed three contracts without them knowing,” Zohary said, laughing.

Zohary said studying in London was great, and during his time there, he traveled to five different countries. But his favorite aspect of studying abroad was the people. 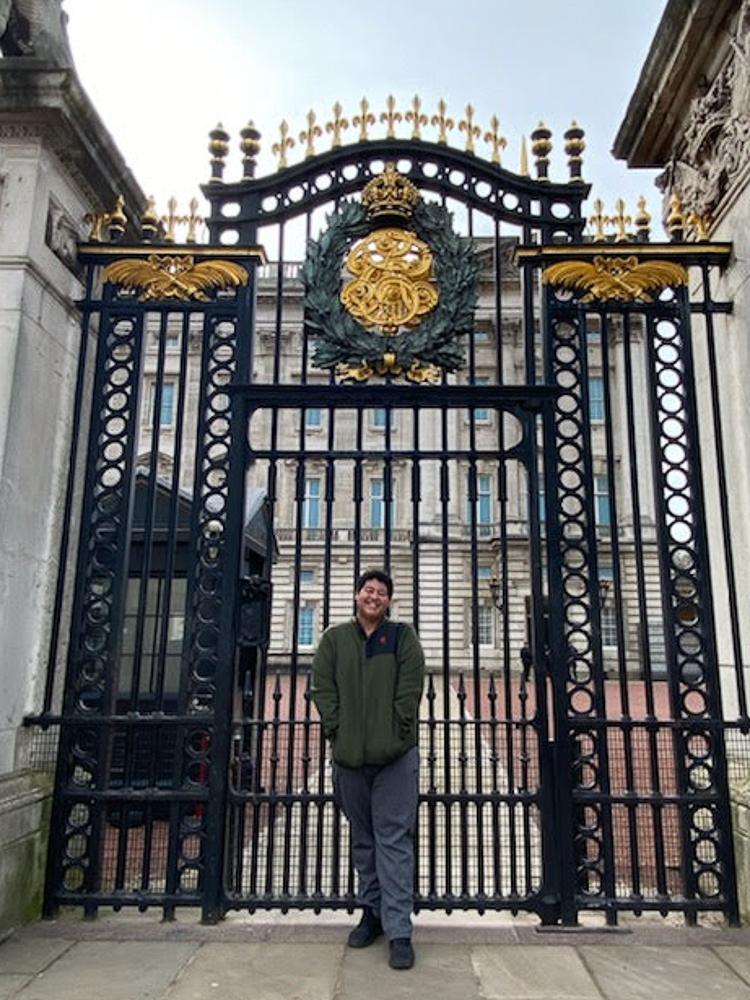 Zohary outside the gates of Buckingham Palace. This photo was taken on a disposable camera and is one of the few photos Zohary has from his time in London because his phone was stolen in Spain.

“I really like the community — the people were amazing. ” Zohary said. “I was the SGA representative, so I got to partake in a lot of the community building.”

As SGA representative, Zohary and his team planned various social events such as a trip to see Cirque du Soleil and a “Harry Potter” studio tour. His favorite memory from London was a Valentine’s Day event where the students wrote each other kind notes and shared a lunch together.

“We could tell that there was just so much love in the air,” Zohary said.

The spread of COVID-19 throughout Europe cut short Zohary’s time abroad. On Feb. 26, the Florence program was suspended, and London received travel restrictions limiting students to certain zones in the city.

Classes in the European international programs are Monday through Thursday, giving participants three-day weekends that many use to travel around Europe. The travel restrictions were announced early Thursday morning GMT, leaving London students less than 24 hours to cancel any travel plans they had made.

“I was going somewhere that had zero COVID cases, so it was frustrating at the time — I didn’t understand it.” Zohary said. “Why can’t I go to Iceland, but people from the Malibu campus can come to London [for spring break]?”

Over the next week, the program stayed in London and watched as Heidelberg and Lausanne went home and their Educational Field Trip (EFT) to Jordan was canceled. Zohary said he noticed a shift in the mood of the program; everyone knew they were going home, it just became a question of when. For his part, Zohary tried to not have a defeatist attitude and planned to make the most of his remaining time in the city.

“One of my friends was like, ‘You’re the only person who’s happy we’re still here,’” Zohary said. “And I was like, ‘Of course I’m still happy that we’re here. We’re in London, one of the greatest cities in the world. We have to enjoy ourselves.’”

After the travel restrictions went into effect, Zohary said SGA representatives were asked to increase event planning and organize something every day of the weekend so students would be encouraged to get out of their rooms and enjoy their time in London.

Program participants learned March 10 they would return home that weekend, and Zohary said it almost came as a relief to students. Instead of anxiety over when they might leave, participants were able to have their last moments and say their goodbyes knowing they had a definitive end date.

The public atmosphere in London didn’t change much while they were there, Zohary said, with few people wearing masks outside and even less confirmed cases in proximity to the Pepperdine program. Some of the London participants had autoimmune deficiencies or asthma, which could make them susceptible to the disease, but no cases were confirmed within the program until after the students arrived back home.

The first email came March 16, two days after participants returned home. Someone in the group tested positive for COVID-19, and due to their close proximity in the final days of the program, they were all possibly at risk.

Zohary had been sick on-again, off-again since fall 2019 while studying in Buenos Aires, and his symptoms persisted while abroad in London.

“I was coughing pretty much the entire semester,” Zohary said. “I started showing more symptoms two hours before we got the first email that someone had tested positive with coronavirus, and then I started freaking out because if someone has it in the house, I’m sure at least half the house does [now].”

Zohary received testing shortly after getting the first email from Pepperdine. Within days, several program participants tested positive. As of March 30, eight students in the program tested positive for the virus, according to a University email sent March 30. Due to the small size of the program and the proximity in which students lived and studied, it is likely many more had mild symptoms or were asymptomatic.

“There were so many people who had symptoms and were unable to get tested,” Zohary said, noting a peer who had a temperature of 103. “I only got a test because I explained my situation and I had some symptoms, but my symptoms didn’t develop fully until later on.”

The University has kept all COVID-positive students’ identities private and has reached out to those with whom the students were in close contact. Zohary informed the University of his positive results and then alerted his peers personally through their cohort group chat. Four other students have informed the cohort that they were the ones who tested positive, Zohary said, but the others have chosen to remain anonymous.

“Even though I was the fourth person to get it, I was the second person to come forward and say I had it,” Zohary said. “We were in the group chat like, ‘You don’t have to be ashamed. We’re here to love and support you. We just want to know how concerned we have to be.’”

Zohary said he’s thankful he had a mild case, but that didn’t make his recovery any easier. His symptoms have included a cough, dry throat, fatigue, loss of appetite, dehydration and diarrhea.

“During the time that I had coronavirus, I was eating one small meal a day, and I actually lost 35 to 40 pounds,” Zohary said. “So we love a skinny queen.”

He began self-isolation March 16 after learning one of his peers tested positive. Following his own positive result, Zohary moved into his family’s basement as he began the slow process of recovery.

“My doctor told me that COVID normally lasts for 30 days, so after the mid-point, I knew I wasn’t going to die,” he said. “It’s a little bit worse than the flu, but I know I’m not going to be hospitalized or anything like that.”

He was still in the middle of classes, however, and finished his coursework from quarantine.

“All the professors were amazing,” Zohary said. “With my fatigue, I couldn’t keep up with the course load. [But] all their lessons were recorded, so if I wasn’t feeling well, I could miss one and watch the recording.”

Both the program director and his professors were generous with extensions for any essays, projects or tests he had. Given the point in the semester, he said it wasn’t too difficult to finish remotely, as he had only a few assignments left excluding finals.

Zohary said he has maintained his positive attitude through it all and has turned to joking about his experience on social media.

“I was FaceTiming my friend, and she was like, ‘You know you’re going to have clout for life for surviving corona,’” Zohary said. “So I started tweeting about it. l literally had a dream that I was just walking outside — that’s the mental state I was in. I try to keep everything light.”

“I only kept it up for three days though,” he said. “I got too fatigued and I couldn’t keep learning TikTok dances.”

Now that he’s recovered, he said life is pretty much the same. His home state of Virginia has a stay-at-home order in place until June 10, so he’s passing the time until then with Netflix, Animal Crossing and Mario Kart.

“I beat Mario Kart, which I didn’t know was a thing,” he said. “I got first place in every race on the hardest level.”

While recovery was hard, Zohary said having a strong support system made it much easier. Zohary said he is thankful for everyone who has and continues to support him during this time, including friends, family and the county health department, which called him every day to record his temperature and his symptoms. Zohary is the only member of Fairfax County, VA, to recover from COVID-19.

“You can literally talk to anyone and be like, ‘Hey, how’s your quarantine going?’ and everyone will have a story,” Zohary said. “It’s such a unifier.”

To those looking to encourage and support loved ones with the virus, Zohary said one of the best ways to help is to be there for support but give distance as well.

“Definitely don’t badger them — it felt exhausting telling the same 10 people every day the same symptoms,” Zohary said. “Offer to be a shoulder to cry on, but don’t make them cry on that shoulder.”

For anyone currently dealing with COVID-19, Zohary encourages them to stay strong, lean into their support system and know they’re not alone in this fight.

Inequality: What It’s Like to Be Black During COVID-19 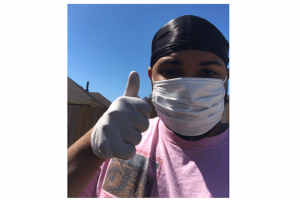 Inequality: What It’s Like to Be Black During COVID-19

Junior George Preston wears gloves, a durag and a mask to protect himself from COVID-19 as he steps out into his neighborhood...
Copyright 2013 Jupiter Premium Magazine Theme
Back to top