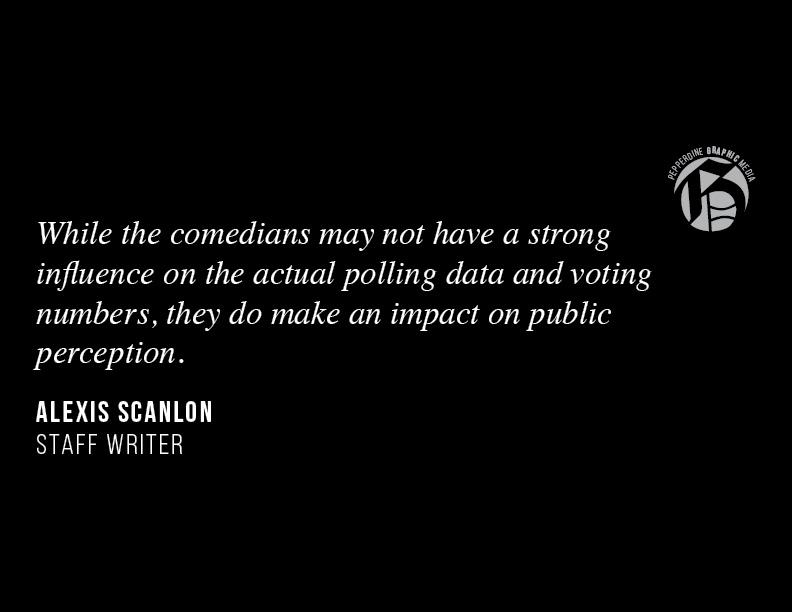 One of the most influential media outlets during a U.S. election cycle is arguably “Saturday Night Live.” The sketch comedy show is known for its political cold opens and its unapologetically liberal agenda. From Tina Fey playing the role of former Republican vice-presidential candidate Sarah Palin to Alec Baldwin’s recurring role as President Donald Trump, SNL actors shape the political sphere.

It can be both heartwarming and crushing to see recurrent characters take on their political acting role week after week. Yet many seem to have found encouragement in dark political times as they look for something to laugh about.

The comedians who take on the weekly role of tough politicians play an important part in bringing happiness to the American people during such a dismal time — even when the sketches are not the most politically reliable source of information.

The past four years have been filled with Baldwin as Trump, Beck Bennett as Vice President Mike Pence, and Kate McKinnon as numerous political figures such as Jeff Sessions, Kellyanne Conway and Robert Mueller.

One of McKinnon’s greatest, and arguably most influential, political roles was that of former Democratic presidential candidate Elizabeth Warren during this year’s presidential election. Warren’s campaign sadly ended during this election cycle on Super Tuesday after the majority of delegates were split between nominees Bernie Sanders and Joe Biden.

The cultural reset of McKinnon hanging up her Warren costume is a stark weekly reminder of the end to Warren’s campaign. How much do these political sketch characters affect the views of Pepperdine students who have grown up watching politics unfold on the “Saturday Night Live” stage?

These comedians have a stronghold on the personas of key political players. Their influence is at its height during an election year. While the comedians may not have a strong influence on the actual polling data and voting numbers, they do make an impact on public perception.

Students attach to the idea of what a candidate represents alongside their actual proposals. Do they practice what they preach? Will they truly get things done? With this hyper-focus on personal character, students will latch on to the public perception of a candidate.

McKinnon presents a strong candidate who is personable and has a detailed plan, much like Warren’s actual persona. Colin Jost portrayed Pete Buttigieg as a weaker candidate with no backbone. Chloe Fineman created a magical perception of Marianne Williamson as a candidate campaigning from the astral plane.

It is easy to become attached to these characters and the laughter they bring into the lives of students faced with a looming election. It is hard to watch them go because the candidates they represent have met their campaigning end. “SNL” is such a pivotal piece of American politics because it creates comedy out of something that incites fear.

As students form their political opinions, it is important to take this comedy for what it is: comedy. “Saturday Night Live” brings a lightness to difficult times when the community needs it the most. But if their political bits are taken at face-value, there is a threat of misinformation.

Remember to stay politically engaged and informed during the rest of this election season. There is still time to vote and demand a better future. The fight is not over yet.