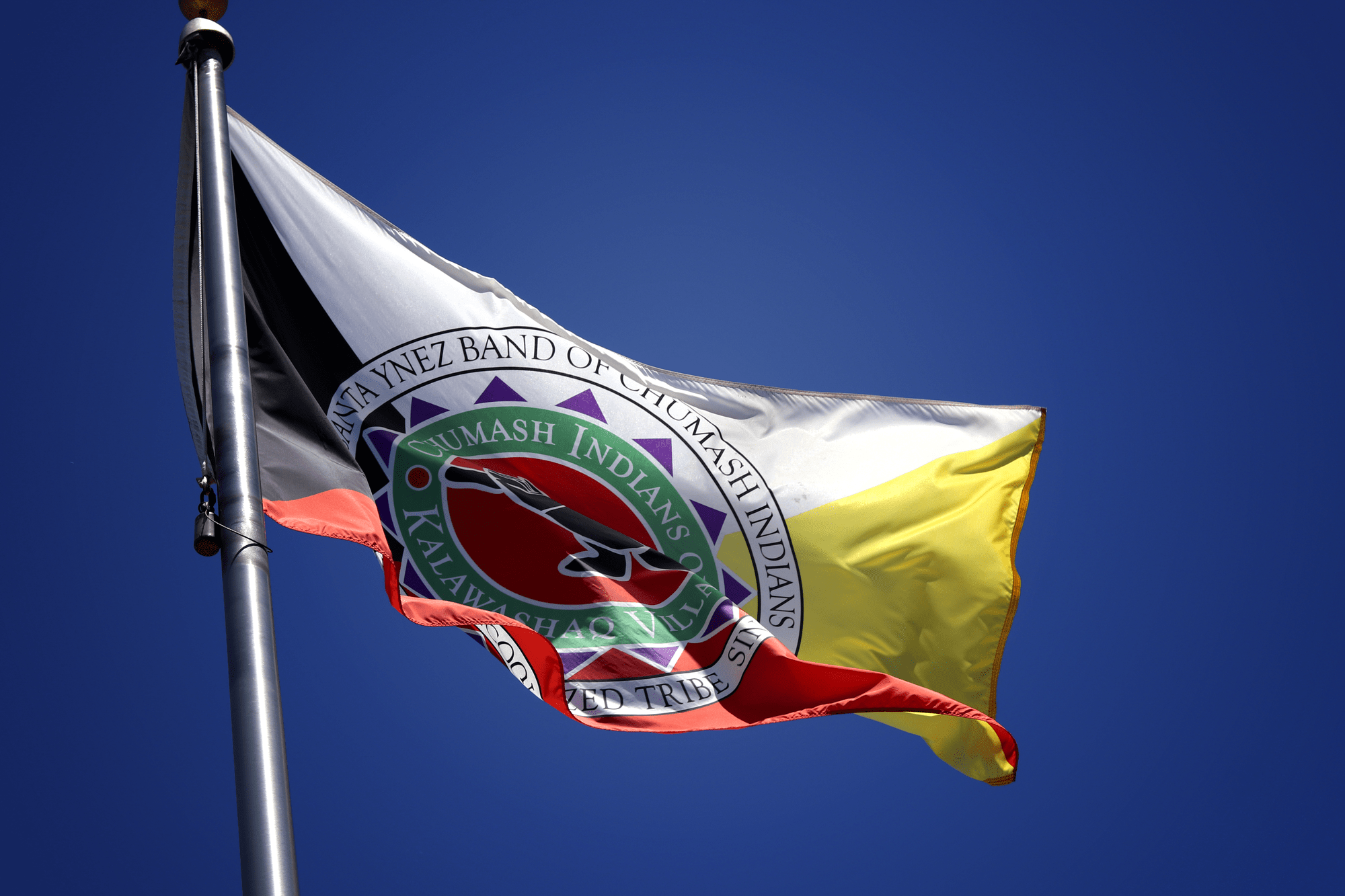 The flag of the Santa Ynez Band of Chumash Indians billows in the wind by the reservation’s tribal administration office April 28. The Samala Chumash reawakened their culture after gaining access to documents about the history and teachings of their ancestors.

The Samala Chumash, the original occupants of Malibu for 4,000 years, gave the city its namesake of “Humaliwo,” or “the surf sounds loudly,” according to malibubeachnews.com. The impacts of colonization — including missionization, secularization and reservationization — forced many Samala Chumash to abandon their culture, including their importance of land stewardship.

Hundreds of years later, Nakia Zavalla, cultural director for the Santa Ynez Band of Samala Chumash Indians, said she aims to “reawaken” the culture and language once stripped from them — including the ancestors’ unity with their people and the land — by implementing traditional, sustainable teachings and behaviors.

“Environmental stewardship is not a new thing for us,” Zavalla said. “We went back and looked at the teachings of the ancestors; it’s all right there.”

By returning to their ancient roots, the Samala Chumash seek to be environmentally conscious in a modern world affected by disastrous waste and climate change, Zavalla said.

The Samala Chumash officially established the Santa Ynez Reservation in 1901, which boasts 250 occupants, according to santaynezchumash.org.

Zavalla’s connection to the native culture dates back to her fifth great-grandmother, Maria Solares, who was an informant for ethnologist John Peabody Harrington. Solares gave vivid descriptions to Harrington about the daily life, traditional stories, history and genealogy of the Samala Chumash before Spanish contact in the 1500s, Zavalla said.

The Samala Chumash did not have access to Harrington’s notes, which were in storage in the Natural History Museum, until 14 years ago. Zavalla said the acquisition of the Samala Chumash history spurred the reservation to start the Cultural Department.

“We are studying more and really understanding our ancestors’ perspective on viewing the world,” Zavalla said. “[Our ancestors] connected and lived off the land as much as possible. It’s important to be stewards of the land and protect when we can.”

In 1998, the reservation established the Santa Ynez Chumash Environmental Office to provide environmental alteration, grow natural resources and promote culture and spirit, according to the SYCEO website. Zavalla said the modern phrase for Native Americans cultivating the land is “traditional ecological knowledge,” but the Samala Chumash ancestors coined this belief.

The cultural and environmental departments collaborate in educating about ecological knowledge of the terrain by planting native species instead of invasive ones, Zavalla said.

The Cultural Department aims to work with outside organizations to survey the land and learn more about the native plant species in the valley, such as The Jack and Laura Dangermond Preserve.

“It’s been a lot of thinking a lot about how to maximize and utilize the land, knowing a lot of it’s all fenced off and private property or government owned, but creating relationships [can] give us access,” Zavalla said.

While on an expedition, Zavalla recalled seeing a gathering area — where the parts of land the Samala Chumash would grow necessary species to their culture, in addition to utilizing the ocean. These areas were used to collect basketry material, food, plants and trees. For example, the Samala Chumash used tar pine pitch to create glue.

“Part of this reawakening is learning about what we made something out of, and then going and finding connections and resources for us to have access to what we need,” Zavalla said. “We’re still bringing back what was taken from us and what has not been practiced, but once we get these practices down, we go searching for these areas that we can gather from.”

Zavalla said the tribal administration office is zero waste, a policy implemented by SYCEO six years ago. When providing educational programming, for instance, the Environmental Department provides easily recyclable or reusable products. In addition, the Cultural Department composts the waste to use for a community garden.

Zavalla said the reservation recycles and works diligently to “help protect the Earth” but wishes the valley made sustainable resources more accessible because the oil recycling center is 25 miles west in Lompoc.

SYCEO sponsors monthly and yearly cleanups of old cars, hazardous waste or old technology with grant funds. The group particularly focuses on the Zanja de Cota Creek, which splits the reservation in two, running north to south. The Environmental Department monitors and tests the water quality of the wetlands at the south end of the reservation. After building the Chumash Casino Resort, reservation leadership decided to invest in a water recycling facility for the sewer water.

Living in the valley, Zavalla said drought is a constant threat to the reservation because the lack of moisture affects its people, plants and animals.

A false assumption Zavalla said she has heard about the Samala Chumash is that they do not care about the land since they built a casino; in reality, the band took efforts to implement systems that combat negative land impacts, such as recycling and regulating waste.

“That’s another misconception — that we don’t have a right to have to live this American dream and have a prosperous community,” Zavalla said. “Maybe people think we should still be living in tiny houses; I have no idea. When it comes to environmental issues, I think sometimes there’s a stereotype that’s put on the people, as if others can tell them what time period they should be living in, how they should be interacting with the land.”

Regardless of ethnicity, Zavalla holds people accountable to responsibly take care of the planet.

“You have to think about the generations that will be here after you and what is it that we’re doing that can change their way of life, can change the animals that roam around us,” Zavalla said. “This is our land; this is our home. Not for the past 30 years, not for the past 80 years or 100 years, but since time immemorial. We were created here; this is the place our ancestors walked.”