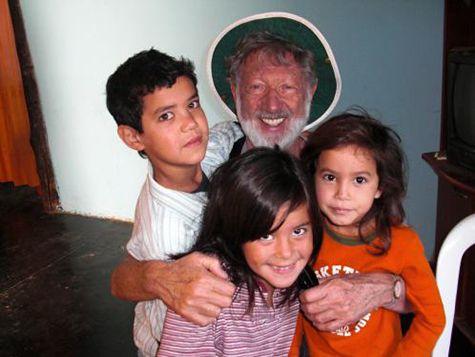 Up to this point, thousands of undergraduate students have funneled through the 11-year-old child brain colloquium of the three people.

Then-professors Cynthia Novak and Lee Ann Carroll and professor Jeff Banks founded the Social Action and Justice program in the fall of 2002.

“We wanted to establish more personal relations with students because the first year seminars were over really quickly,” Carroll said. “The idea was to try to have a program go over two or three or even four years. It would be service learning. It wouldn’t be just a one shot kind of thing.”

Novak left Pepperdine in 2002, and Carroll retired in 2008. Banks remains as the sole founding fixture in the program.

Last week, SAAJ Program Director Banks announced that he is taking a medical leave of absence. He said he plans to be back in the classroom in January 2014.

As a result, his freshman seminar SAAJ class has been split among the three other sections, and English professor Maire Mullins is stepping in to take over his internship class.

The SAAJ program features four semesters, and it knocks off GE requirements of the first-year seminar, English 101, literature and Religion 301.

Banks explained what he wants students to take away from the program:

Banks’ attitude of leaving it up to his students to learn for themselves has resulted in a strong foundation of faculty and has challenged groups of classes. None of the sections shy away from discussing social justice issues of all matters.

“We read the letter to the editor from the Graphic about diversity eroding academic excellence, and we really put each other on the spot about our own racist attitudes and trying to confront that stuff,” Goodman said. “It’s tough, but it’s so rewarding.”

Goodman first arrived to teach at Pepperdine in 1991. Growing up in suburban Tennessee, she felt a culture shock after moving to the Malibu area that rocked her to her core.

“There had been homeless people around where I lived but not that visible,” Goodman said. “Here I was for the first time in my life seeing incredible, extravagant wealth right up against destitution — total absolute poverty. The juxtaposition that you see between the high and the low in Los Angeles, I just never experienced that before. It just kind of shook me up. I wanted to find out more about it.”

From then on, Goodman immersed herself in social activism. She said she team-taught one of the “pilot programs” for SAAJ, combining English 101 with a freshman seminar class, while focusing on civility and justice. These ardent professors with storied backgrounds pour their knowledge into the minds of students. Aleman said that professors, especially Dr. Banks, are passionate.

In her final semester of SAAJ, Aleman has chosen to intern at a Malibu-based nonprofit called RainCatcher that works to provide potable water for children in Africa and India. Later in life, Aleman said she hopes to found her own nonprofit organization. Aleman compared her real-world SAAJ experiences to that of  “gold.”

“You start out with one view of the world, and you go and that view is changed,” Aleman said. “Most of us are pretty ignorant at the beginning, but once we start talking about issues, getting the nitty gritty out there, we become not afraid to talk about it. And it’s awesome.”

Another student, senior Sarah Sanchez, interned through the program. She landed a summer placement abroad in London with Amicus, where she “assisted lawyers in casework and research for justice for Americans on death row.” Goodman praises the uplifting ambitions of SAAJ students.

“It was really heartening for me that the next generation, the generation following me, is interested in embracing those issues of ethics and justice and do want to make a difference,” Goodman said. “It gave me hope. It made me feel like I wasn’t alone anymore.”

Banks supported the notion that the SAAJ courses attain a unique give-and-take relationship between the professor and the student:

“I enjoy seeing the students do acts that help people in the world. I learn from them; it’s not only me teaching them. Many of them come from strong backgrounds of social justice. I’m older, but we have different experiences that we share.”

Well wishes go out to Banks during his medical leave of absence. “Dr. Banks is in our prayers,” Mullins said.

Carroll said she has no doubt he’ll return soon: “He is such a worker. I don’t think he’ll ever retire.”

I am taking a medical leave of absence and plan to be back in the classroom in January.

Here’s what I want to say to the SAAJ students, both past and present:

I am so proud of you. There must be about a thousand of you now who have gone through the four semester program, a program that you CHOSE to take. This is not required … nor should it be. It is a program for those of any major who decide to make a commitment to service — whether that be an hour a week or a day a year or a career in service. But you have made that commitment. What could be more in line with Pepperdine’s mission statement?

Over the years, I have heard from former SAAJers who are now working in Africa, India and South America. I have also heard from students from all over the United States who have chosen careers in service. I have heard from others in the medical field, law, business, education and many other occupations who have made a commitment to service, although that is not their life’s work. All we ask and expect is some commitment to care for others, and the success of the program is solid evidence of that.

There is an old rabbinical story that both in heaven and in hell there are magnificent banquets of sumptuous food all laid out on tables ready for the eating. But in both heaven and hell no one can bend their elbows. In hell no one can eat as they can’t get the food to their mouths. In heaven everyone feeds everyone else.

I am so very proud of all you SAAJers who have both symbolically and literally chosen to feed others. I have been your professor, but I have also learned and been inspired by you. Thank you for allowing me that privilege.