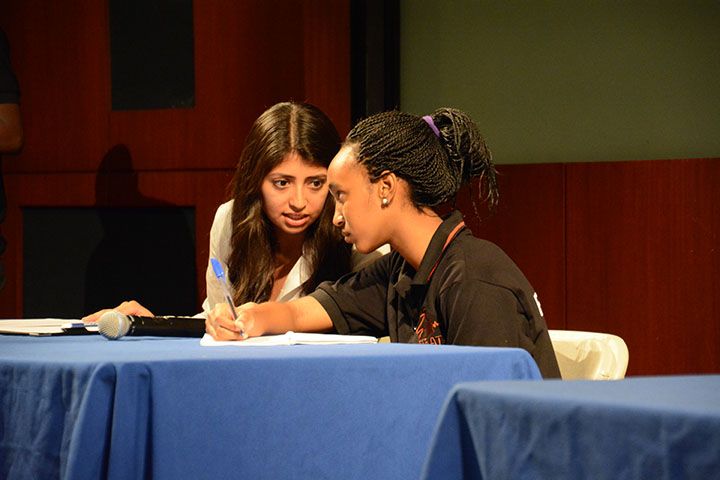 The iDebate Rwanda team was on campus recently as part of their national debate tour.

Pepperdine hosted the debaters from Sept. 15 through 20. The team will visit 17 other colleges and universities within the next two months.

The program has nearly 700 student participants and 22 schools in East Africa, according to the iDebate Rwanda website. The organization hosts many events, from an annual week-long intensive debate camp called “Dreamers Academy,” to an annual debate in which teams from each region compete. Students also participate in public debates within their communities to showcase and practice what they have learned throughout the program.

During an interview in a public relations class, Maya Musenga said the program has empowered her.

“I like speaking out about problems,” Musenga said. “I think we should not be silent about issues.”

“It’s not just a debate program. It gives us a platform. You are pushed to another level and that’s, like, ‘Wow!’” Ekisa said.

According to the iDebate Rwanda website, “iDebate Rwanda gives students the tools to change their own world by teaching them how to think critically, how to solve problems creatively and how to impact their own society.”

Their tour, “Voices from a Post-Genocide Generation,” is taking place all over the country and focuses on spreading awareness of what Rwanda looks like 20 years after the country’s genocide.

“We don’t want people to pity us,” International Coordinator Jean Michel Habineza said. “We want to build relationships, we want people to find a different view about Rwanda.”

Habineza began iDebate Rwanda in 2012 after attending Towson University in Maryland. It was there that he learned to engage in difficult conversations with his friends and saw the benefit of having a platform where people could disagree. He decided to take the skills he learned with him to Rwanda.

Habineza said he believes it is important to teach the future generation skills necessary to attain jobs and deliberate about public policy because in many African nations there is not a clear path to political office like there often is in the United States.

“Think about it,” he said. “People go from fighting in the bush one day to being the president the next.”

When asked what some of the biggest challenges were in advancing the program, the team mentioned their culture. In Rwanda, it is viewed as disrespectful to talk back to an elder. This tradition is prominent in the home and in school settings, according to the team. Musenga said she has been kicked out of her classroom for not agreeing with her teacher and being vocal about it.

“In a culture where there is blind obedience, it is hard to tell people that just because you disagree doesn’t mean you hate them, or that is disrespectful,” Habineza said.

But that will not stop the teenagers from debating, Habineza said. They are passionate about iDebate Rwanda. A boy they once accepted into the program had to sell one of his two goats just to attend the Dreamers Academy, he said.

“That was all he had, two goats,” Habineza said. “And he sold one to come to the camp … [Americans] may think it’s weird, but students are paying to come,” he said.

Ekisa, who works as the program’s communication officer and mentor for the newer members, wiped tears from her face as 17-year-old Clarence Mbabzi told the class about the time her debate team made it to nationals.

“I cried over the phone when [she] told me,” Mbabzi said.

Pepperdine was the first of many stops for the team on their tour of the United States. Habineza said he knows the team will do well and continue to represent their country.

“The most beautiful part was that they felt ‘I have a right to be here. I deserve to be here,’” he said. “No amount of money in this world is better than that moment, nothing.”

Clarification: The first version of this article did not accurately reflect Jean Michel Habineza’s message regarding the political training of African politicians. The article has been edited for context.