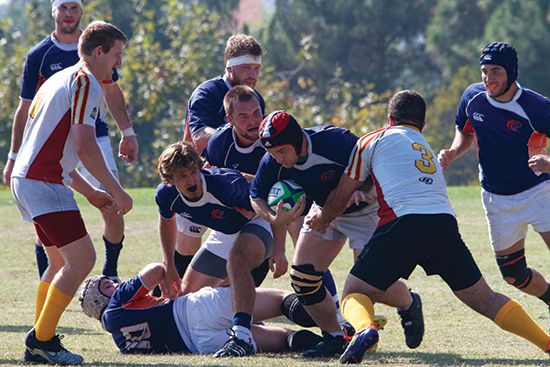 A lazy Pepperdine Sunday often looks like this: a late wake up, which rolls into a trip to church, which pushes the insurmountable month-long homework deadline that creeps up into the twilight hours of tomorrow.

As the students hunker down in the study cubicles of the library, they can gaze out to the green of Alumni Field in the afternoon sun. Two goal posts have been raised, and 36 men can be heard shouting and warming up for a game of aggression and glory. Waves rugby has come out to defend its home turf.

Men’s rugby is a club sport at Pepperdine — and a top-caliber one. After a decisive 27-15 win over USC this past Sunday, the Waves continue their undefeated season, 2-0. The club faced UCSD in its first matchup and annihilated them 52-5.

Club president senior Brad McFarland recapped the victory over USC: “The game went really well, and the team as a whole performed well with very few weaknesses. Last weekend, USC beat our division champions from last year by around 20 points, so our victory shows promise for the team this year.”

The undefeated season lends itself to the depth of the team this year. This is one of the largest club teams rugby has had, with a solid mix of experienced veterans and talented freshmen making up the roster. Most members, including McFarland, picked up the rules of rugby in college, and the team sets high standards of excellence for competition.

“Our team goals are to go undefeated in our season matches and to perform well in playoffs,” McFarland said. “This is a good possibility because our team is really coming together as a family and hasn’t been this unified for a long time.”

This unity is secured with the high level of intensity in the sport. There is also competition within the team, since the depth of the players goes so deep, McFarland said.

What might one find so enticing about rugby and the aggressive nature of the sport? Junior and first year player, Albert Lin admits the more physical the better.

Rugby is a team of gentlemen who have a love for competition and camaraderie. When committing the time to a sport that demands intense levels of relentlessness and contact, a team with the goal of success is easily wrought.

If anyone is interested in joining this brotherhood, rugby conducts rolling tryouts, meaning anyone can attend the regular practice on Wednesdays and Fridays at 3:30 p.m. to see if they have what it takes.

If you prefer to watch the wrestle for victory from the sidelines instead of partaking in the game, the Waves defend their title on Alumni at noon on Sunday, Oct. 27.