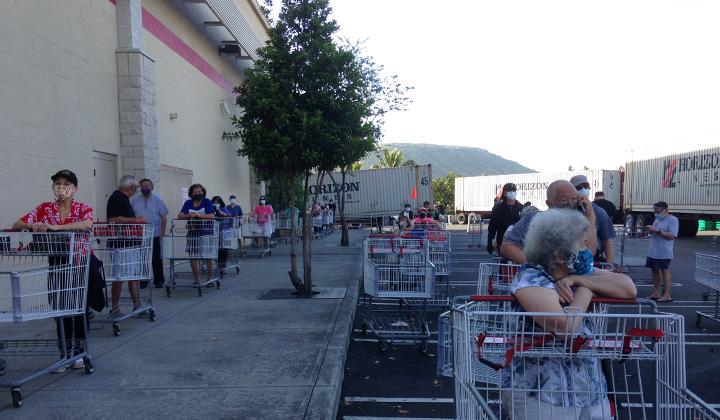 Kūpuna (Hawaiian for elders) wait outside Hawaiʻi Kai’s Costco in the early hours of the morning April 16, waiting for the doors to open at 8 a.m., for those 60 and older. Lines such as these have become commonplace as COVID-19 places strain on access to foodstuffs such as flour, eggs and milk. Photo courtesy of Thomas Carr.

In an otherwise desolate strip mall, a thin trail of people waits outside Costco in the Eastern Honolulu neighborhood of Hawaiʻi Kai, carts in hand. Masked and gloved, the shoppers stand six feet apart from one another hours before the wholesale store opens, hoping to get their hands on a carton of eggs or a rationed bag of sugar.

It’s no anomaly. Across the U.S., the COVID-19 pandemic has upped the demand for select food products, prompting many lines such as this. However, in Hawaiʻi — the most isolated land mass in the world, 2,400 miles away from California, its closest neighbor — the demand is especially troublesome.

On isles that import about 85% of its food, consumers must wait for shipments via air or boat for most of their everyday ingredients. As COVID-19 places pressure on suppliers, the conversation in the Aloha State has shifted to one of food sustainability, finding ways to produce local food for Hawaiian communities to avoid this dependence on overseas shipments.

“We’re very mindful that a pandemic isn’t the only crisis that Hawaiʻi is particularly susceptible to,” said Keith DeMello, director of communications and community at Ulupono Initiative. “There’s hurricanes, tsunamis and what not — things that can instantly interrupt the supply chain among other big impacts.”

DeMello said the islands have grown comfortable after years without major natural disasters or crises disrupting the importation of goods — the most recent catastrophe being Hurricane Iniki in 1992. It is not a matter of whether Hawaiʻi will be affected by another disaster, however, but a matter of how much time the islands have before the storm hits, DeMello said.

“The clock is ticking,” DeMello said. “You’re gambling against what is the inevitable.”

It’s not as easy as waiting for a cargo truck to drive over state lines when disaster strikes or a store runs out of sugar. While it only takes a day for goods to reach Hawaiʻi from East Coast nonstop flights, it can take seven to 10 days for cargo ships to reach the Aloha State, wrote Sharon Hurd, economic development specialist for Hawaiʻi’s Department of Agriculture.

One way the islands can reduce this reliance on imported food is by increasing food sustainability in Hawaiʻi.

“Sustainability is working with everybody, trying to improve on whatever practices they are using in order to keep that food production at its highest and then also focus on food quality,” Ahmad said.

With a resident population of over 1.4 million individuals — and over 9 million visitors a year — Ahmad said Hawaiʻi’s farms wouldn’t be able to sustain the local population without the help of imported goods.

“Where is that balance that you can still try to help the farmers so they can sell locally and make money and stay in business and where you can also keep feeding the entire population in Hawai’i?” Ahmad said.

In total, Hawaiʻi has 1,135,352 acres of farmland, according to the most recent Census of Agriculture in 2017. The 7,328 farms included range from cropland, pasture, woodland and aquaculture. While there are some larger farms, ninety-three percent of Hawaiʻi’s farms are family run and 66% are only between one and nine acres.

Despite the dependence on imported food, Hawaiʻi’s capacity for multiple growing seasons lends itself to increased agricultural production. Many companies rely on Hawaiʻi for testing seed crops such as corn before the mainland’s planting season, making seeds the islands’ top agricultural commodity. The industry has a production value of $120.8 million on the islands, according to the 2017 Census of Agriculture.

In the midst of the COVID-19 pandemic, larger-scale local farms struggle with the effects of the diminished tourism and restaurant industries, Ahmad said. Farms that would send large shipments of produce to these restaurants can no longer depend on the larger orders from eateries.

“We have the low demand from the restaurants because they all closed, mainly,” Ahmad said. “[Farmers] are not harvesting because it’s more costly for them, plus the larger distributors are not available for them to receive their products.”

“No matter what, ag[ricultural] production in Hawaiʻi is expensive,” Ahmad said. “Those restaurants are able to pay more to the local farmers, and that’s helping them because the production cost is high.”

These farms need time to adjust to changes in distribution, which makes the situation even more dire for Hawaiʻi’s agriculture, he added. There are costs associated with this production shift to smaller-scale shipments, and farmers also face the challenge of maintaining physical distancing among staff while harvesting and sustaining crops, forcing them to leave many fields unharvested.

DeMello said Ulupono Initiative has been connecting farmers to nonprofits to find ways to sell produce now that hotels and restaurants have depleted demand.

Ahmad said it is hard to know what long-term effects the pandemic will have on these farms and whether they will be able to adapt quickly enough to address the shifting needs of communities — or if they will have to downsize their production.

When it comes to food sustainability, Ahmad said Hawaiʻi needs to find a middle point between the three P’s of sustainable agriculture: planet, people and profit.

“[It’s] a practice that is supposed to be environmentally friendly, either produce[s] more food or more healthier food for the well-being of the people who are consuming the food … [and is] profitable in order to be adopted and continue,” Ahmad said.

Ahmad added that one of the benefits to local agriculture is that it decreases the chances of introducing illnesses found on the mainland United States to Hawaiʻi, such as COVID-19.

Training the Next Generation of Farmers

For Hawaiʻi to increase agricultural production, the islands need farmers — which is where GoFarm Hawaii comes in.

The farmer training program takes individuals interested in entering the agricultural business and gives them the tools to start up their own agricultural endeavors. Once accepted into the program, sessions range from a four-to-five-day introduction series to a three-year project where students start their own quarter-acre farms, managing the physical and financial undertakings involved.

Beyond the decreased need for imported food, Program Coordinator Nora Rodli wrote in an email that the importance of sustainable food production is the boost it provides to Hawaiʻi’s economy and resiliency, as well as the positive impact it has on community’s sense of purpose and relationship building.

The program has adjusted because of COVID-19, she added, but she has also seen the local farming community step up to the plate.

“What we are seeing is farmers all over the state being creative to adapt and finding ways to connect with consumers,” Rodli wrote. “We are seeing new collaborations between food distribution organizations, chefs, and farmers to create new and safe ways to access food.”

In a way, the pandemic has pushed the islands a little closer toward sustainability, she wrote.

“In general, we are seeing a willingness to collaborate across sectors that is the answer to becoming more self-sustaining,” Rodli wrote. “When this passes over, the challenge will be to continue on with what we are learning now.”

The issue of food sustainability has been on the government’s radar, with Gov. David Ige launching his Sustainable Hawaiʻi Initiative in 2016.

In addition to other environmental goals, the initiative sought to double Hawaiʻi’s agricultural production by 2020. The State of Hawaiʻi’s Office of Planning was unable to be reached to comment on whether the islands have achieved this goal.

One of the steps the initiative laid out is increasing loan availability to farmers, with the Department of Agriculture receiving $5 million annually for this purpose. The initiative also sought to help start up livestock, dairy and egg farms on the islands, as well as increase available agricultural land.

“Consider your purchase of that local food that is a little more expensive your donation,” DeMello said. “We really need it.”

Ahmad mentioned how Community Supported Agriculture (CSA), where community members pay for a membership to a farm in return for produce, is another great way to support food sustainability. It also minimizes the possibility of virus exposure across communities by keeping distribution local.

There is work that needs to be done at the governmental level, he said, to make it easier for farmers to ship their produce inter-island, as most farmland is on sparsely populated Hawaiʻi Island, but the demand is highest on densely inhabited Oʻahu.

That process, however, also comes with the additional costs of USDA screening to prevent pest and disease spreading across islands, he added.

“In any situation, there’s pros and cons,” Ahmad said. “Where is the balance? How can we find it?”

Ahmad said he was inspired by news of mainland restaurants maintaining their orders from local farms and selling extra foodstuffs along with their takeout, and he said he hopes Hawaiʻi eateries follow suit.

DeMello said Ulupono Initiative has distributed over $300,000 in grants to nonprofits, food banks and the Department of Agriculture to fill gaps during the COVID-19 pandemic. Much of it went toward organizations providing food for families and students in need through local produce.

$20,000 alone went to support purchasing feed for pig farmers, who depend on scraps from restaurants — many of which closed because of COVID-19 — to feed their livestock.

“We don’t know how much this pandemic is going to push us back, but hopefully, we are learning from it to do better next time and to improve,” Ahmad said. “All of that will hopefully lead us into a better future.”

Individuals in Hawaiʻi looking to support local agriculture can look up the farmers closest to them here.