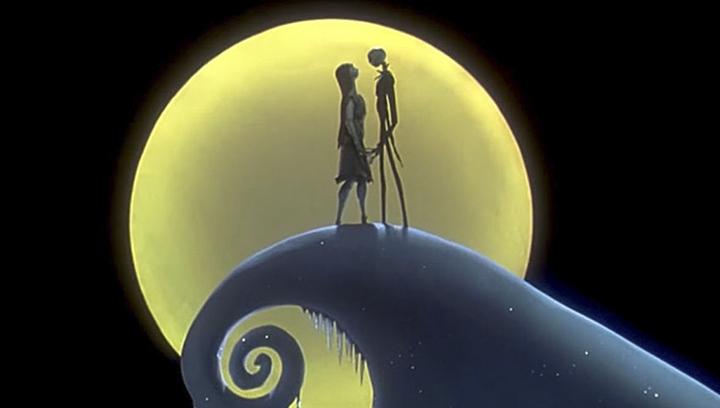 Jack Skellington and Sally sing the iconic finale to the film where they discover they are “simply meant to be.” “The Nightmare Before Christmas” producer Tim Burton is known for his stop motion animation and gothic fantasy.

At the start of the film, Jack Skellington fills the big screen with his melancholy stroll around Halloween Town — one of the seven holiday worlds where he reigns as the pumpkin king — while he sings “Jack’s Lament.” This song conveys his dissatisfaction with the same old routine every year.

Jack’s curiosity leads him to discover a door to Christmas Town, where he finds what he has been looking for — a land of happiness and freshly baked apple pies. Jack now has a new zest for life. He goes on to manifest an idea for his own Christmas. He kidnaps Santa Clause and announces that he will be taking over Christmas, delivering Halloween Town handmade toys to kids around the globe.

Dr. Finkelstein’s creation, Sally, is a humanoid ragdoll and has visions that Jack’s Christmas will be disastrous.

When Jack’s Christmas ends in flames due to gifting scary presents to children, such as flying demons and snakes, he rises from an angel statue at a cemetery with the realization that he must embrace his true self and create Halloween every year.

His burdening need to better himself is diminished as he realizes it is not about the importance of a “holiday:” What matters is what he makes of it.

“The Nightmare Before Christmas” embodies the fantasy of the holidays through its stunning visuals of Christmas lights, Easter bunnies and pumpkins under the glistening full moon.

Danny Elfman‘s original musical score is easily the strongest lyrical score of any Disney movie — even any movie.

Songs like “What’s This?” and “This Is Halloween” showcase the holiday spirit and the dichotomy between the innocence of Christmas and the griminess of Halloween.

Sally feels like an outcast due to her possessive guardian Dr. Finkelstein, who never lets her leave, and her body’s ability to be ripped apart and then sewn back together. Throughout the movie, Sally feels affection for Jack but fails to showcase her feelings to him — something many viewers can relate to.

Jack and Sally fall for one another after he realizes she only wants the best for him. This is after her many attempts to save Jack before he flew away into the Christmas night, with Zero and his bright pumpkin nose leading the way.

When Jack and Sally finally fall in love, they represent the collision of everlasting dreams and hope, making them the greatest love story of all.

Jack and Sally share one of the most iconic sequences at the end of the film when they sing ‘Finale/Reprise” and they realize they are “simply meant to be.”

In the haunting world of “The Nightmare Before Christmas,” the stop motion animation world is built from scratch from the imagination of Tim Burton. The characters have individual personalities like no other film character before because of the literal design of the characters.

The Mayor’s revolving face of worry and smiles represents the two emotions of love and fear in all of us. Oogie Boogie and his crumbling sack of insects represent the hollowness of all evil people in the world.

Sally represents the innocence and hopeful love-struck quality, while Jack represents identity and demand for adventure.

With this film’s symbolism, musical score, character development and holiday visuals, it is universal for Halloween, Christmas or year-round.

Mixing a misfit who only means well and a hopeless romantic in “The Nightmare Before Christmas,” leads to a friend falling for a friend. When they collide amidst the end of a torturous night, what remains is beautiful chaos on the top of Spiral Hill.

“The Nightmare Before Christmas” is available to stream on Disney Plus.