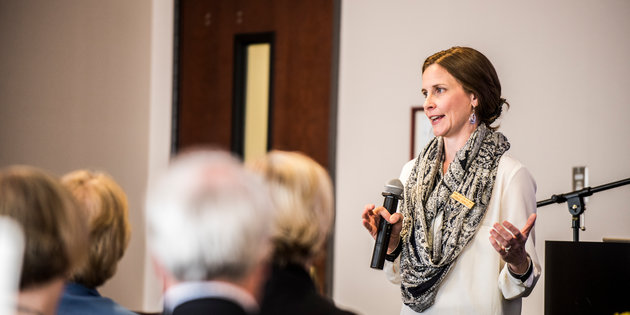 What is a hookup? Director of Relationship IQ for the Boon Center for the Family, Hannah Parmelee, and her Relationship IQ interns have explored this and other similar topics through convocation events held during the school year.

A Seaver alumna who earned a master’s in Marriage and Family Therapy from Fuller Theological Seminary, Parmelee has worked at Pepperdine for 12 years. Over the years that she has worked with young adults, Parmelee said she has repeatedly seen instances of students feeling lonely or unlovable. In a convocation event held on Nov. 2, Parmelee spoke on the relationship between hookup culture and love.

Parmelee said the inspiration for holding the event came from a planning session during which she and her team of Relationship IQ interns were discussing what topics would be relevant for convocation events.

“Each year I get to hire and train Relationship IQ interns, and over the summer I ask them, ‘What do you think our campus needs to hear about? What topic do you think will be relevant and would be important for our student body?’ And hookup culture and how we know that we are in love and how people feel unloved or unloveable were themes that were important to them,” Parmelee said. “I really gravitated to this suggestion because I see that when I work with students. There is a lot of loneliness on our campus.”

Parmelee opened the convocation with the statement “We have been created to love and be loved. We have a desire to be in healthy relationships.” This idea formed the backbone of the convocation and reinforced Parmelee’s assertions that relationships are normal and, under healthy circumstances, a good thing.

During the convocation Parmelee posed the question “What is a hookup?” and asked audience members to raise their hands if they believed that different activities, ranging from kissing to “doing the deed,” could be considered “hookups.” For every option presented, at least one person raised his or her hand, indicating an ambiguity in definition that Parmelee said is likely intentional. Parmelee suggested that by keeping the description of their activities vague, those who have “hooked up” can maintain a sense of safety derived from not having to closely analyze what happened.

Parmelee also addressed the question of why people choose to “hook up.” She attributed the desire for physical contact without the stressors of a formal relationship as one of the motivations for hooking up. According to Parmelee, other common causes of hookups include partying, drinking, sexual arousal, peer pressure, the desire for affirmation and low self-esteem.

Parmelee said she has noticed a trend toward hookup culture as people spend less time interacting face-to-face and more time interacting from behind the barrier of technology. This lack of normal physical contact (hugging, high-fiving, etc.,) then leads people to “binge on intimacy, seeking out contact with others that may not be healthy.” Though people generally recognize that hookups are not adequate substitutions for proper relationships, they may still be drawn to hooking up, as they believe that “something is better than nothing.”

Parmelee said there are risks to hooking up. Risks include ambiguous relationships in which individuals are able to act like couples without the labels of “boyfriend” or “girlfriend.” The intention of this behavior is to make those involved feel safer by not forcing them to formally express their feelings, and thus risk rejection. In actuality, however, this large investment of oneself at the beginning of the relationship actually leads one to be more vulnerable, Parmelee said.

Young adults, particularly those in college, are looking to establish who they are and who they want to be, Parmelee said. Their identities can be influenced by many factors, including relationship status. This can be dangerous, warned Parmelee, as rooting one’s self-identity in a relationship or how a romantic partner views one puts additional pressure on a relationship, increasing the risk of emotional co-dependency and eventually a bad breakup.

Parmelee said she encouraged audience members to instead find their identities in their statuses as beloved children of God. Parmelee said, “God’s love for you is unchanging and consistent. God did not have to create you. He wanted to create you so that he could love you.” According to Parmelee, by forming one’s identity based on the knowledge of God’s unconditional love, one is able to maintain a high self-esteem irrespective of the opinions of others and also reflect that same love to others in a healthy way.

Freshman Joseph Lee said Parmelee’s explanation of the influence of social pressure and emotions on hookups was what resonated most with him. “People see [relationships] as a go-to. If you are not in a relationship, you are not part of the norm.” Lee said that he has noticed how some people emphasize their relationships on social media, causing some who view the posts made by couples and think, ‘Maybe if I hook up with someone, potentially a relationship might start.'”

Junior Margaux Rynties said one thing that she took away from the convocation event was “the fact from the beginning of the convo that said ‘People who engage in hookup culture are more likely to have lowered self-esteem.’ I think it was interesting to see the difference between what hooking up seeks to achieve and what it actually does achieve and how they don’t add up in the end. I feel like it is kind of obvious that if you hook up with some rando that it’s not going to make you happy, or maybe it will for a minute but it’s not what you actually want. It’s a short craving that isn’t really satisfied.’” 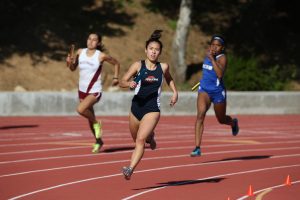