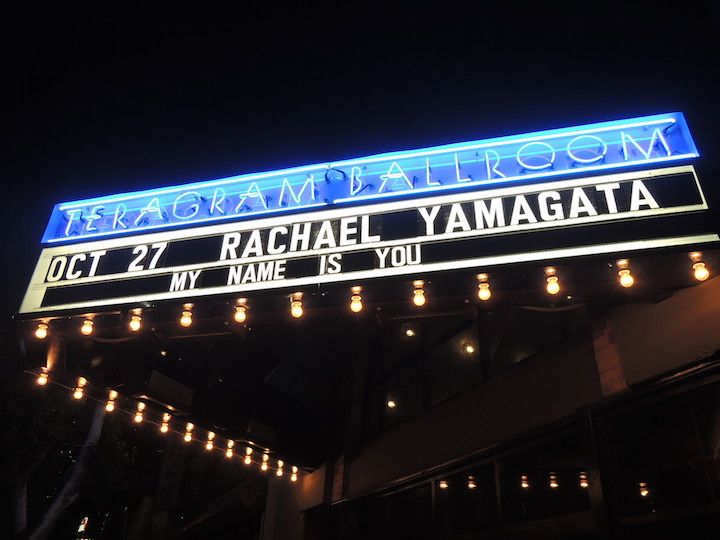 You could hear a pin drop. The crowd was absolutely silent. Even the opinionated heckler whose cringe-inducing, sarcastic voice had plagued us throughout the beginning act kept her mouth shut. Because there before us was a woman dressed in black, alone on the Teragram Ballroom stage, sitting behind a piano with tears in her eyes. Long ebony hair hanging loosely down her back, Rachael Yamagata took a breath — and then took mine.

To be honest, I didn’t come to the show with a very good attitude. I had just battled an hour and a half of traffic to see Yamagata, knowing only that she was super blunt and sang a lot of breakup songs.

I got to the venue on Tuesday when the doors opened and decided to kill some time by asking people why they came to see this artist on a Tuesday night, hoping that my ‘research’ would give me an idea of what I was in for. Turns out this October 27th performance was one of a string of shows Yamagata was playing on her headlining tour promoting her newest album, of which her loyal following is anxiously awaiting. When asked, fans of Yamagata professed to loving her bluesy rock feel and lyrical content, as well as the diverse audience her music draws.

“I heard her song ‘Be Be Your Love’ on a commercial,” a young woman named Chen told me. “And it was so awesome, I immediately was hooked after that.”

She went on to say that last time she saw Yamagata was in New York on Valentines day.

“It was so funny,” she said, “because Rachael sings all these hardcore breakup songs, and then there are these couples slow dancing and coming to see her on Valentine’s Day.”

We laughed as we looked around and saw that the majority of the audience seemed to have a significant other on their arms.

At 9 p.m., the lights went down and a man and a woman came on stage. They introduced themselves as Anne Wilson and Brian Walters, known together as ‘My Name is You.’ For the next half hour, they sang sweet love songs and heartfelt ballads, reminding me of the now defunct Civil Wars as their voices blended together in beautiful harmony.

The night was going well until a heckler who probably had too much to drink decided to make everyone uncomfortable.

“Are you together?” her screechy voice rang out from the back of the room.

Wilson chuckled easily, “No, we’re brother and sister.” She said in her sweetly Scottish accent.

They proceeded with a few more interruptions, but handled themselves with grace, leaving the audience with an upbeat song from their album ‘Fortunate Ones,’ released in 2013.

After the duo ended, leading into a short intermission, the lights dimmed once more and the audience began to cheer as Yamagata and her band walked onto the stage. Following a brief introduction, my ears perked up when they began to play. She was really good.

After a couple of feet stomping songs about jerks who break hearts for fun, she sat down at the piano to play a song when that screeching voice came out of the darkness once more.

“Play ‘Reason Why’!” The heckler screamed, referring to a song from Yamagata’s 2004 “Happenstance” album.

Yamagata looked out into the audience with a slight smile.

“I’m so glad you know that song,” she said. “But here’s the thing, I’m not a playing monkey who will sing whatever you want.” Yamagata chuckled, and I would have slow clapped her if I weren’t holding my camera.

“Instead I’m going to sing a song called ‘Elephants,'” she said.

The crowd cheered as she expertly played the title track off of her 2008 album “Elephants … Teeth Sinking Into Your Heart.”

“If the tiger shall protect her young, then tell me how did you slip by,” her brassy voice quieting to merely a whisper sang. “All my instincts have failed me for once, I must have somehow slept the whole night.”

Her vulnerability had me hanging on every line, entranced by her honesty.

Tears blurred my eyes as they fell from hers. A woman who refused to just put on a happy face restored my faith in a magic that some said was lost with the passing of Woodstock.

After the song ended, the stage was lit up once more as her band joined her to play her hit, “Be Be Your Love.” With a cover of Fleetwood Mac’s “Landslide” and an encore ending, she waved at the cheering crowd before walking back stage.

The audience dispersed, and I left the Teragram Ballroom inspired, feeling that I had just witnessed something that I would not soon forget.