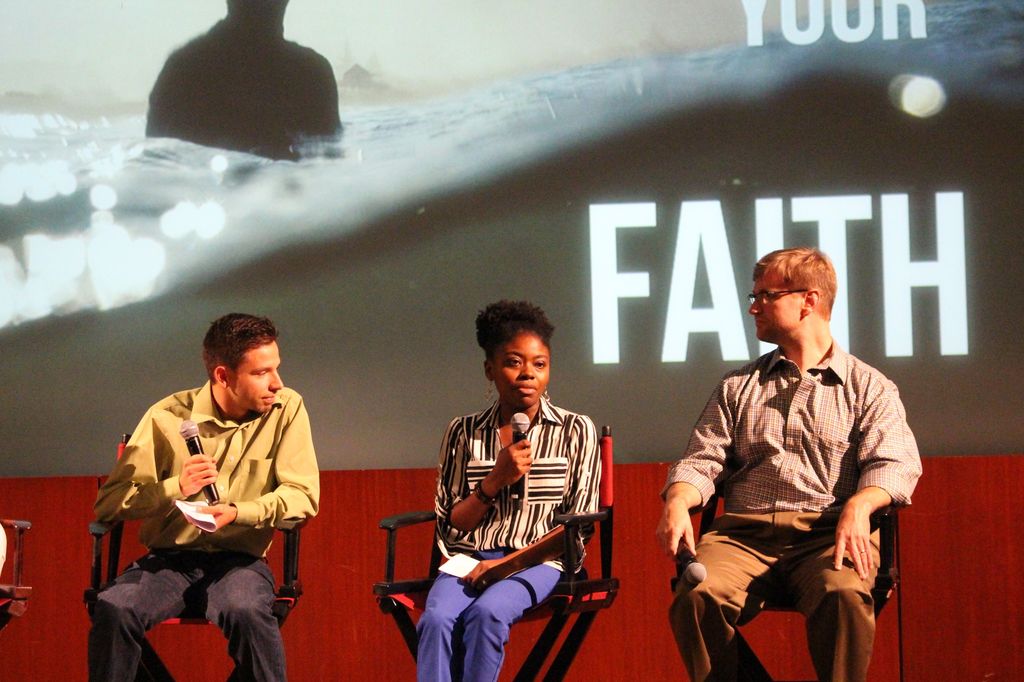 A panel of five Pepperdine professors shared their personal battles in balancing faith and intellect Wednesday night before a full student audience in Elkins Auditorium. Professor Gary Selby, director of the Center for Faith and Learning, led the conversation and said his intent for the discussion was to provide an open platform for discussion about the questions believers and intellectuals often let shake their faith.

When he was introduced to information in college that seemed to challenge his beliefs, Selby said “I felt like the rug was pulled out from under me, and I wondered if I could really trust the Bible.”

Wanting students to understand how important it is to ask those hard questions, Selby began the conversation by asking the panelists about the moments they struggled with believing in Christianity due to seemingly contradictory outside knowledge or new understanding.

Professor Nataria Joseph said she “was caught in this unbreakable dichotomy between research and sacred things that were somehow prohibited from crossing paths.”

“Only when I began to grapple with my pressing questions about faith, could I break through this barrier and come to a place of loving the Lord wholeheartedly,” Joseph said.

Addressing the notion of the “God of the gaps,” Professor Javier Monzon said, “As a young believer, I attributed anything I could not answer through science to God … as I discovered more answers, my God became smaller and smaller.”

“It was ingrained within me that science and faith were mutually exclusive,” Monzon said. “Until I began to understand scientific and theological results as answering the same question from different angles.”

In answering Selby’s second question about finding faith mentors, Professor Kelle Marshall said she was inspired by a conference of Christian teachers she met who all studied in fields outside of theology.

“I had this stigma growing up that if Christians wanted to study something professionally, it had to be theology,” Marshall said. “Meeting experts in their fields who were also strong believers encouraged me to embrace my passion for French and free myself from the idea that I was any less of a Christian for doing so.”

Selby’s final question drew from a quote by C.S. Lewis. According to Lewis “a young Atheist cannot guard his faith too carefully.” He asked the panelists if they thought there was a possibility to come across some piece of empirical data that could destroy their faith.

Professor Stewart Davenport spoke anecdotally of conversations he shared with an intellectual Atheist friend, concluding that “mystery is inevitable.” Davenport said, “there is no way we can ever know everything, and we will never run out of questions — there will always be holes.”

“Seeing God’s divinity in processes like the four chambered heart or evolution has allowed me to unite empirical data and faith,” Davenport said.

Rounding out the conversation, each panelist shared his or her advice in dealing with questions that “rock your faith.”

“There are people here to talk to you about these questions,” Professor Marshall said. “Do not just accept a lack of clarity, but seek out professors and faculty who have things to say about your question.”

Professor Monzon quoted 2 Peter 1:5-8 that advises to, “make every effort to add to your faith.”

“First, do not operate in the dichotomy,” Joseph said. “Second, make sure that you are correct in identifying a question that is truly rocking their faith, not just rocking a cultural layer placed on top of faith.”

Concluding the night, Professor Davenport said, “Be patient and walk around with these questions and problems.”

Sharing her thoughts on the impact of the panel, Pepperdine Junior Brittany Jacobs said, “I think that many times one can struggle with integrating [faith and intellect] as one, and these four individuals showed me how this is possible.”

“I personally struggle with seeing faith and learning as two concepts that can come together,” said Junior Kindra Liang after the discussion, “However, the speakers highlighted the importance of using one’s education to grow in one’s faith and vice versa.”

Students can find related future events hosted by the Center for Faith and Learning on their calendar.