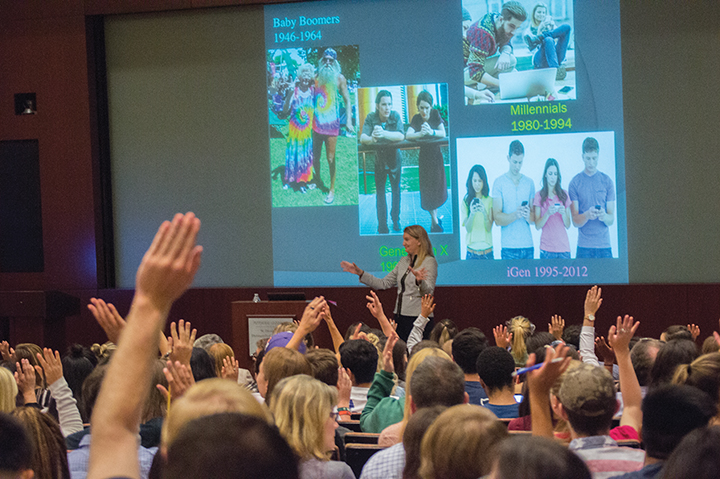 Today’s generation enjoys the privilege of increased inter-connectedness that comes with smartphone usage, though this phenomenon is paired with some distressing statistics. Professor Jean M. Twenge’s discusses some of these statistics in her lecture, “iGen: Understanding the Smartphone Generation,” which took place in Elkins on Oct. 2 and was the first of the W. David Baird Distinguished Lecture Series.

Twenge is a professor of psychology and social scientist at San Diego State University and is the author of more than 140 scientific publications and multiple books, her most recent titled,“iGen: Why Today’s Super-Connected Kids Are Growing Up Less Rebellious, More Tolerant, Less Happy – and Completely Unprepared for Adulthood.”

“Overall time online has doubled since 2007,” Twenge said. “The total time teens spend texting, online and on social media — and this doesn’t involve gaming or watching videos — is six hours a day. Other studies have found this number to be closer to nine hours a day.” 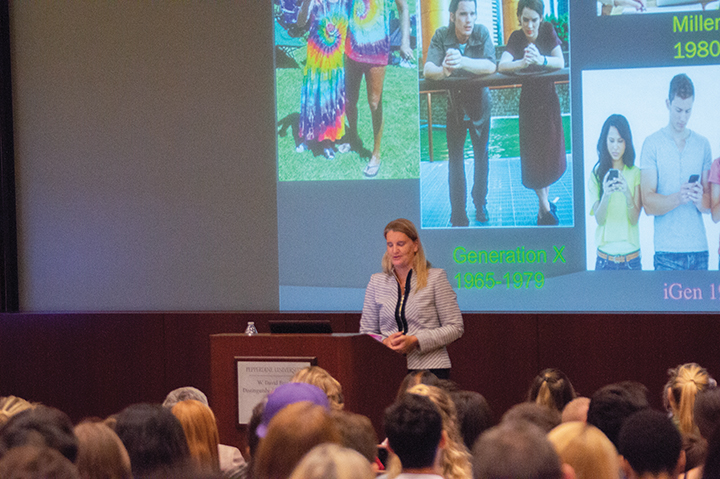 Generational divides today are wider than ever according to Twenge. College students born after 1995 are now considered the iGen, the first generation to spend their adolescence with smartphones. The iGen generation (1995 and up), which follows the Millennial generation (1980 to 1994) and Generation X (1965 to 1979), spends more time online and less time with each other in person, grows up more slowly as adolescents and is more extrinsically and less intrinsically motivated, according to Twenge’s conclusions.

Twenge said depression and unhappiness increased at the same time that smartphone usage became common. Twenge also said the biggest change in the lives of teens occurred between the years 2011 and 2015. These years saw fundamental shifts toward more digital media use, less time sleeping and less time with friends face to face.

Junior Sara Danielsenn said she thinks she will be on her phone less after becoming aware of these statistics.

“I realized how much social media affects my mood,” Danielsenn said. “I want to focus more on my face-to-face relationships rather than getting to know people through text and social media.” 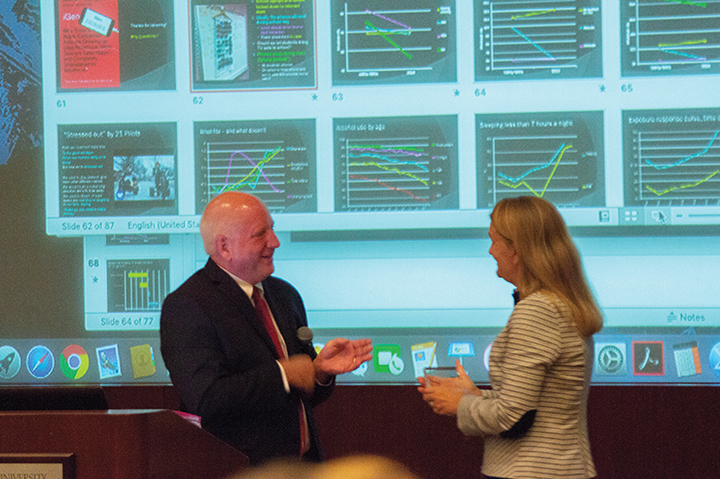 Twenge said more time spent on screens and less time on non-screen activities is hard to directly link to depression and unhappiness, but that there is some evidence to support this statement.

“It is difficult to prove for sure,” Twenge said. “You have to rely on the data you have. With that said, I do think it is very suspicious that teens experienced this spike in depression at the same time that smartphone use spiked.”

The most distressing statistic Twenge found in her research is that the suicide rate for adolescents doubled in the last 10 years.

“I am not suggesting screens and digital use causes most depression because factors like genetics, trauma and abuse factor into this as well,” Twenge said. “But technology use is the most plausible cause of the excess cases of depression after 2011.” 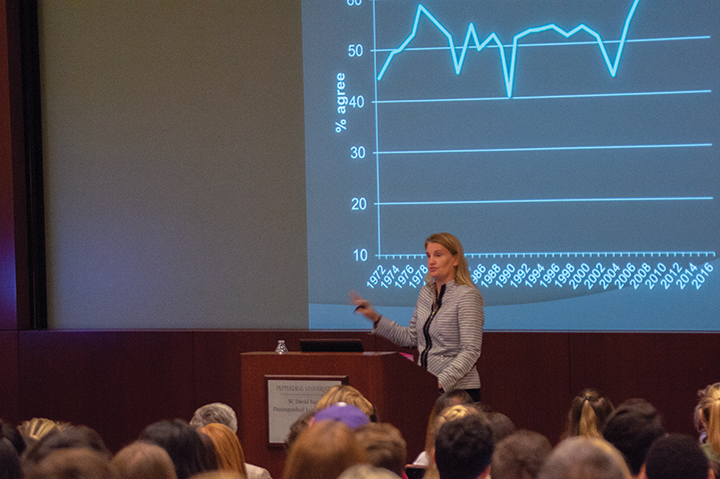 “It’s unhealthy, but I spend about the same amount of time on my phone as she talked about, mostly from checking social media throughout the day or looking things up online,” Battaglia said. “I think what she said about social media causing unhappiness is true, because you see people posting their best moments in life and never documenting their worst.”

Despite the statistics in her research, Twenge pointed out that people are healthier in so many other ways.

“The iGeneration is the safest generation in history, most likely,” Twenge said. “You’re being protected from your own actions such as not having sex at an early age and not getting in accidents as much. Some of these have to do with technology because we can keep in touch, call Triple AAA and apps that track your health.” 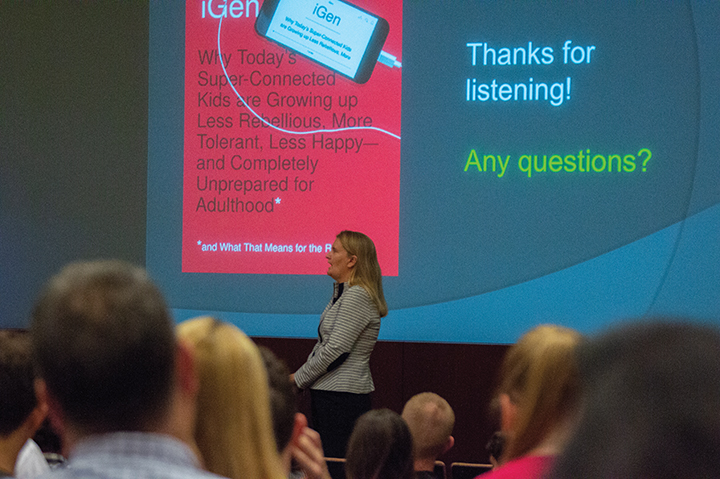 Twenge’s conclusion emphasized the good and bad side of technology. There have been downward trends in amount of sleep and person-to-person communication, accompanied by distressing trends in mental health and happiness. Yet, Twenge said technology was created to connect people.

“About a year ago my husband and I went to a rock concert,” Twenge said. “I was surprised when the lights at the stadium came on and they were all from phones. People used to hold up cigarette lighters. This says something about the moment we live in and how we are shaped by cultural forces. Smartphones literally light our way as in these pictures. We need to have smartphones lighten our way instead of darken it.” 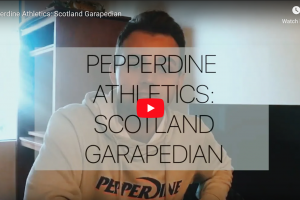 Senior athlete Scotland Garapedian speaks on his responsibilities in the tennis department and how this has influenced his time...
Copyright 2013 Jupiter Premium Magazine Theme
Back to top