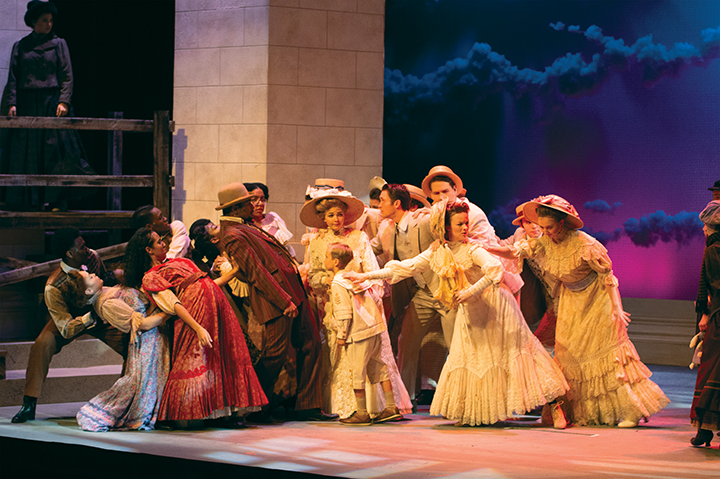 The characters from Harlem and New Rochelle stand off and interact with each other through dance. This photo was taken during the first dress rehearsal.

Pepperdine’s production of “Ragtime” is set to open Friday, Nov. 15 in Smothers Theatre after the work and collaboration of numerous students, faculty and staff.

Set in early 20th century New York, “Ragtime” centers around the journeys of three distinct yet intertwined people all striving to do what is right in the midst of an unjust and harsh society.

Playwright, Terrence McNally, wrote the musical, based on E.L. Doctorow’s 1975 novel “Ragtime,” with the help of composer Stephen Flaherty and lyricist Lynn Ahrens.

The musical made its Broadway debut in 1998 and won a Tony Award for Best Book of a Musical and for Best Original Score.

Kelly Todd, Pepperdine director and choreographer of “Ragtime,” said she was very excited to direct this musical because of its relevance to issues seen today.

“It felt like the most recent headlines were all displayed in this show, even though it was 100 years ago,” Todd said. 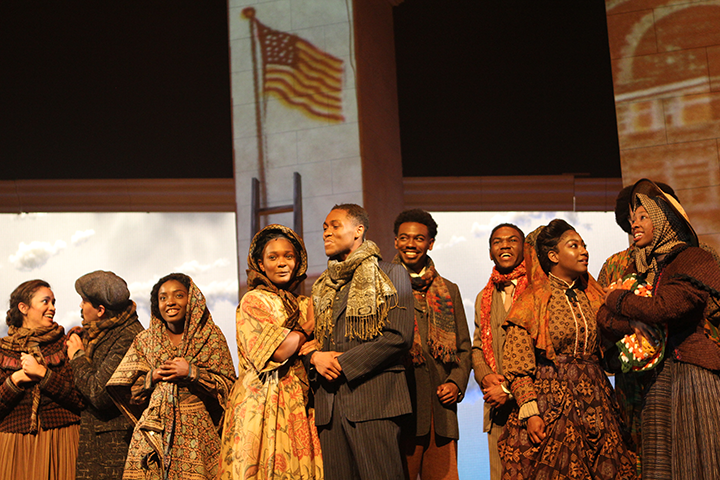 Some of the members of the cast sing as they embrace one another. This photo was taken during the first dress rehearsal.

The Performance and Cast Members

“Every character in the show is profoundly human, I believe, and I think Father is no exception,” Thompson said.

Demaria said she brings her individual strength to the character of Mother, while also showing her deep knowledge of the nuances of “Ragtime.”

“Kelly and I talked about how I don’t have to play [the character] as an older woman,” Demaria said. “I don’t necessarily need to put on this fake, inauthentic maturity that I don’t necessarily have, and [I am able to] embrace my own spunk and my own fire and passion that I bring to Mother.”

Performing with an Eastern European accent, Noah Archibald plays Tateh, an immigrant from Latvia, who struggles to find success for himself and his daughter in America.

Archibald, who plays a father, performs with one of the children in the cast, who is his character’s daughter.

“To dive into a show with that youthful energy right next to you has changed my whole perspective on it,” Archibald said. “And just getting to watch them discover the joy of performing, the same way that I remember doing has been really incredible.”

Preston said he prepared for his role by journaling through the mindset of Coalhouse Walker and by reading the novel “Ragtime.” He said each night of rehearsing and journaling he discovered something different about his character. 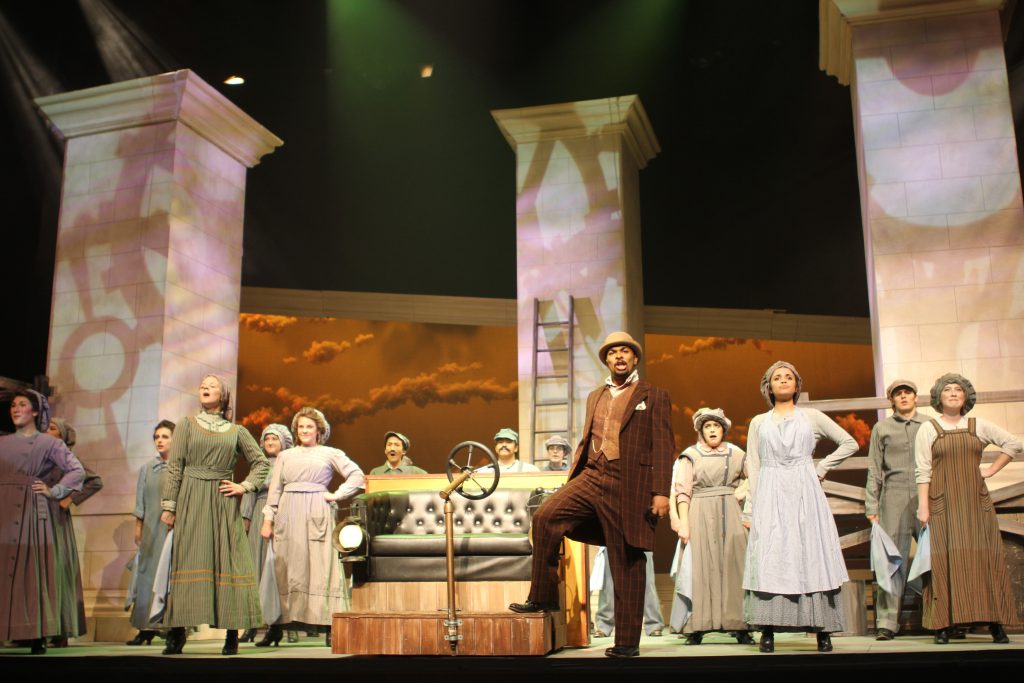 Junior George Preston and other members of the cast sing out to the audience. This photo was taken during the first dress rehearsal.

“I don’t want to go out there and do the same thing each night,” Preston said. “Is [Coalhouse Walker] thinking about revenge right now, or is he just in the moment, or is he confused? I’m trying to figure out the truth each night.”

Dillig plays Sarah, who is a mother, and one way Dillig prepared for her role was by talking with her own mom along with other mothers she is close with. 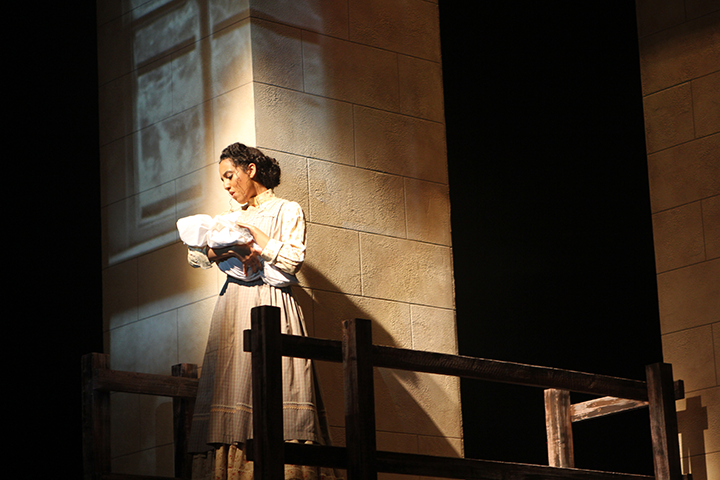 Junior Leyla Dillig sings as her character Sarah to Sarah’s baby. This photo was taken during the first dress rehearsal.

“Talking to all these beautiful women was really inspiring for me and really helped me connect to who Sarah is,” Dillig said.

Drake said the people playing historical figures are not directly carrying the story; rather they are a bit like historical mementos interacting with some of the characters of the show. 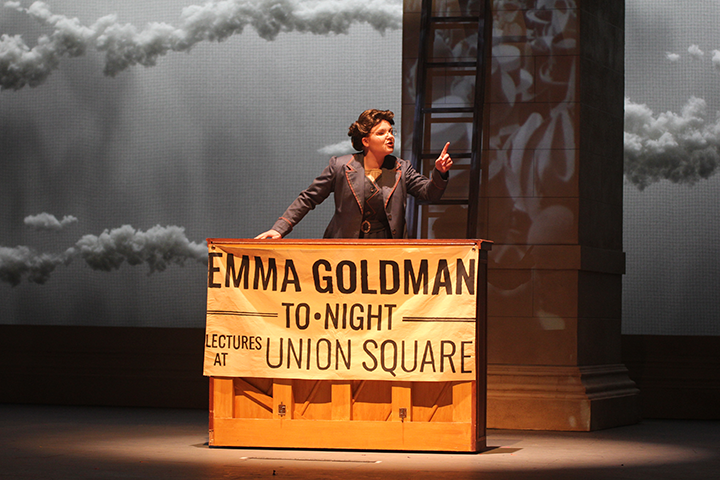 Sophomore Lauren Drake performs as a fictionalized version of historical figure Emma Goldman. This photo was taken during the first dress rehearsal.

There are many other characters who move the story forward in its plot and add more depth to the musical, including Younger Brother, played by Joseph Hebel; Grandfather, played by Brit Hope; Little Girl, played by Maddie Robinson and Elizabeth Muller; and Little Boy, played by Ryan Robinson and Nicholas Board.

Furthermore, the ensemble sang in unison and danced in a variety of different numbers, setting the tone for several scenes. 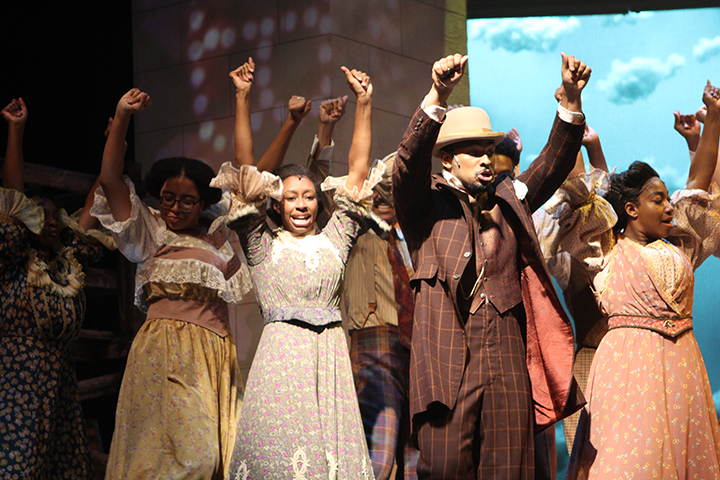 Junior George Preston and other members of the cast dance on the stage. This photo was taken during the first dress rehearsal.

“Everyone in the cast has a moment where you get to just see their heart, and it’s gorgeous,” Drake said.

“The score is phenomenal, and we have an incredibly talented cast that sings just like angels,” Todd said. “Aurally, it’s going to be amazing, and the story is incredibly compelling.” 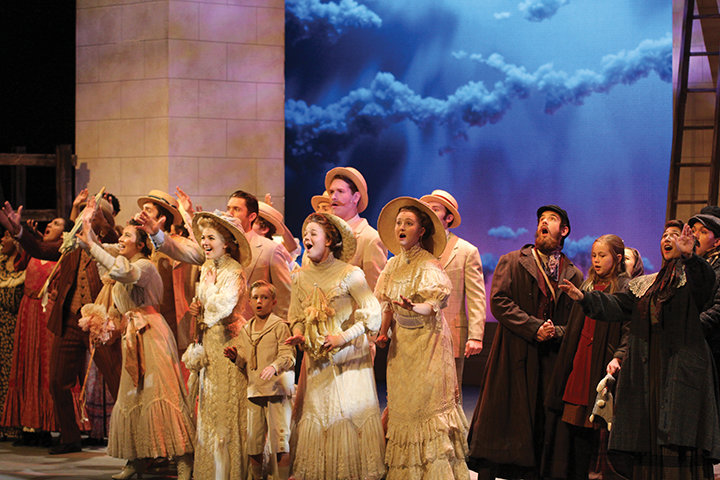 The cast of “Ragtime” sing out to the crowd. This photo was taken during the first dress rehearsal.

The timing and expressive dynamics of the music that Tang and the orchestra produce move the story of each scene.

“The music is incredible,” Drake said. “It is so full and rich and powerful … It feels like it just builds and builds, and it’s like this train and then you just go.”

“Another thing about the music that’s so brilliant is that the storytelling is actually pushed forward through the music” Demaria said. “[The music] is so important to the story that we’re telling, and without the songs, it would not be as powerful and moving as it is.”

Serving as stage manager for the musical, senior Emma Inglehart has numerous responsibilities.

She wrote in an email that she is responsible for the coordination between all the different moving parts, which include the actors, the orchestra and the crew members. She ensures that the show runs smoothly and is also in charge of telling the light and sound board operators exactly when to change cues.

“The audience can look forward to a performance with gorgeous design elements in lighting and costuming especially,” Inglehart wrote.

Inglehart also mentioned that the costumes they rented are from the original Broadway production of “Ragtime.” 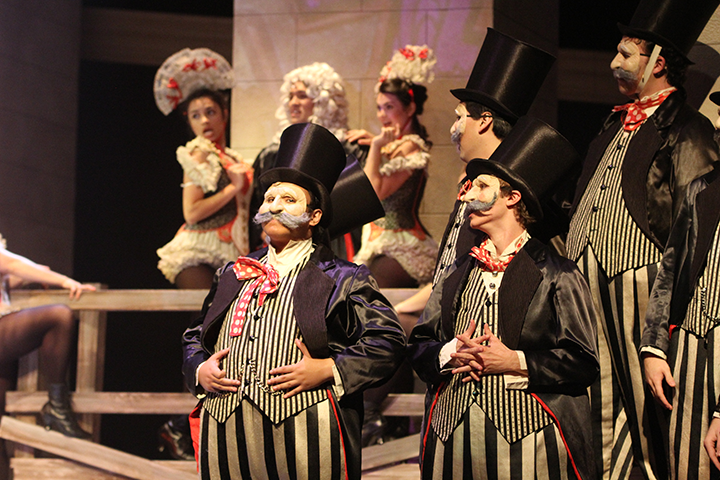 Members of the cast of “Ragtime” wear and perform in the costumes from the original Broadway production. This photo was taken during the first dress rehearsal.

“I’ve worked with [Santiago] before and so had Yelena, our lighting designer, and when we knew we wanted to do video projection, we both thought of him, and [we’re] just so blessed that he was able to work on this project,” Todd said.

Outlook of Cast and Others

The cast and others involved in the production said they believe the story of “Ragtime” is extremely important and relevant, especially for the Pepperdine community. 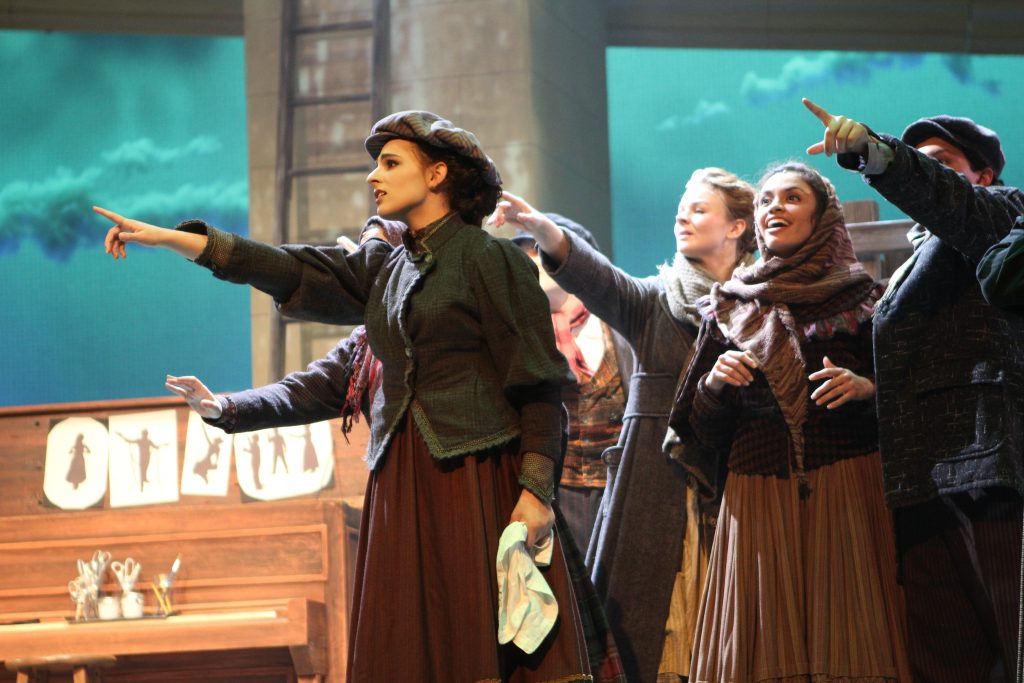 Members of the cast of “Ragtime” point across the Smothers stage. This photo was taken during the first dress rehearsal.

“I think it’s a show that is so ahead of its time when it premiered in 1998 on Broadway,” Preston said. “Reading and seeing that there’s so much depth to each character, it really fired me up and inspired me to work on the musical.”

Demaria said she thought “Ragtime” was also important to the Theatre department at Pepperdine.

“It’s a very important show for the Theatre department because usually we do more uplifting, happy musicals, and this is definitely a more heavy, challenging show,” Demaria said.

Drake said she thinks “Ragtime” is important for the Pepperdine community because it forces people to be uncomfortable.

“I think a lot of times at Pepperdine, we’re full of incredibly nice people that prohibits everyone from having the hard conversations because when you’re having a conversation like this, you can’t be nice; you have to be honest; you have to be vulnerable,” Drake said.

Producing “Ragtime” had a profound impact on the cast and others involved in the making of the musical.

Dillig said she was initially worried the cast would be divided like the characters in the musical are, but she now feels like the cast is very united in its goal to tell this important story.

“I think we’ve actually gotten so close as a cast that I’m really comfortable and really excited to tell the story with these people,” Dillig said. “It’s really great how far we’ve come.”

In order to examine and understand the racial history and tensions that are prevalent in “Ragtime,” Associate Dean of Student Affairs Eric Wilson led forums for the faculty, cast and crew.

“It helps to know what mindset [the characters are] in at the time and what the custom [was],” Thompson said.

Drake said she thought the forums were also helpful to the faculty.

“I think [the forums were] very beneficial for the faculty to connect with the students’ needs and the students realities,” Drake said.

Demaria said the story of “Ragtime” has made her more aware and empathetic.

“I think the story is so important to learn about other people’s stories and realize that there’s so many issues outside of yourself that you need to be aware of,” Demaria said.

Todd said she hopes the musical will inspire people to be more brave in their own lives by seeing the characters’ courage to do what they think they need to do.

“The story of ‘Ragtime’ is a human story,” Demaria said. “It’s a story of humans coming together and learning how to unite together for a common purpose.”

The Pepperdine community and others can see this “human story” in Smothers Theatre, starting Friday, Nov. 15 at 7:30 p.m. until Saturday, Nov. 23. Tickets cost $10 for students and are available online and at the Smothers box office. 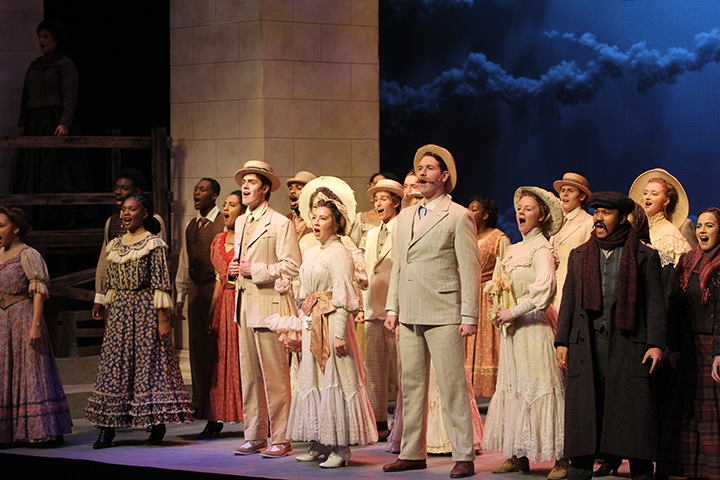 The entire cast of “Ragtime” sing together on the stage. This photo was taken during the first dress rehearsal.