The Presidential Search Committee, alongside the management consulting firm, Korn Ferry, have searched nationwide for several months to narrow the candidate pool down to these five. The search began in March of 2017 after President Andrew K. Benton announced he would be stepping down at the end of the 2018-2019 school year.

“I think it’s an exceptionally strong pool,” Marnie Mitze, vice president and chief of staff for the Benton administration, said. Mitze also serves as the administrative liaison to the Presidential Search Committee.

Student opinions of the finalists varied from indifference to excitement. Others expressed disappointment in the homogeneity of the pool, given that all five are White and four of the five are men.

“I would love a woman president but I don’t know if Pepperdine is ready for that,” junior Dalaney Keeler said.

In regard to the demographics of the pool, a display at the Freedom Wall protests the lack of ethnic and gender diversity. The installation alleges that Pepperdine does not fairly represent the university’s multiethnic community given that every president has been a white man.

“I would like more options,” junior Megan Golden said. “Where the brown boys at?”

Others simply have no preference.

“I don’t care as long as it’s not Trump,” freshman Fiona Quah said. “Is Bernie running?”

Two of the candidates, Marrs and Gash, came from inside the Pepperdine community, but Mitze said that does not necessarily give them an advantage. Perrin is a former faculty member at the Pepperdine School of Law and Sterling is a Pepperdine alumnus.

“In many ways it’s harder to come from the inside than the outside because everybody knows you really well,” Mitze said. “They know your strengths and your [weaknesses].”

This is the first release of possible candidates. The names of eliminated candidates are unknown. Current University President Benton had no control in the process, Mitze said.

“There’s so many moving parts to a decision like this,” Mitze said.

The final forum will take place Friday this week for students to ask the candidates questions, Mitze said. The forum will be in the Surfboard Room starting at 5 p.m. A poll is also available to students to voice their thoughts. 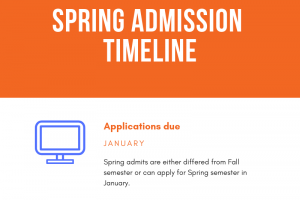 For spring admits, it can be difficult transitioning to a new university in the middle of the school year, but this year's...
Copyright 2013 Jupiter Premium Magazine Theme
Back to top