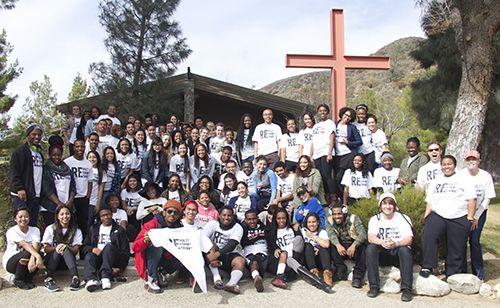 It is not every day that we are afforded the opportunity to voice our opinions. The annual Posse Plus retreat provided this privilege to many Pepperdine students, myself included. Students and faculty members discussed social issues that affect the Pepperdine community, as well as the rest of the world, on a daily basis. This made for an inspirational and motivational weekend.

The weekend of Jan. 24-26 inspired intellectual conversations and activities that provided motivation to reevaluate some very influential decisions that have shaped the past and the present. The topic for the retreat was social movements, and attendees considered and challenged the concepts of revolting, reforming and rethinking.

The retreat took place at The Oaks Christian Camp in Lake Hughes, Calif. It was organized and led by a few core representatives of Posse, along with representatives from the Posse National Headquarters in New York and the Pepperdine retreat coordinator, Carynn McCann. The 34 Posse students at Pepperdine were accompanied by 45 Posse Plus guests, according to McCann.

Many people may have different definitions of what a posse is, based on their own experiences. For the Pepperdine Posse scholars, the meaning of “Posse” is family. It is a support system that is not only exemplified in their actions toward each other, but in their ability to resonate their love, care and respect onto those around them as well. This was evident throughout the retreat as they constantly referred to each other as “family.”

Students who are not Posse scholars were invited to the retreat as Posse Plus. Despite the different labels placed upon the groups, the ambiance throughout the entire retreat was extremely inviting.

“[The Posse scholars] have welcomed me into their family,” said freshman Omari Allen, a Posse Plus guest.

The first Pepperdine Posse group, known as Posse One, consists of seniors who began their time here in the fall of 2010. According to the Posse Foundation website, “Posse identifies public high school students with extraordinary academic and leadership potential who may be overlooked by traditional college selection processes.”

Pepperdine University is one among many institutions of higher education in the United States that partners with the Posse Foundation. The foundation awards 10 outstanding students with full-tuition scholarships for particular schools, providing them with a chance to begin their time at that school with a posse.

For the first time in the University’s history, there is a Posse group in all four classes of Seaver College. The four Posses are made up of students from the D.C. area. Next year, the Posse scholars will come from the L.A. area. This year, the four D.C. Posses enjoyed their time together, as this was the last retreat for Posse One.

“[There were] a lot more people and it was very different,” said Posse One scholar senior Demi McCoy, who has been to all four retreats. “I think it’s reinforced the importance of social movements for me and broadened my awareness of movements that I wasn’t aware of before.”

Posse scholars and Posse Plus guests were very moved by the activities and discussions that made up the retreat.

“Before I left, I said to myself, ‘There’s no way that I can come back to Pepperdine the same,’” Allen said. “It was the best weekend that I’ve had since I’ve been here.”

Most students continued having certain discussions about social issues and movements on breaks. It was impressive to see how many people were willing to voice their opinions and contribute to the conversation.

“All social movements have some precedence and are relevant,” said Posse Three scholar, sophomore Kubarikiwa Rudd. “I think that the fact that we were having those discussions about these problems in the world and in our own country was really powerful for me and really gave me a sense of call to action. [I’m so grateful for] all of the staff and students who came out and were very positive. We all had a lot of respect and love for each other and that, in itself, is a form of fellowship.”

After speaking to various students, both Posse scholars and Posse Plus guests, it was clear that the most popular activities were the Stand activity, the Taps activity and the “No-Talent Talent Show.” The Stand activity consisted of everyone sitting in a circle while possible life events and experiences were read to us by the retreat leaders from the Posse National Headquarters. People would then stand if they had experienced what was read or if they felt a certain way about an issue.

“It really allows you to get a visual of the walks of life that people have,” McCoy said, “but it allows you to look at it both individually and collectively.”

The Taps activity was conducted Sunday morning prior to departing from the camp. Retreat participants were divided into three groups, and two of those groups sat in a circle as the third group walked around the room. People in the two groups sitting down had to close their eyes as people from the third group tapped them when certain prompts applied to them. This allowed an opportunity for participants to show respect and appreciation for each other. Prompts consisted of things such as tapping people who made you laugh, people who changed your life, people who you want to know better, people you found to be extremely courageous and other similar things. The amazing part was that so many prompts applied to the majority of the people in the room.

The “No-Talent Talent Show” was the epitome of the entertainment that occurred throughout the weekend. Performances were given by faculty, staff and students. People were amazed by some people’s unknown talents and amused by others’ priceless renditions of certain songs such as “Somebody to Lean On” and “For the First Time in Forever” from Disney’s “Frozen.” In addition, Posse One scholar Karl Simpson wrote and performed a hip-hop song for his fellow Posse One scholars. There was also plenty of time to unwind and share laughs with everyone at the retreat.

The weekend brought about an array of emotions from everyone there. “This year was unlike most years,” Posse Two scholar junior James Scott-Ransom wrote in an email interview. “It included much stronger, polarizing perspectives and was a larger group than normal. I now have a greater appreciation for my own stance and the courage it takes for people to be passionate about a position.”

In short, the Posse scholars are leaders and culturally aware people who have taken Pepperdine by storm.

“My Posse was the first Posse on Pepperdine’s campus,” McCoy said, “so I really feel like Posse in and of itself has really been a movement on campus. The leadership roles that some of us have taken on have been integral in continuing to promote diversity on campus. I feel proud and, in retrospect, can definitely see where my Posse has helped me to grow and has supported me in my endeavors at Pepperdine.”

With the Posse One scholars graduating in a few months, scholars from the other Posse groups took the opportunity to express their gratitude for the examples they set as the first Posse on the Pepperdine campus.

“I believe Posse One paved and way for all of us,” said Posse Four scholar freshman Kyle Patto. “I love them; they are family. It is very difficult to see Posse One go.”

These scholars have definitely left a legacy on this campus. Some are actively involved with SGA and others are members of the Board. However, all of the Posse scholars have voices that need to be heard. Together, they have had a very positive effect on the University and have motivated many members of the student body.

The family bond this group of people has is wonderfully inspiring. As a freshman Posse Plus guest, I did not know what to expect of the Posse Plus retreat. However, it was one of the best educational experiences I have ever had. I never expected to have the weekend end with so much “Posse love.” 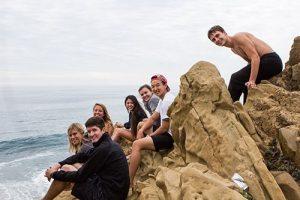 Photo by Ben Keoseyan Campus Recreation took a group of 25 students to Big Sur this past weekend. The students drove...
Copyright 2013 Jupiter Premium Magazine Theme
Back to top