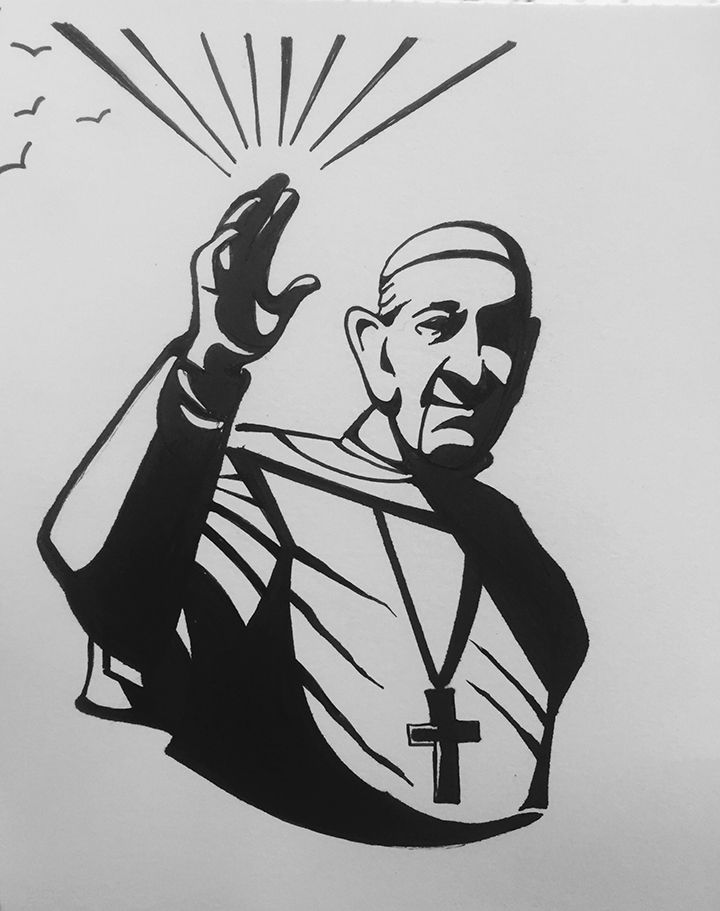 The world’s first South American pope never fails to surprise us. As a Catholic myself, and one who makes up part of the 53 percent of the non-Church of Christ Christians on our campus, I have never been as amazed and proud at how much Pope Francis has moved the Catholic Church forward.

One of the first things that comes to mind when thinking about the Catholic Church is the negative reputation earned through its many mistakes, ranging from countless immoral leaders such as Pope Benedict IX, who gave up his title as pope for a large sum of money, and Pope Leo X, who killed many cardinals, to the numerous deathly historical events such as the killing of hundreds of innocent citizens who were accused of being heretics and not Catholics during the Spanish Inquisition.

However, Pope Francis has managed to change this image and re-brand a once-tainted Catholic Church into what it should have always been: an understanding Church based on God’s teachings, seeking to save souls and mend the broken world in which we live. Through his radical reforms and statements, Pope Francis constantly gears us all, Catholics and non-Catholics alike, to a more substantial life in a better world.

Pope Francis is one of the first main leaders in the Church who desires to drastically eliminate the financial ambition it has been tainted with in the past. Recently, he made the annulment process, the process of divorcing and remarrying through the Church in the future, faster, easier and free of charge, as it used to cost between $200 and $1,000 dollars. This is one major example of his heart to reach out to the poor, to fulfill the needs of all Christians and, what is morally correct. As quoted in the article by Gallagher and Burke on Sep 8, 2015 for CNN, the Pope stated that what is most important is the following: “In the end, the Church’s many laws and institutions must be aimed at one chief purpose… ‘the salvation of souls.’”

In Pope Francis’ visit to the United States last week, we were also able to see the extreme change he has managed to bring about not only the Catholic Church but also our world. One of the major issues addressed was how the Pope was able to help the United States with its broken relationship with the communist country of Cuba. As stated on Dec 17, 2014, in the Time article “How Pope Francis Helped Broker Cuba Deal” he personally issued an appeal letter, which he sent to both presidents, calling on them to resolve cases of imprisoned Cubans and Americans and encouraging them to pursue a closer relationship. As quoted recently on Sept. 23, 2015, in the New York Times article “Pope Francis, in Washington, Addresses Poverty and Climate” by Peter Baker and Michael D. Shear, President Barak Obama thanked the Pope: “You shake our conscience from slumber, you call on us to rejoice in good news and give us confidence that we can come together, in humility and service, and pursue a world that is more loving, more just and more free.”

Similarly, in his first visit to the nation, he shocked the world with his bold remarks on the issue of immigration, a topic that has been widely popular since presidential candidates like Donald Trump have demanded to stop helpful immigration policies. He even mentioned that this issue was important to him, not only because he is from Latin America, but also because his own parents immigrated to Argentina and were given a chance to have a better life. As quoted on Sept 26, 2015, in the CNN article “Pope to Americans: Avoid a ‘superficial quest for unity’” by Daniel Burke, Kristi Ramsay and Catherine E. Shoichet, the Pope told immigrants, “Do not be discouraged by whatever challenges and hardships you face; I ask you not to forget that, like those who came here before you, you bring many gifts to your new nation.”

The final radical step that Pope Francis has been pushing for is climate change. As stated on June 18, 2015, in the CNN article by Daniel Burke called, “Pope Francis: ‘Revolution’ needed to combat climate change,” “While slamming a slew of modern trends — the heedless worship of technology, our addiction to fossil fuels and compulsive consumerism — the Pope said humanity’s ‘reckless’ behavior has pushed the planet to a perilous ‘breaking point.’” The Pope even goes as far as to connect the issue of climate change and modern life with poverty. As stated in Burke’s article, he believes compulsive consuming feeds emptiness of hearts and ignores the plight of the poor.

It amazes me how much this humble and open-minded pope has accomplished since he first took his title as leader of 1.2 billion Catholics in 2013. He has not only become an example to Catholics, but also an example to thousands of Christians from all denominations, people from other religions and atheists who look up to this man with respect.

Catholics, after so many years, can finally stand with our heads high and say, “Yes, I am proud of my Church and all that it is doing to change this broken world in which we live.”