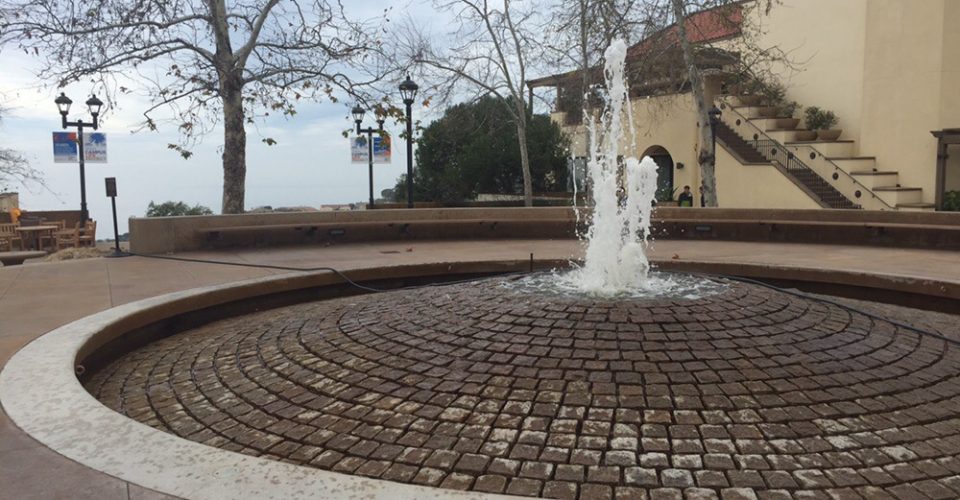 The fountain in Joslyn Plaza is back on, as of Feb. 14, after being shut off for the past three years.

Pepperdine shut down all 12 recirculating water features and fountains in 2014 to conserve water in an effort against the drought. Since then, the fountains at Heroes Garden, and now Joslyn Plaza, have been turned back on.

“I am incredibly excited to see not only that the Joslyn Plaza fountain is turned back on, but that the university is listening to its community in matters big and small,” Lozano said. “I also believe in the importance of water conservation efforts even as we emerge from a drought so I am grateful that the university has found a way to run the fountain while using less water than it had in the past.”

Emily Mead, coordinator for the Center for Sustainability, gave some insight into water conservation at Pepperdine.

“Water conservation should not be viewed as a short-term drought response but instead a necessary adaptation to our new normal in California,” Mead said. “As the drought lessens in severity, however, we are assessing measures undertaken in response to the drought to determine which measures we will retain long-term.”

The 10 remaining fountains are being considered on a case-by-case basis to determine whether they will turn them back on, according to the Center for Sustainability.

While the petition was not published online until Feb. 7, Lozano had been in contact with the Student Government Association since the end of January.

“I thought that it would be beneficial for administrators, who may have been on the fence about the issue, to have more tangible evidence that students really would like the fountain turned on,” Lozano said.

Freshman Jay Ogle shared his thoughts on the fountain.

“I think that the fountain really adds to the overall beauty of the main campus and it’s a real mood booster and moral booster and really brings the place together,” Ogle said. “Without it, it’s just kind of an empty hole and I had never experienced the fountain before so it’s a really nice change to see.”

“I really like having the fountain on, but the drought isn’t over,” Waibel said “The fountains were shut off as a statement for the environment and I feel like administration is giving up early instead of following through with it.”

“I think it’s kind of funny because they only turned it on to about a third of the power that it should be for that size of a fountain so it looks kind of off,” senior Emily Woods said.

“My intentions were to bring back a central icon to our campus and engage students with the opportunity to express what they wanted for our campus,” Lozano said. “It was about the student voice being heard, no matter how small the matter may seem.” 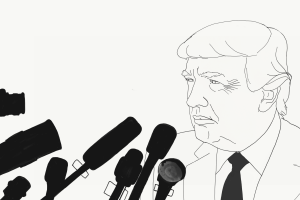 Art by Sybil ZhangPresident Donald Trump began his presidency by starting a war over crowd size with the media. He claimed...
Copyright 2013 Jupiter Premium Magazine Theme
Back to top