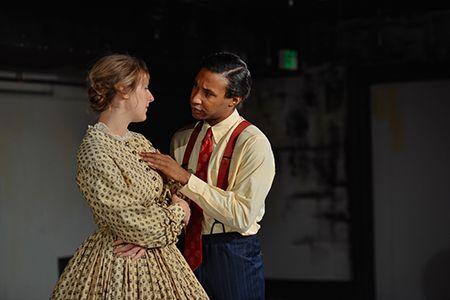 Ever imagined a romance between Emily Dickinson and Nat King Cole? If you haven’t, 2006 alumna Julie Taiwo Oni has and has written and co-produced a play called “nat & EM” that tells an imagined love story between the two.

This one-act black box style play explores an interracial love story in an unconventional yet powerfully moving manner. The play has just three characters — Nat King Cole, Emily Dickinson and a transcriber. The only dialogue that Cole uses comes from the lyrics of his song “Mona Lisa,” and the only dialogue that Dickinson uses comes from her poem “Narrow Fallow in the Grass.”

Actors Christopher Hampton (Nat), Emma Green (Em), and Melissa Donaher (Scribe), master the stage and convey a story of love against time and the world. Hampton delivered soulful vocals, which sounded eerily like Cole himself. Green played the innocent Dickinson, skillfully pouring the emotion of the moment through her lines and movements. Donaher developed her character throughout the play, masterfully bringing the audience into the story. The chemistry of all the actors was evident through their interaction together.

Oni, who is the daughter of a Nigerian father and German-American mother, also has a twin sister, 2006 alumna Jessica Ngo, who is an English professor at Pepperdine.

“The first time I saw ‘nat & EM,’ there were some unanswered questions, but with this production, everything comes together so well. I think she has started thinking a lot more about the needs and wants of the audience, which all of the best writers always do,” Ngo wrote in an email.

This play is well worth the travel to Downtown Los Angeles. It shows at the intimate Company of Angels at the Alexandria located at 501 S. Spring St., 3rd Floor. Performances will go through Nov. 24 and only happen Friday and Saturday at 8 p.m. and Sunday at 7 p.m. Julie Taiwo Oni sat down with the Graphic  at Malibu Yo to discuss her play “nat & EM.”

What was your motivation in developing the plot of this play based on the experiences that you might have had at Pepperdine or elsewhere?

There’s a lot of Pepperdine in that play (laugh). One line in particular that I took really thinking of Pepperdine is the line where, one of the monologues, she talks about the segregated cafeteria. I wasn’t sure if it still was like that. I graduated in 2006. To build up the drama in the play it seems a little bit more dramatic, but I definitely am inspired by situations that I’ve had just since I’ve been in L.A. as a lot of the ideas that I’ve come to have about race have come from the dramatic or very significant difference between being here and being in my hometown Bakersfield … For anybody coming to college or coming to a new city, you have that kind of same situation, so I feel like hopefully that’s something that people can understand from the play even if they’re not mixed race is the idea of feeling like where do I fit in in society?

How did you choose the characters for your play?

Suzan-Lori Parks is one of my idols, and she plays so much with language. I just decided I need to try something crazy with language like she does. I don’t even know how it came to me, but I should have a play where all their language comes from a particular piece of literature. Somewhere along the way I just thought OK one of these people just has to be Nat King Cole. He’s one my dad’s favorite singers. I grew up listening to him, and his image is just so interesting, and I would love to see him on stage. So I thought of that, and I remember I called my dad and I was like dad I’m doing a play that is going to have Nat King Cole. Which song of his should I focus on? He was like oh of course “Mona Lisa.” And so I just went with it. And I actually don’t remember how I chose Emily Dickinson. With Dickinson, I have a musician now. I want to choose a poet, but I couldn’t figure out exactly who I wanted. I was just reading through different poets that I was interested in at the time. I came across her poetry, and it just felt right because there’s just something so unique about her. She’s so eccentric and just so odd and just so unusual. What we know about her isolation throughout her life. I’m just so fascinated — I always remember hearing the description that she was alive during the time of the Civil War and she wrote about the grass and flowers and bees and flies and she wasn’t writing about the political situation that was happening at that time or the social situation.  I’m just interested in the isolation that she represents and how her kind of innocence is so unique and so beautiful.

How would you define yourself as a playwright?

People say my plays are complex, but I think they’re very simple — it’s a love story. That’s it. I like to base my stories on a simple plot with detailed characterization. I like to be able to focus on the characters so that we know very well in detail, through the style of their language and through their movements. We can understand them without needing to have a story that’s too complex.

I tend to deal with themes like cultural miscommunications — has to do with my background ­— I like putting two people together who seem like they could never understand each other and then finding a way to make that happen.

Subconsciously, I feel like I’m always doing that kind of story. It’s probably just my idea that it doesn’t matter if the person looks different from you or is from somewhere else, we all have something in common. That’s kind of the goal for me.

I like to make the audience feel like they are a part of the story that’s happening. So that’s why I put in those monologues. Even though it’s kind of isolating to see nat & EM and the way that they talk I like having the scribe that kind of brings you in and actually talked to you and says okay this is what’s going on.

Why is it important for Pepperdine students to come and see your play and hear the message that your play is conveying?

Part of the message that I’m trying to show in the play is that I feel there isn’t a lot of conversation anymore about being mixed just because it is everywhere. And I know just from being at Pepperdine that there are a lot of people who are mixed. I know that it’s something that a lot of people are like “oh yeah it’s not that big of a deal,” but when I think back to my parents, I think that a lot of people have forgotten about the struggle with the beginning of that. When they got married in the mid-70s, it was really not something that was done.

So many people are a mixture of so many things and it’s something that’s important to celebrate and say this is the beginning of how that was. Look at how beautiful and how interesting this is.

We’ve really been trying to target a lot of students because I want them to be aware of what things were like previously and also just have conversations about what does that mean. It’s important to talk about identity, which is another thing that during my time at Pepperdine I was afraid to discuss. So I’m hoping this will open up and inspire conversations about what is my background and why is that significant and how does that influence the person that I am now or the person that I want to be. I think that college is a time where you’re trying to understand your identity so I think that it’s an important moment to experience a story that really forces you to think about “how does my identity and my racial connection and my background influence what’s happening with me right now?” 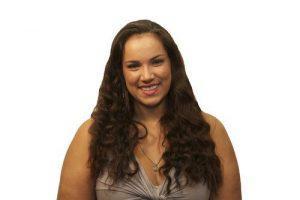 According to the New York Post, a new law protecting underage models was signed on Monday night by New York Governor Andrew...
Copyright 2018 Pepperdine Graphic
Back to top