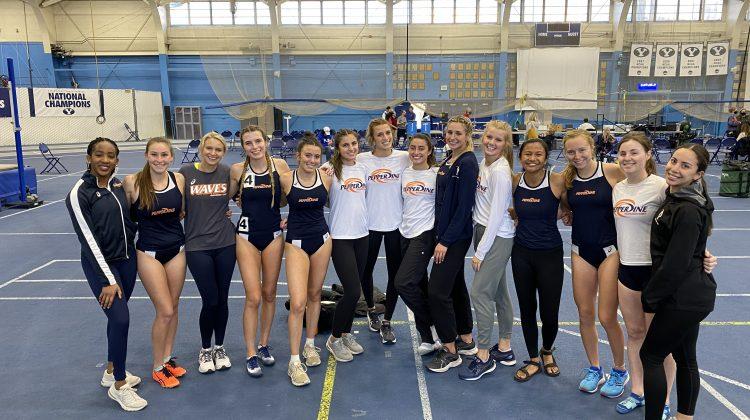 The Athletes competing for the Pepperdine Women’s Track pose at the BYU Indoor Invite on Jan. 15. The Invite was the Women’s Team’s first race of the 2022 track season, the Men’s team will run their first race at the Rossi Relays Feb. 26. Photo courtesy of Pepperdine Athletics

Pepperdine’s Men’s and Women’s Track teams are back on the Stotsenberg Track and gearing up for an exciting season. The Women’s team began their indoor season at the BYU Indoor Invite on Jan. 15, and the Men’s team will kick off the outdoor season at the Rossi Relays on Feb. 26.

After this past season, which included the termination of the previous head coach and COVID-19-induced uncertainty, track athletes said they look forward to running consistent PRs and championing a sense of community.

“I think just individuals running their best is what’s really exciting,” said Lauren Floris, head coach for Cross Country and Track. “Hopefully, we can get as many people on the team as possible to run their best times they’ve ever, ever, ever run, which I think is pretty doable considering so many people are coming off of one or two years of kind of interesting or different or interrupted track seasons.”

Floris said, due to COVID-19, the team has yet to host a full practice, resulting in flexibility with managing individual workouts.

“We had our first practice last Friday and our first race on Saturday, like boom, boom, right at one right after another,” Floris said. “And so with that, you know, there’s like a lot of room to grow from where we are right now, which gets us excited.”

Senior sprinter Tiffany Egbo said the team has taken it day-by-day and is building up to meets later in the season.

“We have a lot of growth to do,” Egbo said. “We have so much talent on our team, but I think just it’s the first meet of the year so obviously, nerves are high. But it was super exciting to see and just thinking it was a good start.”

Egbo said the team has a lot of fresh faces, and she is hopeful the newer runners hit their desired times, and that the team functions as a support system.

“I just want to finish strong and be a good role model for all the new freshmen girls,” Egbo said.

Freshmen distance runners, such as Megan LaCamera, placed at the top of women’s races during the Cross Country season. Floris said she sees potential for the freshmen to both win their heats and achieve top 20 times for the University in track season.

“It’s been really special to have freshmen come in who are making an impact on the team, both in practices and in cross country and I think track will be a really fun place for them to shine,” Floris said.

Junior distance runner and team captain Skyler Danley primarily runs the 5k and said she is excited for the larger range of travel this season. Due to COVID-19 regulations, the team could not travel far for meets, and Danley said she looks forward to the increased competition.

“I think my takeaway was more like I love the coach that we have right now,” Danley said. “The freshmen girls who came onto the team are absolutely incredible and I adore them as human beings and as runners. So I think it was just like learning to work with them and be that team. We didn’t do amazing, but we did way better at regionals than we ever have before.”

Senior hurdler Alexa Ortega said the differences going into this season include being together for practices and a more regulated schedule. Last season, Ortega said she struggled to maintain motivation.

“It was really hard to keep being motivated when there wasn’t a lot of us and every meet we went to, it was literally just track athletes by ourselves racing each other,” Ortega said. “But this season, motivation levels have been up and we’re back doing what we normally do just like other years, pre-COVID.”

During indoor, Ortega said her event, the 400-meter hurdles, does not exist, due to a shorter 200-meter track. As a result, she runs a variety of events and focuses on competing against herself.

“That just teaches me to be adaptable and put my best foot forward in whatever event I get thrown into, even if it’s not like what I love doing or my normal event,” Ortega said.

During outdoor, Danley said she wants a PR in the 5k, and looks forward to running the steeplechase, an event she hasn’t run since high school. As for the team, Danley hopes the team progresses in their individual events, but also builds a deeper sense of community.

“Cross can get kind of competitive because you want to run faster than someone else on the team,” Danley said. “But like with track, it’s kind of nice because everyone has different events you can actually truly like learn to root for each other and like want everyone to do as good as possible because it doesn’t feel like it’s like stepping or encroaching on you in any way.”

A high point of last season, Ortega said, was community.

“It wasn’t like, necessarily my best season or a season that I look back on athletically being like, oh my god, I peaked like I didn’t,” Ortega said. “But I really valued being able to be together with my teammates and having community when that was something that was really hard to find during lockdown.”

Men’s Track Focuses on the Future

Sophomore distance runner Johnathan Flint said one of the main differences going into this season is that the schedule is more fixed and athletes with a booster shot have a shorter quarantine period.

“In general, you’re not going to see yourself losing a ton of training just by general procedures and stuff, and so there’s a lot more certainty there and a lot more ability to train and prepare for meets that you really want to perform in,” Flint said.

“Just knowing that I’m not going to have my season cut short or anything like that, I’m able to train accordingly,” Flint said. “And our coaches are able to train us accordingly with the certainty of when we’ll be ready and when they want us to perform our very best.”

To achieve his goals, Flint said he is focusing on inputs such as nutrition, eating and sleeping, alongside achieving consistent mileage and workouts that complement his races.

“Last year, I ended up running a lot of 1500s because I felt like I had a bad base,” Flint said. “And this track season, I’d like to build up my base a lot more to make sure that I can have some ground to compete in the 5k and 10k which are going to be more flagship events this spring.”

Flint said doing well during the track season inspires the distance team to join together over the summer. Having a good summer training regime provides a necessary base for the upcoming Cross Country season.

“The biggest thing is the season I would like to see is our team have a lot of accountability for one another,” Flint said. “Because even though right now it’s more individual, when you get to cross country, we’re going to be more of a team. And so I’d like to start getting in the habit of holding each other accountable now and making sure that we’re all putting in our best to get better.”

The men’s Track team will be losing its top three distance runners this fall: seniors PGM Digital Editor Karl Winter, Kyle McCabe, assistant news editor; and Jackson Felkins. Floris said Winter was the first runner from Pepperdine to reach regionals in outdoor track while Pepperdine was part of the NCAA.

“I know that that’s his goal, to get back there and get maybe a little bit further in the championship round of things, and he wants to bring along some of his teammates, so that would be really exciting,” Floris said.

Flint said the seniors were an important component in the community aspect of the team.

“I personally really hope to step up to be able to handle their roles to be running as well as they have,” Flint said. “And hopefully, I can get even better and I hope that other people do that as well. I would love to see multiple teammates make jumps with me because it’s so much easier to be motivated to kind of keep working and keep fighting when you have your brothers on the track with you.”