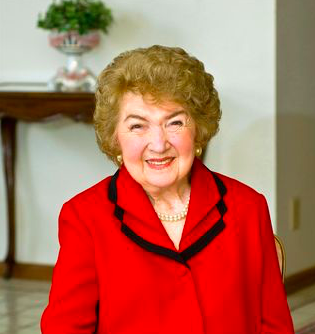 Young was born Helen Elizabeth Mattox on Aug. 31, 1918 and grew up in Oklahoma City before traveling to the west coast to attend George Pepperdine College (GPC) in South Los Angeles (now Pepperdine University in Malibu).

“While she was the consummate hostess, she could just as easily have been a CEO with her determination and insight,” President Andrew K. Benton said. “Debby and I have admired her from our first meeting and we have lived in gratitude for her example and friendship ever since. She was an Earth-bound angel in the lives of so many.”

While pursing her undergraduate business degree at GPC, Young met her husband M. Norvel Young, who at the time was a History professor who went on to be the College’s third president, according to a statement from the university. The two were married for nearly six decades and have four children together.

“I don’t believe I have ever known a person as gracious and welcoming as Helen Young,” Benton said. “Her keen intellect and interest in all that was around her, the twinkle in her eye that attended every smile, and her devotion to Norvel and their family simply defined and personified grace, humility, and her profoundly deep love for all who were part of her life.”

As the sixth of seven children, Young was raised in a devout Christian home that focused on Christian faith.

“Young grew up in a household dedicated to sharing Christ through serving the church, promoting Christian education, and loving without prejudice the privileged and the poor,” the statement said. “After years of witnessing her parents plant and serve various congregations of Churches of Christ, Young followed their example, loving and serving family and congregation.”

In the years between Norvel’s tenure from professor to president of GPC, the couple lived in Nashville, where the two earned graduate degrees, and Lubbock, Texas, where the couple ministered with the Broadway Church of Christ for 13 years, eventually growing the congregation to be one of the largest of the Churches of Christ in the U.S., according to the statement.

In the 1950s, the Youngs “encouraged the founding” of The Children’s Home of Lubbock, a home for homeless children, according to the statement. Young also founded the daily devotional guide “Power for Today” and edited it until 1972. She continued writing over the years for the guide’s 50,000 subscribers.

Young served as Pepperdine’s first lady from 1957 to 1971, but continued serving and fundraising for the university decades following her husband’s retirement.

“Young embraced this new role wholeheartedly, encouraging faculty members and their families while also entertaining donors and friends,” the statement said. “She became the consummate fundraiser and friend-maker for 41 years for Pepperdine University. Her warm greeting and her sincere caring remain in the hearts and minds of thousands of guests who came to her home for almost-daily breakfasts, dinners, and receptions.”

Historian and former Professor of History Richard Hughes wrote that Young was “perhaps the most visible and influential woman among Churches of Christ in the second half of the 20th Century.”

Young established the AWP “to use the power of women in support of Christian higher education, raising funds for student scholarships and influencing young people to consider Pepperdine as their college of choice,” and the organization was able to raise millions of dollars since it’s launch in 1958, the statement said.

An endowment of the M. Norvel and Helen Young Chair in Family Life has provided support and educational leadership at the University since 1992, according to the statement. The Young’s were the first benefactors for the Boone Center for the Family in 1996, creating “a university outreach dedicated to strengthening the family.” The M. Norvel and Helen Young Center was formally dedicated on the Drescher Graduate Campus in Malibu in 2005.

Young was honored with numerous awards and recognitions, including the Pepperdine Alumni Service Award, the Graduate School of Education and Psychology Dolores Award for Special Service, and the Pepperdine Medal of Honor. She also received high honors from Church of Christ sister schools for her impact on Christian education.

Young is survived by her daughters, Emily and Sara, and son, Matt; 13 grandchildren; and 16 great-grandchildren, according to the statement. She is preceded by her husband of 59 years, Norvel; her daughter, Marilyn Stewart; her granddaughter, Monica; and her six siblings.

A memorial service is scheduled for Jan. 5 at 11 a.m. in Firestone Fieldhouse. The family requests gifts be made in Young’s memory to AWP in lieu of flowers.

“Thank you for keeping the family in your prayers, especially as they near their first Christmas season without our beloved Honey,” the crowdfunding page said.