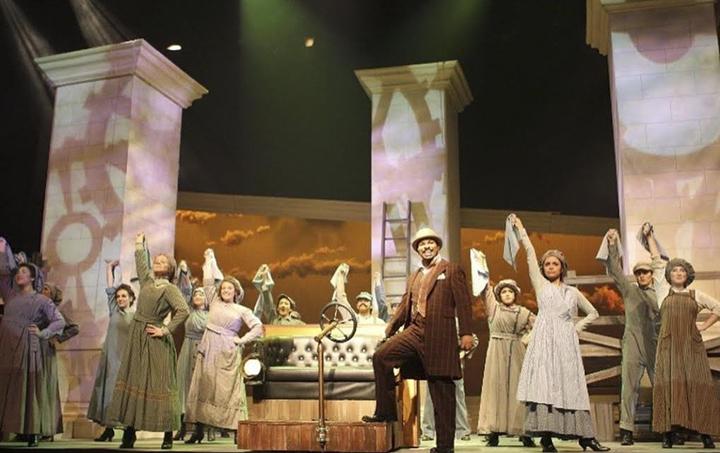 When President Jim Gash announced in a university-wide email July 22 that Pepperdine could not hold in-person classes, writing that classes on the Malibu campus would not “reflect Pepperdine’s standard of excellence,” the Theatre Department had to make adjustments.

While Zoom classes continue all over the Pepperdine campus, the members of the Theatre Department said they want everyone to know they will never stop delivering momentous stories through art.

Pepperdine’s Fine Arts Division provides students with experience and education in subjects such as studio art, art history, music and theatre arts. With the fall 2020 semester being held virtually, this poses some challenges to every department, especially the art of performance.

Bradley Griffin, theatre professor and divisional dean of Fine Arts, said the department spent time throughout the summer preparing for the possibility of online instruction.

“We initially planned a season that could be live-streamed as well as outdoor performances when we thought we were going to be on campus,” Griffin said.

The Theatre Department said for actors, live-streaming involves performing from home with studio kits as well as green screens, props and microphones to make it feel as real as possible. Griffin said this semester will include lots of these performances and rehearsals on Zoom.

Griffin said the Theatre Department planned a first-year showcase that will feature all incoming theatre majors. It will be live-streamed Sept. 18 and 19.

Griffin said “Polar Bears, Black Boys & Prairie Fringed Orchids“ — the play that was supposed to be performed in the Lindhurst Theatre this fall — is going to be performed virtually.

Although this play was chosen before COVID-19, Griffin said it is going to speak even more significantly to the current movement in our community because it explores performative activism.

“It is a play by Vincent Terrell Durham — a Black playwright living here in Los Angeles,” Griffin said. “It is told with a lot of humor, but it also has a really powerful message that comes through.”

Griffin said the play begins with a white woman who takes up a number of causes for racial equality and social justice.

“Throughout the play, the story will begin to question how effective her methods are,” Griffin said. “She is trying to look like someone who supports these causes without knowing the personal impact of what her support ought to look like.”

This semester the Theatre Department will not be lacking entertainment. Griffin said they have also planned another production in addition to the first-year showcase for the musical theater talents.

“Without being here in person, we cannot do a full musical,” Griffin said. “So Musical Theatre majors in the sophomore, junior and senior class will do a musical theater cabaret where they will each perform songs from the musical theater world.”

The dates for this production are Nov. 12, 13 and 14. The Theatre Department is planning to use the Center for the Arts to help with the advertising, and all of these productions will be streamed and ticketed with no cost, Griffin said.

Lauren Burton, a senior Theatre and Music major, has worked on and off stage in Pepperdine’s mainstage theater and opera productions. Burton said she chose Pepperdine because it offered a great program designed to teach both acting and classical voice. With class online, she said she is still enthusiastic about new experiences.

“It has been so special seeing everyone online and continuing working,” Burton said.

“This fall, I am most looking forward to the cabaret performances in November,” Burton said. “After learning more about the project during our first rehearsal this last Tuesday, I am really excited to see what all of the cast members will bring to the production.”

Burton said she is also learning how the new features on Zoom foster acting on different levels.

“My classes have begun to use different Zoom features that will make it easier to do scene work without seeing the other students not involved in the scene, creating projects that students can self-tape to submit,” Burton said.

Burton also said her home environment keeps her dedicated to her craft.

“Luckily for me, I am living with three other actors this semester, and we are hoping to write a short film or two for all of us to film together,” Burton said.

“I love my Theatre majors and can’t tell you how good it was to see them on Zoom yesterday — I got choked up,” Thomas-Grant said. “It was just so beautiful just to see their faces.”

Thomas-Grant is in her 25th year of teaching, and she said her favorite things are to teach her students, direct them in shows and take them to Scotland.

“Those are the things I live for,” Thomas-Grant said.

Despite the theater leaders attempting to make this the best semester given the circumstances, Thomas-Grant said they still face a lot of challenges.

“Theater is an in-person experience,” Thomas-Grant said. “It’s a challenge to have to pull all that in-person acting and production values and put it all on Zoom. Our directors are really being thoughtful about how best to do that.”

George Preston IV, senior Theatre major, has been acting since high school. He said he hopes to perform on Broadway and start his own theater program.

When Preston heard school would be online, he said he was upset for many reasons. Senior-year workshops and courses designed to send students into their real-world careers will be modified, and he is now left to figure out how performances will work this fall.

“My first thought was, ‘Wow, OK, I’m in this revolutionary show this year that’s meant for theater, and now we have to adjust our stage acting to on-camera acting,’” Preston said.

Senior Theatre major Clayton Mattingly moved to California at 8 years old to pursue acting. He said he fell in love with Pepperdine’s program and understands the sacrifices the division is making this year.

“I think [the theatre faculty members] are giving it their best shot, and it is such a hard situation,” Mattingly said. “They made the musical exclusive to the music majors.”

Due to the major-specific shows, Mattingly will not get to participate in a show in one of his last semesters as a Pepperdine Wave. He said he can’t fault the faculty for making some productions major-specific but believes some people are going to get left out.

With Pepperdine’s spring 2021 plans still in flux, Griffin said the department is already planning for next semester’s productions.

“We will do a smaller production — a play called “Ugly Lies the Bone,” a beautiful play about a female veteran,” Griffin said.

All casting is complete for this fall, but if students are interested in being involved in a spring production, Thomas-Grant said every Seaver student is always welcome to audition for a show.

Despite theater taking place online this semester, Mattingly said the Theatre major at Pepperdine is one of the most rigorous on campus, just in a different way than the rest.

“There are times when I have to be a math professor or a surfer dude who doesn’t know any math formulas — it’s a study of the entire psychological track,” Mattingly said. “To me, that takes a lot more time and vulnerability than any major does.”

As the fall semester unfolds and students involved in Pepperdine Performing Arts continue to work as hard they can, they are hoping fellow students will show their support.

Cathy-Thomas Grant said she wants to remind the Pepperdine community why we need music and performance art at all times but especially right now.

“Music and theater have the ability to address not only what’s going on in society at any given moment but also what’s internally going on in a human being,” Thomas-Grant said. “Theater, in general, is about creating and portraying human stories.”