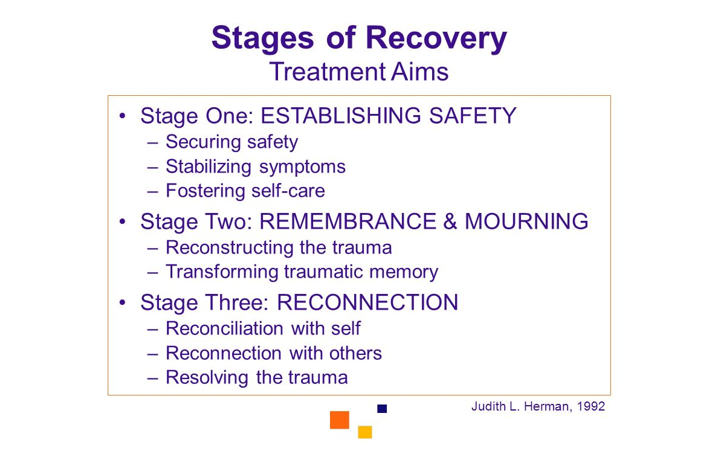 Stages of recovery from trauma as described by Judith Herman. Photo courtesy of Centers for Innovation in Health, Mental Health and Social Services.

The one-year anniversary of the Borderline Shooting and Woolsey Fire will have an impact on not just victims but also students and others present during the traumatic events, once again reminding them of events they may have tried to forget.

Not everyone has the same reaction to trauma and it is normal to experience a wide range of physical and emotional reactions.

Senior Jalen Frantal almost went to the Borderline Bar and Grill the night of the shooting but could not go because he was leaving early to attend a regional championship with his cross country team the next day.

“It wasn’t even on our minds the fact that there were fires nearby because we were all trying to go through the feelings of losing a Pepperdine student,” Frantal said.

The following day, Frantal’s landlord called and said the house that Frantal lived in with his teammates burned in the Woolsey Fire.

“Someone who didn’t experience being here during the fires and the shooting, you can’t really explain what it feels like,” Frantal said. “It’s just like this feeling of overwhelming uncertainty and a conglomeration of feelings you can’t really describe.”

Though many psychiatrists such as Judith Herman have provided descriptions of the phases of recovery from trauma, Shelle Welty, psychologist and associate director of the Pepperdine Counseling Center, wrote in an email that it is important to remember that people do not necessarily move through them in a linear fashion.

“While many members of our community may have begun moving toward the Remembrance and Mourning stage, it’s important to remember that all of us may revert back to the stage of needing more Safety and Stability as the anniversary approaches,” Welty wrote.

Some students have had ongoing concerns about their mental health ever since the time of the tragedies while others have bounced back quickly, said Connie Horton, vice president of Student Affairs.

“There’s sometimes with trauma, they call it the ‘sleeper effect’ where it can go away and go in the background for a while and then it gets triggered again,” Horton said.

Welty wrote there are a variety of things that might trigger students. These include the weather, the time of the semester, news of shootings and fires, smoke on campus and anticipation of anniversary events.

While Frantal said he can manage the negative emotional responses, he said he would not be able to go through the experience again.

“Yesterday, I walked out of my house and I saw all this smoke from the Tick Fire and I was like, ‘Oh shoot, here we go again,’” Frantal said. “It’s just that feeling of dread and uncertainty.”

These triggers can cause one’s body to react in various ways — including difficulty sleeping, difficulty concentrating, nightmares and lack of appetite — before one’s mind even recognizes the reasons for feelings of anxiety, sadness and fear, Welty wrote.

“It is OK to be reminded again,” Horton said. “We don’t usually work through things all at once and ‘done.’ That’s not how the human condition works.”

These triggers may also be a sign of one’s psyche saying there is still processing to be done, Horton said.

“Especially if you’re having nightmares or it’s starting to intrude again, then I would encourage people to go get the help they need,” Horton said. “We have and we will continue to support the Counseling Center so there’s not a waitlist.”

There are many possible reactions to an anniversary, Welty wrote.

Some people might experience the feelings associated with the trauma of a year ago. Others might want to avoid the anniversary as much as possible by leaving the area or avoiding times of remembrance. Others will welcome the opportunity to remember and mourn as a community. For some, the anniversary can be a time of reflecting on the past year, considering what has changed in the community and for the individual.

“People will have different responses and needs as the anniversary approaches,” Welty wrote. “It is helpful to remember that those around us may respond differently from us. Each of us has to find ways to remember and recover that feel congruent for us, that keep us moving forward.”

Welty emphasized the importance of self-care, especially since the upcoming anniversary comes at one of the busiest times of the semester.

“It is very important that we, communally and individually, allow space for these anniversaries,” Welty wrote. “They will affect us spiritually, physically, mentally and emotionally. To avoid remembering may be a helpful short-term strategy on difficult days, but it will not help us recover over the long term.”

Horton said the administration is currently in the process of hiring a resilience coordinator to plan different events in collaboration with multiple departments that focus on resilience.

“I think about it from a public health point of view of like, yes, downstream we’re dealing with it, we’re helping people in crisis, but let’s get upstream further,” Horton said. “How are people falling in the river? It’s good that we’re getting them when they’re drowning but let’s get them before they fall in.”

Frantal said the upcoming anniversary events are important for remembering the lives impacted and initiating conversations about future government and community actions, but he does not want to relive the experience.

“I definitely don’t want to feel the fear that I felt during that time,” Frantal said.

It is important to remember that it takes time to understand the world differently after a tragedy, Welty wrote.

“Restoration cannot be rushed,” Welty wrote. “It will be a natural process as we allow ourselves time to accept, remember and respond to a new reality.”