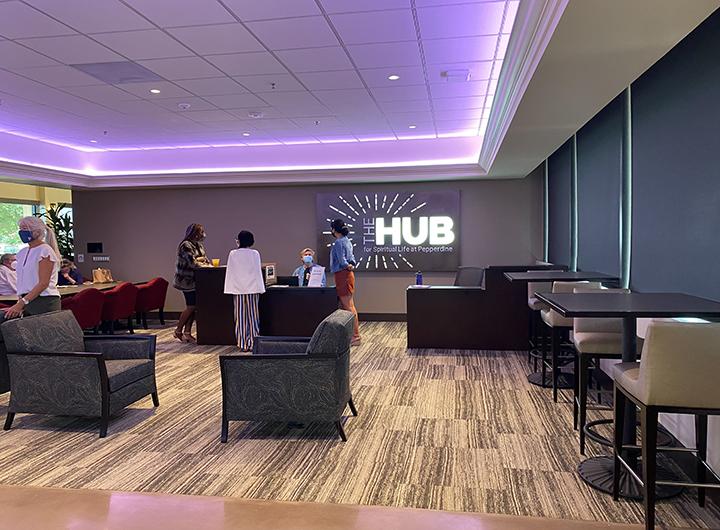 The Hub for Spiritual Life at Pepperdine aspires to be a central location for students in the exploration of their faith and community. The Hub’s first Foundation Gathering occurred Sept. 1, with University President Jim Gash as the keynote speaker. Photo by Ashley Mowreader

Pepperdine’s Hub for Spiritual Life teed off a new convocation at the Sept. 1 Foundation Gathering, kickstarting the Seaver 200 program with President Jim Gash attending as a keynote speaker. The Hub also gave out doughnuts and facilitated a book giveaway.

Pepperdine announced the new convocation program May 6. Unlike the previous program, which required all students to attend weekly convocations, Seaver 200 is structured for first-year and sophomore students who reside on campus. Pepperdine also renamed the Spiritual Life Office, the Hub for Spiritual Life and moved operations to the Light House on Malibu campus.

Foundation Gatherings are a portion of the Hub’s pilot Seaver 200 program, where first and second-year students come together as a community before breaking into smaller groups. Community service is one of the ways the Hub hopes to extend spiritual life beyond the Seaver 200 requirement, said Associate Chaplain Rachel Collins.

“As it fits into the Hub for Spiritual Life, it’s meant to be an on ramp, so it’s where everyone starts — by going through Seaver 200,” said Collins. “They’re going to get connected with spiritual life, they’re going to know who all the chaplains are, and then from there, what we hope is that they discover where they want to really engage and where they fit in.”

The first Foundation Gathering occurred at the Eddy D. Field Baseball Stadium, which created a unique worship space because the gathering was not held in a traditional chapel, Collins said.

“We are really encouraged by the turnout of that first Foundation Gathering and the content as well,” Collins said.

Seaver 200 requires students to attend 10 weeks of spiritual programming in the form of four Foundation Gatherings and six breakout group sessions. Students can miss one session without a grade penalty, according to Pepperdine’s website. When in need of an exemption — such as if one contracts COVID-19 — students can email the Pepperdine Student Care Team.

The outdoor setup created some problems for students, especially while exiting the field — something Collins said she and her team are working to solve for the next Foundation Gathering in three weeks. Other logistical changes include making sure each student gets a doughnut and ensuring no student feels short on time.

Gash served as the first event’s speaker, sharing about trust in God. Gash focused on his experience in Uganda, where he worked to absolve a man named Tumusiime Henry from two alleged murder charges.

The Foundation Gathering concluded with Gash live-video chatting with Henry, who led the students in prayer.

“Each time my mom was visiting me, she would tell me, ‘Henry, get strong,'” Henry said. “‘Nothing lasts forever, except the word of God.’ She would continue to tell me that sometimes God uses a bad thing and turns it into a good thing later, so I believed in her — and praise King Jesus that what she says came to us.”

Seaver 200 Falls Into a Rhythm

As a part of the Connect team, Collins oversees Seaver 200, spiritual mentoring and student ministry clubs. She said the intention behind the Hub is for students to have one consolidated space to approach with their spiritual needs.

Seaver 200, Collins said, has a rhythm with two or three weeks of small groups — following one Foundation Gathering with both first-years and sophomores in attendance — and the cycle will repeat until mid-November.

As the first week of breakout groups approaches, Collins said the Connect team is working with students to fix problems in scheduling and registration.

Student Experiences With the Hub

Sophomore Owen Walsh said he is attending the Sacred Yoga breakout group. While hoping to optimize fitness, Walsh said he chose this group because students quickly filled up his preferred groups, which he would have attended alongside friends.

“I’ll probably meet some cool people,” Walsh said. “I wasn’t planning on building a whole ton of community from yoga.”

Walsh said he wished the Hub sent clearer communication to students because he was unaware he would need to sign up for breakout groups until after the deadline.

At the Foundation Gathering, Walsh said what really stood out for him was the free books Pepperdine gave away. He said, however, he disliked how the crowd was spread out.

“It seemed like we were packed in there pretty tight, which I wasn’t really like super crazy about,” Walsh said. “There are probably better places where they could get us all gathered where it won’t involve waiting in line for so long.”

Before the semester began, Walsh said he attended several worship events at Pepperdine as a way to connect with his peers.

“From what I’ve seen, they usually have one or two guys present stuff,” Walsh said. “If they could bring in a bigger host of speakers, that’d be more interesting for the people who go regularly.”