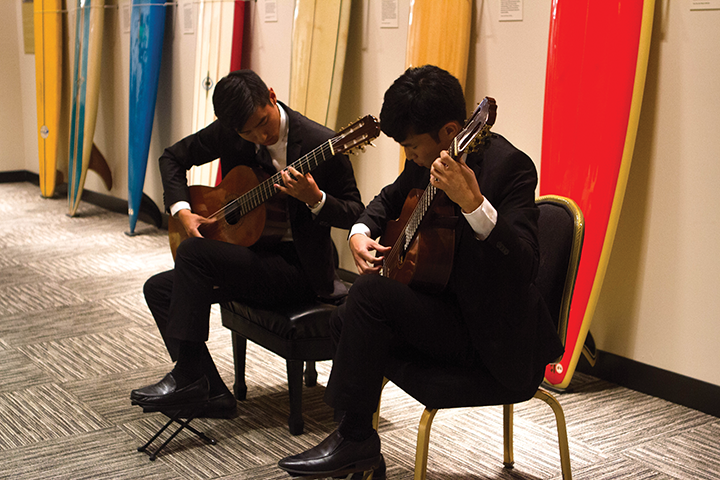 The Pepperdine Classical Guitar Department showcased its skills for a night, filling Payson Library with music.

The Pepperdine Classical Guitar Department brought music to Payson Library’s Surfboard Room, performing various pieces for the department’s monthly Mary Pickford-Stotsenberg Performances. Headed by Pepperdine’s own Distinguished Professor of Music and Chair in Classical Guitar, Christopher Parkening, the monthly performances are an opportunity for students in the Guitar Department to perform musical pieces and showcase their talents.

Parkening said the department’s monthly performances allow the students to organize the program and event themselves in coordination with each other. Parkening has performed all over the world in addition to Carnegie Hall and the White House.

“The goal is to help students exercise the importance of playing with beauty and warmth, while also helping them achieve personal excellence in mastering guitar,” Parkening said.

The performance featured 10 musical pieces ranging from different time periods — some pieces represented the Renaissance and some pieces were as contemporary as the 1950s. Students prepared the set list months in advance with the guidance of Parkening. He said the students also already planned their repertoire for the spring semester.

In preparation for these performances, the students practiced for hours in order to perfect each piece.

“On average, I would say I practice for about four hours each day, in addition to classes in the department and private lessons with Professor Parkening every other week.” Wesley Park, a fourth-year student at Pepperdine University, said.

“There is a lot of practice and commitment that is needed for these performances, which ultimately has the main purpose of showcasing the abilities of the guitar department,” Park said.

Done in collaboration with Payson Library, the Mary Pickford-Stotsenberg Performances are held in the Surfboard Room every second Tuesday of the month. The performances are then repeated on the Friday of the same week at the Malibu Public Library.

“These performances also provide a way to showcase the guitar department’s talents and programs,” Parkening said. “Pepperdine University was ranked first in the top colleges for classical guitar performance over Juilliard by Music School Central, and these performances showcase this.”

“I’m very proud of my students. They improve each year, and it shows in these performances.” Parkening said.