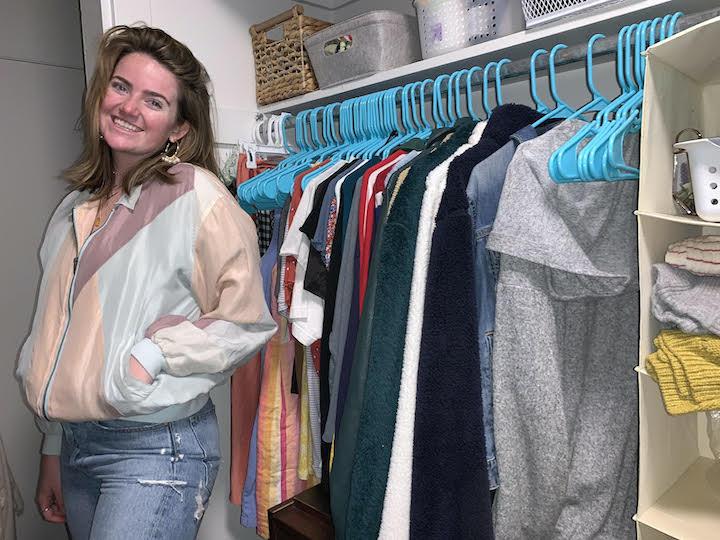 Fashion trends change by the week. In an instant, something that was cool and hip could be considered out of style.

In a city full of stars and wealth, how do Pepperdine students decide between affording their preferred aesthetic and an environmentally friendly closet?

“I thrift everything,” Hodson said. “Not just for environmental reasons but for ethical reasons, too. The way fast fashion workers are treated is — it’s just inhumane.”

The fashion industry’s carbon footprint accounts for over 8% of global climate impact, more than that of the airline and maritime industries combined, Megan Cerullo wrote in an April 2019 CBS News article.

In tandem with environmental impact, impoverished individuals are most often the main producers of fast fashion and high fashion alike, working in poor conditions in countries outside the U.S.

While some Pepperdine students may be ignorant of the various adverse effects of the fashion industry, many students and professors strive to lead a more sustainable lifestyle — starting with building a more conscious closet.

There is an environmental cost in addition to the price of each new article of clothing.

In 2016, the fashion and footwear industries produced 3.99 billion metric tons of carbon dioxide combined, according to a report from Quantis, a group of sustainability scientists and strategists.

“Water pollution is also a big deal in the fashion and garment industry,” said Chris Doran, Religion professor and founder and coordinator of Pepperdine’s Sustainability minor. “Whether it’s the dyes that are used, the tannins that are used to color things, or the creation of leather and other things like that, it all has a tremendous impact.”

The World Bank has found the dyeing and treatment of garments to be responsible for between 17 and 20% of industrial water pollution, estimated to cause 3.575 million deaths by water-related diseases per year.

“I would say that the effects of the fashion industry are definitely more obscure,” Hodson said. “I know a lot of young people who shop at places that are budget friendly and generally do create a lot of waste and are not very ethical.”

Over 68% of Pepperdine students do not at all or only somewhat understand the effects fast fashion has on the environment, according to a Pepp Post poll of 66 students.

“Honestly, I don’t really know that much about the fashion industry’s effect on the environment because not that many people talk about it,” Ryan Bresingham, freshman, said. “Everyone talks about reusable cups and straws and recycling. You don’t hear about thrifting as a way to save the planet as much, or at least I haven’t.”

Even with a knowledge of what fast fashion is and the negative effects it has, students feel it is difficult to identify what stores are environmentally friendly and what stores sell fast fashion clothing.

“I know what fast fashion is, but I don’t know exactly where it is,” freshman Bella Jacobellis said. “I know all of those super cheap online retailers are, but how do I know when a store sells fast fashion?”

“It is not talked about enough,” Doran said. “We are all a part of a globalized chain, and we all have a moral responsibility to figure out, as much as we can, where what we wear is coming from.”

Doran credited the lack of conversation to the obscurity surrounding the process of how clothes are created and why they are created that way, coming mostly from larger corporate entities that rely on cheap material and labor to make a profit.

“There is a lot that goes on behind the scenes that many people are not aware of or maybe don’t want to be aware of,” Hodson said. “We don’t really want to talk about it. It’s a lot easier to look at a cute, cheap shirt and buy it than it is to be aware of what it took to create that and realize that the cost is a lot higher than what you see on a price tag.”

Baptist World Aid appraised the working conditions and environmental impact of 130 companies in April 2019, and many popular brands scored a grade of C or below on both worker empowerment — the avoidance of forced labor and child labor — and environmental management.

Chart of the most popular brands with the lowest worker empowerment scores, according to Baptist World Aid.

Only 35% of the 130 companies appraised have plans to improve their use of exploited or child labor in the coming years, and only 5% of the surveyed companies can demonstrate paying their workers a living wage.

“It is important to note that a high grade does not mean a company has a supply chain which is free from exploitation or environmental harm,” Baptist World Aid wrote in its report. “Rather, it is an indicator of the efforts the company is undertaking and the strength of its systems to reduce risk.”

A staggering number of popular clothing companies rely on cheap, outsourced labor to produce their clothes at the quickest rate possible with the highest net profit.

“A big part of having a ‘conscious closet’ for me is shopping from ethical brands,” Chivers said. “I don’t buy things from Nike or Forever 21 and H&M. I don’t remember exactly the statistics, but I know their workers are treated unjustly — I know they use sweatshops.”

Hodson, Tramm and Chivers all said they avoid Forever 21, a cheaper and more popular brand among young adults, in their sustainability journey. They also avoid Nike, H&M and American Eagle.

All four brands have released corporate statements regarding their relation to child labor and unfair wages, vowing to adjust their practices.

Forever 21 has been under fire since 2012 for the “sweatshop-like conditions” of its factories and how the employees of its factories were not being paid a living wage, according to CorpWatch.

“Forever 21, I think, produces so much waste,” Tramm said. “Not to mention the effect that it has on the people — the women and children and men — who make the shirts in the sweatshops; that is a whole other issue.”

Hodson said she has purchased around 25 new items since the start of her quest toward a conscious closet.

Tramm estimated that a quarter of her closet is thrifted or purchased secondhand.

Chivers said her closet has less than 10 items in it that were purchased new.

All three women picked up thrifting in high school as a way to lessen their individual carbon footprints and save money.

“Once I started doing it, I started to realize how much better that older, secondhand piece is for the environment rather than the piece that is going to last one wash,” Tramm said. “And it’s not just that — thrifting has had a really unique impact on my style.”

When it comes to sustainability, thrifting is not the only thing Hodson, Tramm and Chivers are doing to save the planet.

Hodson avoids single-use plastic while also saving and reusing glass bottles to give them a second life, such as through brewing kombucha.

Chivers strives to cut meat out of her diet, citing the meat and dairy industry as another huge contributor to climate change.

“I am trying to be an eco-warrior in any way I can in my daily life,” Tramm said.

Some Pepperdine professors make lifestyle changes and efforts to lead an eco-friendly lifestyle.

“I’m mostly a plant-based eater,” Doran said. “We have a small garden in our backyard. On the clothing side, I don’t buy new clothes very often at all. I support a company called icebreaker, which uses Merino wool that doesn’t have to be washed as often so I can reduce water and energy consumption.”

How to be an Eco-Warrior

“I know that people may feel grossed out or dirty wearing someone else’s old clothes,” Tramm said. “I used to feel that way too. But at the end of the day, you wash the clothes and they’re good as new, and you’re doing something so good for the Earth.”

“My sister felt that way when I first got into thrifting,” Chivers said. “She just really felt weird about wearing other people’s clothes.”

The poll found that out of the 30% of students who have never thrifted, over 24% were open to the idea and just over 6% say they would never shop secondhand.

For students looking to build a conscious closet or live sustainably, Hodson, Tramm, Chivers and Doran had endless advice and excitement.

“Wear something neutral that you feel comfortable and confident in,” Tramm said. “So you can make as many outfits as possible with one item that is already in your closet, like your favorite shirt or pair of jeans.”

Doran emphasized the importance of talking to people about climate change, citing good friend and climate scientist Katherine Hayhoe, who says the average American only mentions climate change once a year.

“If you are wearing clothes that are thrifted, those open up really cool conversations with people,” Doran said. “If you take people on thrifting trips with you, that opens up whole new conversations too.”

Everyone stressed the importance of being confident in making the choice to go thrifting and to remember that what is being done is helping the planet.

“I understand the negative connotations that we have been kind of conditioned to believe about thrifting — like how it’s for people who are financially troubled or it isn’t clean,” Chivers said. “Just forget about that. Go into your local Savers and find great pieces and remember that every piece has a good story, and you are giving that piece another life.”

As for the best thrift stores in the Pepperdine area, there are an abundance within a 20-mile radius.

“There’s this strip of thrift stores on one single street in Ventura,” Hodson said. “It’s such a great experience because if you come out of one store empty handed, there’s another one a block and a half away waiting for you.”

Doran brought up that even as a college student, there is a level of control over what one wears and where it is purchased from.

“You have a lot of purchasing power,” Chivers agreed. “That is what fuels these corporations, whether you are doing it consciously or not. When you are buying things from a clothing company, you are saying, ‘I stand by your practices.’ It’s important to always keep that in the back of your head when you’re going out shopping.”