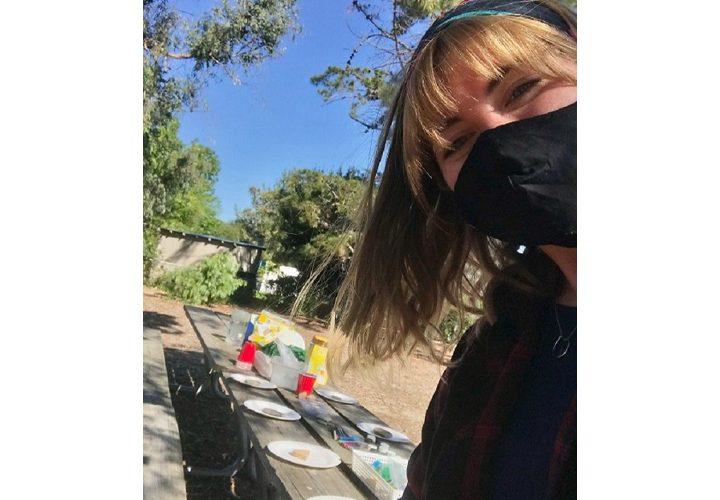 Sophomore Serah Hodson poses as she sets up a craft table for the small Bible study she leads on Sundays at the Veronica Springs Church in Santa Barbara, Calif., on March 21. Hodson said because of her church’s small size, the community has been able to gather outside for different events. Photo Courtesy of Serah Hodson

After a year of virtual services and COVID-19 regulations requiring social distance, members of the Pepperdine community continue to struggle with feeling isolated from their faith communities. Students chase connection with their faiths and others to better face the challenges of COVID-19. Most said they are jumping at opportunities to worship in person.

“I mean it’s people first, relationships first, and that’s what the pandemic has taught me is that my relationship with God is really important,” said Isabelle Armstrong, sophomore and non-denominational Christian. “But there are so many aspects of that that can be bolstered by the relationships that I have with other Christians in my life. And those are completely indispensable.”

Students said they recognize the effects of virtual services and the benefits of in-person service as worship centers begin to open their doors. Pepperdine members said they believe the pandemic will continue to shape religious practice.

Approximately 76% of adults said they feel safe attending a religious service, according to a March 22 Pew Research Center report. Roughly 64% said their congregation was open with restrictions in place.

In the Pepperdine community, a Pepp Post poll of 59 students found roughly 56% of students attended in-person services in their home congregation, while about 44% could not attend in person. The poll skewed female and first-year.

The poll also found roughly 79% of students preferred in-person worship, and approximately 64% of students attend either in-person services, or both in-person and virtual services.

One of the students who has attended both virtual and in-person services, Raymond Rider, a junior Eastern Orthodox Christian from Lubbock, Texas, said he did not attend a virtual service before COVID-19. When his church, St. Andrew’s Greek Orthodox Church, went virtual, he attended every Sunday via Facebook Live.

One of the biggest challenges of remote worship Rider said, was the absence of communion. For Eastern Orthodox Christians, communion tradition involves the congregation sharing the same cup of wine, dropping in the bread and then using a shared spoon to scoop the bread out, Rider said.

Communion must be done in the presence of a priest and a chanter, who leads the sung liturgy, Rider said.

“If there is no communion there is no liturgy because that’s what the liturgy builds up to,” Rider said. “But the Orthodox liturgy is really, really important. It culminates in the Eucharist and communion, where we believe that Christ is truly present.”

Christopher Russell, a junior and Roman Catholic from Richmond, Ky., said virtual service was challenging for him because he prefers the in-person liturgy in a Latin service. His home church, St. Peter Parish in Lexington, did not offer virtual service, so he watched an international recording.

Roman Catholics believe communion during the Mass is the body and blood of Jesus Christ as poured out on Calvary and imparts real grace, Russell said.

“So when you have that on Zoom it’s not the same, quite physical location,” Russell said. “That’s what I like about going to church in person.”

Ari Schwarzberg, rabbi in-residence at Pepperdine and a follower of Orthodox Judaism, said a virtual service makes it harder to create a loving space and reach out to others.

“When you put yourself on mute and you’re listening to one person speak and then you’re praying to yourself, that is a different quality of prayer than when you’re praying in community,” Schwarzberg said. “And as good as the technology may be, I don’t think it can replace the power and the transcendence of a community of prayers in person with one another.”

A rule of Orthodox Judaism is individuals cannot use electricity on the Sabbath, Schwarzberg said, meaning his community cannot participate in virtual services on Sabbath days.

In Schwarzberg’s neighborhood in Los Angeles, there is a large Orthodox Jewish community, and small groups of people gather in each other’s backyards to read the service.

“It actually shows people’s incredible commitment to their religious community and worship,” Schwarzberg said. “That even without their synagogues running this in an official capacity on a screen, people have taken it into their own hands to create kind of mini synagogues outdoors in people’s backyards.”

The Supreme Court ruled Feb. 5, that Gov. Gavin Newsom’s ban on indoor worship was unconstitutional, Tim Blodgett wrote in a Feb. 7 CBS8 news article. The court found in favor of South Bay United Pentecostal Church. They filed suit in May 2020.

The court upheld California’s restrictions on chanting or singing indoors and the capacity cap limiting attendance to 25% of building capacity.

When Serah Hodson, a sophomore and non-denominational Christian, first attended outdoor, in-person services at her hometown church, Veronica Springs Church in Santa Barbara, Calif., she said she had anxiety about returning. But, since Hodson’s return in early summer 2020, she is now more comfortable.

“I’ve been really blessed to be a part of such a small church community because there’s so many things that it’s safe for us to do, or at least comparatively safe for us to do, that pretty much any other church that I know of wouldn’t be able to,” Hodson said

On Sundays, Hodson said she leads a Bible study group. She grew up with members of her congregation, and returning to in-person services allowed her to reconnect with them.

In her hometown, Abilene, Texas, Armstrong said she is happy to attend in-person services with her congregation at Oldham Lane Church of Christ, following COVID-19 regulations.

“It’s just been really nice to go back to in-person worship because the fellowship is different, the spontaneity that comes with getting to worship in the same place and talk together afterward and go out to eat and all that kind of stuff,” Armstrong said. 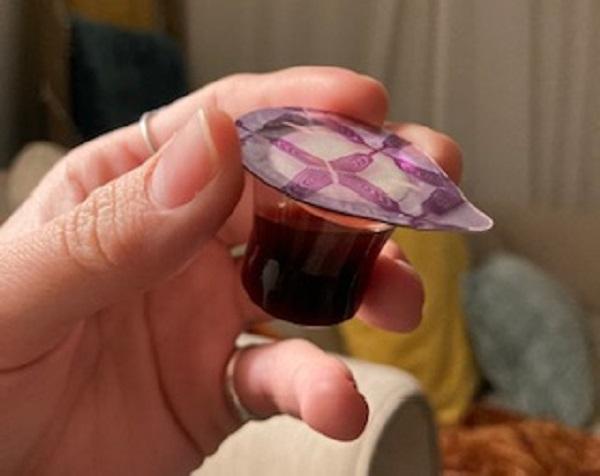 Sophomore Isabella Armstrong holds a pre-packaged cup her church gave her containing grape juice and a wafer in her living room April 1. Armstrong said she uses these cups when attending in-person services and when watching virtual services from home. Photo Courtesy of Isabella Armstrong

Daniel Rodriguez is divisional dean of the Religion and Philosophy Division at Seaver College and a servant leader and member of the preaching team at Hollywood Church of Christ. Rodriguez said his congregation transitioned to hybrid services in mid-March.

To keep members of his congregation safe, Rodriguez’s church will distribute communion using separate tables with small cups containing bread and wine. Rodriguez said it will be some time before his congregation returns to passing trays where members break and then share the unleavened bread.

Eric Wilson, preaching minister for the University Church of Christ located on Pepperdine’s campus, said it is important to minimize both the spiritual and physical risk people face when attending in-person service.

“Are the leaders of that church healthy people, are they spiritually healthy?” Wilson said. “What is that place you are trying to lead us to? They’ve got to have an answer to that question. And I hope that answer is rooted in Scripture, and it is relevant to the lives that we are living today.”

Created by Wapcaplet in Inkscape under the Creative Commons Attribution-Share Alike 3.0 Unported

Religious Officials Look to the Future

Many community members raised questions regarding what a post-COVID-19 religious community will look like. As people adjust to this new version of worship, there is a question of whether people will return to the traditional rabbi-led Sabbath, or stay with the decentralized version, Schwarzberg said.

“That’s a concern that the type of community that has existed and been the lifeblood of our community for so long, is that something that we could see a little bit diluted?” Schwarzberg said. “And how will that return and how much time will it take for that to return?”

As people become more comfortable with both the technology and returning to in-person services, Schwarzberg said, there is a possibility hybrid options will exist.

“Where people who may feel that they don’t have the time to drive that morning, or they want to be able to do two things at once, there’s going to be an expectation, I think for better and for worse, that institutions provide both an in-person option and a virtual option,” Schwarzberg said.

Wilson said he is concerned about the return to in-person services and the realization that reopening has not solved of the problems COVID-19 exposed.

“Because my sense is that after the shine wears off, the real sort of interior work is exposed,” Wilson said. “And then what are people going to do when they realize ‘Wow, we’ve been away from each other, and I’ve been super lonely.’”

The challenges people face, Rodriguez said, allow people to learn about the core of their personal faiths.

“This whole pandemic has helped them identify some fundamental flaws [in their faith],” Rodriguez said. “For other people, this has been a time to thrive. In fact, I would say that’s been the most exciting thing at our church.” 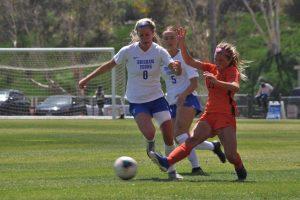 Pepperdine's Shelby Little (in orange) attempts a tackle on BYU's Mikayla Colohan (No. 8) during Saturday's match in Malibu....
Copyright 2013 Jupiter Premium Magazine Theme
Back to top