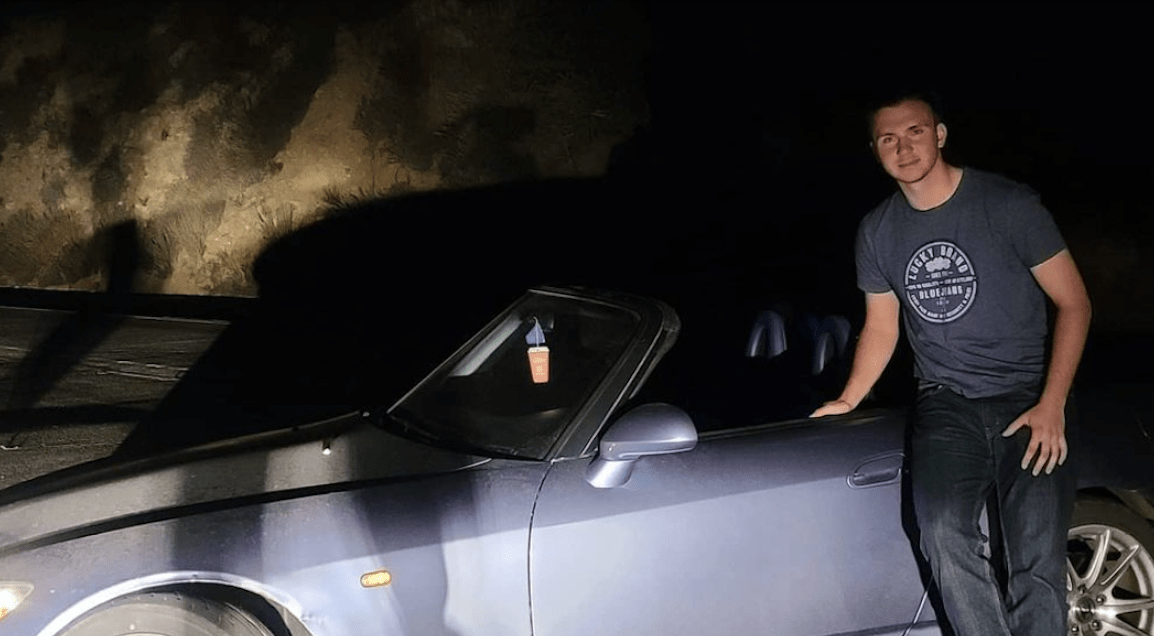 Sophomore Nicholay Osokin stands next to a car at Azusa Canyon. Osokin posted this photo on his Instagram on Feb. 18, around 10 months before he died in a car accident. Photo courtesy of Nicholay Osokin’s Instagram

Pepperdine community members continue to remember sophomore Nicholay Osokin and his life after receiving news of his death Nov. 15.

There will be a memorial service in Stauffer Chapel for a time of prayer, remembrance and celebration of Osokin’s life Wednesday, Dec. 8, from 10 to 10:45 a.m., University Chaplain Sara Barton wrote in a Dec. 3 email to the Pepperdine community.

“Please join us all in lifting up Nicholay’s family, friends, and loved ones in prayer and remembering such a beloved member of our Pepperdine community,” Barton wrote.

Junior Brian Wagner said he met Osokin while on a drive in Malibu on Piuma Road this fall semester and Osokin joined Wagner to start an unofficial car club at Pepperdine. In the short time he knew Osokin, Wagner said he appreciated Osokin’s kindness toward others.

“He had a spirit of giving and helping others,” Wagner said. “He was always very cheerful and always wanted to get everything rolling and going.”

“He was an avid table tennis player,” said International Studies Professor Felicity Vabulas. “He told me that he was excited to take [International Relations] in order to better understand global politics as he faced opponents from all over the world.”

Junior Amir Mehraban, another member of the car club, said he and Osokin met in their COM 180 class this semester and bonded over their interest in cars. Mehraban said Osokin shared his love for formula racing, drag racing and Asian cars, in particular.

“He was one of the biggest influential factors behind the club,” Mehraban said.

Mehraban said he remembers Osokin bringing an actual car part to use in a speech in their COM 180 class and how knowledgeable and passionate Osokin was about cars.

Communication Professor Daniel Overton said he also recollects Osokin quoting Joseph Campbell in one of his speeches in class: “The privilege of a lifetime is being who you are.”

“Nicholay was unapologetically himself in the best possible way, and I am privileged to have known him,” Overton said. “I am better for it.”

Wagner said Osokin launch the social media for the car club and also started some of the drives the club participated in off campus.

The unofficial car club at Pepperdine posts photos of Nicholay Osokin’s car, introducing him as a member of the club Sept. 12. Osokin launch the group’s social media account, bringing in more members. Photo courtesy of @PepperdineCarClub on Instagram

“He often put together events for all of us to go on drives and took the lead making sure everyone made it through safely,” Wagner wrote in a letter to the Osokin family from the car club.

Members of the car club organized a memorial drive in honor of Osokin on Nov. 16.

Mehraban was the one who brought up the idea for a memorial drive, he said.

“I just told people in the club, ‘Hey, we should commemorate him and remember him by having a little cruise or drive with all the people in the club, because that’s what he would have wanted, really, for us to do,’” Mehraban said. “He loved cruising. He loved driving, especially on PCH, and that’s the least we can do in homage of Nicholay.”

Wagner said around 35 people came together, along with 30 cars. The drive started at the Firestone Fieldhouse parking lot, and around 18 cars drove in a line up Kanan road toward In-N-Out Burger. The memorial also included a moment of silence for Osokin.

Mehraban said seeing people come together to discuss cars reminded him of the way Osokin found joy in sharing his passions and knowledge with anyone who expressed interest.

Sophomore Nick Wheeler attended the memorial drive in honor of Osokin. Wheeler said he and Osokin met and became friends at the Year 2 retreat at the beginning of the fall semester.

Wheeler said he fondly remembers sitting with Osokin at the retreat and getting to know and laughing with one another.

“He was a kind, open person,” Wheeler said. “He was ready and willing to talk to anybody in front of him, anybody who said hi — or even if they didn’t say hi, he’d say hi himself. He was always just welcoming and never shut any idea down. I know I could talk to him about anything.”

Wheeler said he admired Osokin’s ability to be unapologetically himself and remembers him as a good friend who could always make people laugh and look at things positively.

While Mehraban said did not know Osokin for a long time, he feels like he did and will always remember him.

“It’s sad to see him not here anymore,” Mehraban said. “The world lost a smart man who could have become a much bigger, influential man in the future, but we also remember him as the great man he was.”

“Nicholay was a brilliant student,” Overton said. “He was as driven and conscientious a student as I have ever encountered. In our conversations, Nicholay made clear how deeply he cared about his friends and family and how specifically he anticipated making the world a better place through his business passions.”

Vabulas said Osokin was curious and thoughtful and she appreciated his globally minded contributions in discussions, because Osokin had spent parts of his life living in Kazakhstan and Russia.

“He quietly absorbed the class material then actively engaged in deep classroom discussions,” Vabulas said. “He had a gift for articulating complex arguments in an eloquent and insightful way. We will miss his calm and reflective presence.”

Overton also posted on his Facebook in memory of Osokin on Nov. 21, calling him “one of the brightest students he’s taught.”

Less than a week before Osokin’s death, Overton wrote, Osokin had come by Overton’s office to talk about an upcoming class project, and they ended up talking for more than hour about Osokin’s life at Pepperdine, his family and his goals.

“I remember thinking how busy I was that day; his visit was something of an interruption. But, clearly, in retrospect, that encounter in my office was such a blessing,” Overton wrote.

Community members can reach the Pepperdine Counseling Center at (310) 506-4210 for 24/7 counseling services and may email University Chaplain Sara Barton at sara.barton@pepperdine.edu for pastoral care. The Student Care Team also offers additional support services such as assistance in locating nearby mental health professionals.