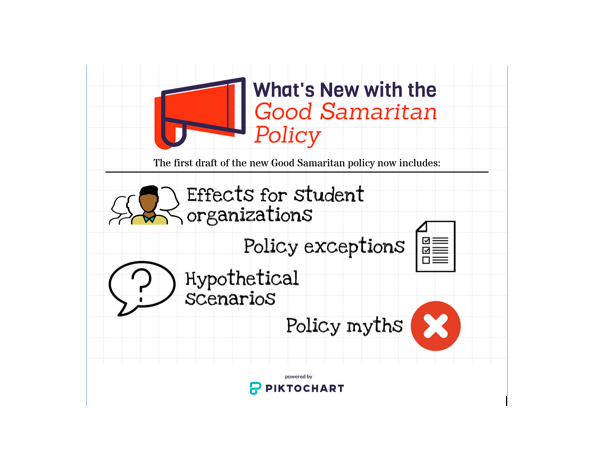 In the wake of a semester of controversy and conversation over the Good Samaritan policy, Pepperdine administration released a first draft of a revised and clarified policy. Dean of Students Mark Davis said the new draft was developed with an emphasis on student input.

The primary objective in creating a new Good Samaritan policy was for the sake of clarity, according to Davis.

“Ultimately, our goal is for people to feel like Pepperdine cares about them and there are no questions as to when the Good Samaritan policy will be applied and when it doesn’t apply,” Davis said.

New elements in the draft include exceptions to coverage by the policy, hypothetical scenarios and a section addressing common misconceptions or “myths.”

The two main exceptions to receiving immunity under the policy introduced in the new draft are when the caller contributed to the emergency situation at hand (i.e. hazing or sexual assault scenarios) and/or when the caller is not honest with DPS and/or emergency officials throughout the entire investigative process.

However, following the decision to deactivate Delta Tau Delta fraternity, Davis said he realized the particular role of student organizations at Pepperdine needed to be addressed.

“Some may hesitate because they are not only worried about themselves or their friend getting in trouble, but the fraternity or the student organization [getting in trouble as well],” Davis said. “And what we are trying to do with the Good Samaritan Policy is take away anything that might prevent those who might hesitate from doing the right thing and trying to get help.”

The new draft labels Good Samaritan action as a “mitigating factor” in a situation where “a student organization is found responsible for hosting an event where medical assistance is sought.”

A mitigating factor is a factor taken into consideration to diminish or excuse the punishment for a wrongdoing, but does not necessarily let the offender completely off the hook.

How the Draft was Formed

Davis said the policy revision process was highly influenced by collaboration with both Student Government Association (SGA) and leaders of Greek Life in campus.

“The Greek presidents, especially because of the Delt decision, had some specific concerns about the Good Samaritan Policy,” Davis said.

In addition to leaders of Greek organization representation, SGA sent a survey to every Pepperdine student in an attempt to gather as many opinions as possible. SGA shared this information with Davis, who said that all 250 responses were read and carefully considered in the policy revision process.

Another important method Pepperdine administration used in developing a new policy was a method known as “benchmarking” and external research on the subject.

“When we do benchmarking, we compare ourselves to other schools like us, in terms of academic reputation, size and different variables,” Davis explained. “There are 11 peer schools for Seaver College. So we read all 11 of their policies related to the Good Samaritan.”

Although this process was helpful, Davis said he wanted Pepperdine’s new policy to reflect the needs of our specific community.

“I think your policies should really be written to fit your school’s culture, not just what everyone else is doing,” Davis said. “It’s like how every family has their own house rules that fit their family.”

The next step for the Good Samaritan policy involves gathering feedback on the new draft until May 30, when administration hopes to begin to finalize changes.

Davis said he sent the policy draft to many relevant groups and individuals including the Student Health Advisory Board, Alcohol and Other Drug (AOD) Community and Coalition, the Panhellenic and Interfraternity Council, the Interclub Council, all Residential Advisors (RAs), Spiritual Life Advisors (SLAs), Director of Athletics Steve Potts, International Programs directors and the Intercultural Affairs office.

On Thursday, May 17, SGA President Austin Welch sent an email to all Pepperdine students, including the new policy draft as well as a survey gauging reactions to the new draft.

“All feedback will be taken into account and used to help shape and form what will become the final draft of the new Good Samaritan Policy that goes into effect before classes begin in August,” Welch wrote in the email.

Davis and Welch requested all feedback be submitted before the deadline of May 30.

“In the end, what I really hope is that this policy was formed with student input, that it took into account the unique cultural situation of our community and most importantly that it’s clear and its trusted,” Davis said.