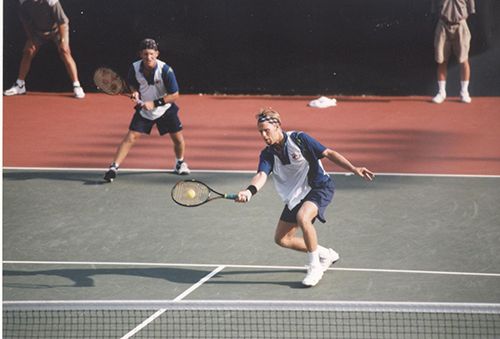 As a Wave, Lindstedt was an ITA All-American in 1998, as well as a part of the All-West Coast Conference first team in singles and doubles. With Lindstedt, the Waves reached the quarterfinals of the NCAA Tournament in 1998 before losing to Georgia 4-2, finishing the season with a 27-6 record. That same year, Lindstedt made it to the tournament’s Doubles Championship with partner Kelly Gullett, but fell in three sets to brothers Bob and Mike Bryan of Stanford.

Q: You’ve been to three previous Grand Slam finals but unfortunately came up short. How did you change up your preparation and training for the Australian Open?

A: Well, I just figured that there has to be something to learn, an advantage to have lost those three matches, not just the negative of losing them. So I simply felt more relaxed than the other finals. I finally realized what “enjoying the moment meant,” a very difficult thing to do in professional sport.

Q: You were originally meant to play with Jurgen Melzer but had to find a new partner at the last minute when Melzer was injured. How were you and Lukasz Kubot able to get together and get a feel for each other in time for the competition?

A: Me and Lukasz knew each other for years, from the Future [tournament] and Challenger [tour] days. He is a great doubles player and I simply asked him if he wanted to play when I knew Jurgen was not gonna be fit. He was my first choice.

Q: What was working for you and Lukasz the day of the final? What thoughts and emotions were you experiencing after the competition, and what does this win mean to you and your career?

A: We decided from the beginning what game plan we were gonna have and almost no matter what we [were] going to stick to it. We knew we had the weapons to win and we just had to execute.

After, it was just a circus of emotions: relief, happiness, pride, sadness. Yes, sadness: sad that my family could not be there to see it live. They have sacrificed so much for me and my sister and brother. For my career, it means that I have reached the ultimate goal I set for myself.

Q: Thinking about your time at Pepperdine, are there any favorite memories, on or off the court?

A: On-court memories are always about the team, not about my tennis. I loved being part of the team and that is all I think about when I think back to my college days. Off [the] court, there are a lot of memories, but none that I should share here.

Q: What advice would you give our current student-athletes in regard to bettering themselves on and off the playing field? Any advice for Pepperdine Tennis alumni trying to make it in the professional circuit?

A: If you think you work hard now, think again. As I worked my way up, I always thought I was a pretty hard worker. But boy was I wrong. At this level, we barely have any free time. Everything is tennis-related. On court, in the gym, rehab, working with physio’s — you have to live and breathe it. No one gives you anything.

Q: What was your favorite part about being a Pepperdine student-athlete?

A:Being part of a team. I love that.

Q: Favorite thing to do while in Malibu?

A:Being in the sun everyday was amazing and I loved that. And looking at the beautiful girls.

Q: Favorite food after a match?

A: Anything that is good for me, really.

Q: Favorite musician that you are currently listening to? Any go-to pre-match tunes you have to listen to before a big match?

A: Eric Prydz. I don’t really listen to music before the matches. I try to relax more than anything.

Q: If you weren’t a professional tennis player, what other career do you think you would have?

A: I have tried to answer this question many times but it is very difficult. Probably professional in another sport.

Q: If you could play doubles alongside any player, dead or alive, who would it be?

A: Well, I have to chose someone I have not played with then. Pat Rafter (just out of a winning perspective). Otherwise, Björn Borg, of course.

A: Wimbledon. By far. 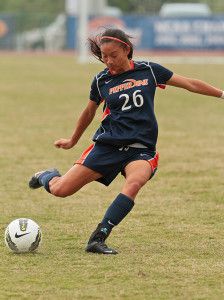 Women’s soccer player senior Michelle Pao has had an impressive career as a Wave. Her accolades include an NSCAA All-American second team honor in 2011, three NSCAA All-West Region pick (first team in 2013 and second team in 2011 and 2012), a WCC All-Freshman team honor in 2010, the first ever Wave athlete to earn All-West Coast Conference first team honors in all four years, and NCAA Tournament appearances in 2011 and 2012 with a WCC title in 2011.

Pao was recently drafted by New Jersey-based Sky Blue FC in the 2014 National Women’s Soccer League College Draft. The Graphic spoke with Pao about the drafting process and her time as a Waves athlete.

Q: What was it like to be a student-athlete here at Pepperdine?

A: It was good, the four years were pretty awesome. The first year I came in, we got a new strength and conditioning staff in the spring and they really helped drive us in the right direction and get us into the tournament.

My second year, we had a good shot in the NCAA tourney but lost to Long Beach, which was a bummer.

In my third year, we lost to Cal – I got injured and that sucked but I had time and support by our staff and I was able to bounce back.

Playing here has been a blessing in disguise. Amazing atmosphere to develop in, and the school has an amazing academic program too.

Q: What was it like on draft day, when you heard the news that you had been selected by Sky Blue FC?

A: It was kind of nerve-racking. I was talking to a couple coaches I’ve played for in the past and that helped. It was just surreal, honestly. It didn’t really hit me till later on. It’s a dream come true. I was excited but nervous at the same time — I get to play with the girls that I used to look up to. It’s intimidating but really awesome too.

Q: When does the NWSL season start?

A: Pre-season starts in March, but [the Pepperdine school year] finishes in April. But [the NWSL] are really cool about us getting our degrees so I’ll be finishing my degree before I go.

I’ll be playing with or against some of the top players in the nation, and the league is connected to Mexico and Canada so there’s a lot of competition. I get to play against players like Abbey Wambach … I’m going to have to mark her and that’s pretty insane!

Q: Have you been to New Jersey before? Are you prepared for the move?

A: I just had a conference call today with the whole team. A couple of the players I played with in a semi-pro league are on the team too so I know a couple players already.

Q: What do you think you will bring to the team?

A: I think I will be able to bring athleticism and a sense of drive. I’m really competitive and I don’t like to lose so we will see.

Q: What do you hope to accomplish as a professional?

I really to want to thank all my coaches and family and friends who supported me all the way.

A: I would have to say physiology because it’s an interesting class. Dr. Jaspers is really a great teacher. Anatomy is cool, learning the different parts of the body, and physiology really puts it all together.

Q: Favorite thing to do while in Malibu?

A: I’d have to say going on adventures. There are a lot of hiking places out here, which are neat. The beach is cool but it’s something that’s just kind of there after a while.

Q: Favorite food after a match?

A: Ramen. Not the instant ramen, but the legit Japanese ramen.

A: I got ankle surgery during winter break and needed a new show to watch, so my brother suggested I watch “White Collar,” and I caught up super fast!

Q: Favorite Musician that you are currently listening to?

Q: If you weren’t going to be a pro soccer player, what would you be?

A: If soccer doesn’t work out, I want to go to physicians assistance school.

Q: BONUS: Would you rather dip your finger in acid or get your big toe eaten by a camel?

A: Um, I guess I would dip my hand in acid because I kind of need my feet! 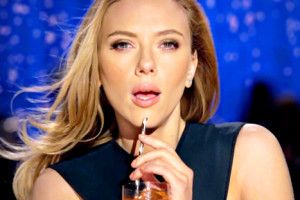 Photo courtesy of www.sodastreamusa.com So it turns out the much-hyped Super Bowl match-up of the NFL’s best offense...
Copyright 2013 Jupiter Premium Magazine Theme
Back to top