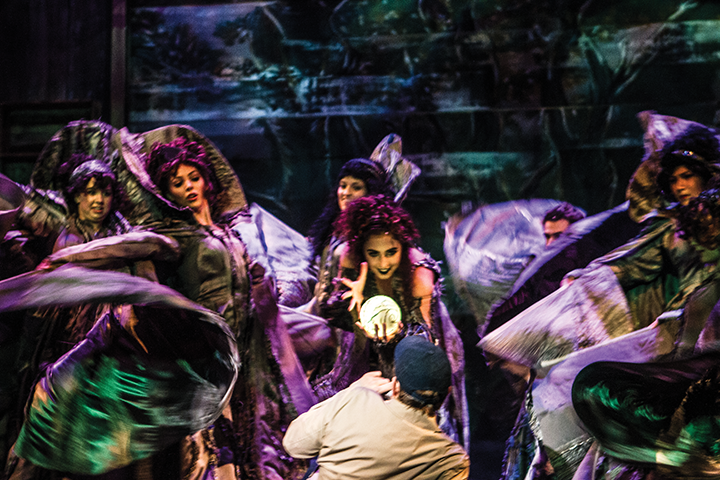 The cast and crew of Pepperdine’s musical this semester, “Big Fish,” promise the show will inspire tears, laughter and deep thought.

The Pepperdine Theatre Department’s fall musical, the 12-chair version of “Big Fish,” will debut Thursday, Nov. 9. The show will continue to take place in Smothers Theatre until Nov. 18. The larger-than-life show centers around the life of Edward Bloom, a traveling salesman and storyteller.

“Every play I direct has a message, but the message of this play is, given what’s happening in our world right now … that message of universal truth, love and faith and devotion,” director Cathy Thomas-Grant said. “I think that’s just a really important message to be able to hear and feel right now, and I hope it’s uplifting.”

“Big Fish” is a mix of light-hearted humor and deeper messages. Evatt Salinger, junior and lead role of Edward Bloom, said he believes this production is unique because of the multiple layers present in the performance.

“What this show has more than anything else is heart — in the happy moments and the sad moments,” Salinger said. “The audience and us experience such a wide range of emotions like any you can think of in life, from joy and ecstasy and exhilaration and fun to crushing sadness and catharsis and pain.”

The theme of exploring different extremes is present throughout the show in multiple ways. Especially in regards to the dichotomy between fantasy and reality. Edward Bloom lives his life looking for magic while his son, Will, has a much more realistic view.

Matt Westman, senior and director of sound design, described how every element of the auditory nature of the play goes along with emphasizing the difference between the real and the make-believe.

“From a technical point of view, we set constructs on ourselves … when we are in ‘reality,’ we are going to live by these guidelines in our design,” Westman said. “But when we move out of that into the stories and all that, we’re going to add more color or different sounds.”

Both the fairy tale elements of the story and the musical’s less well-known nature provided the actors with a liberating ability to make the show their own.

“[With well-known musicals], there are borders that you’re playing in and painting a picture between, but the picture kind of already has the frame on it,” Katie Semple, an ensemble performer in the show, said. “But with this show, we’ve been able to paint all over the place.”

Some cast members said they hoped this production will have an impact on audiences.

“This show is really enriching,” Audrey McKee, a junior playing the role of Sandra Bloom, said. “I think it will be able to touch people and have them leaving asking questions and thinking deeper thoughts.”

Beyond philosophical elements, audiences can also look forward to the visuals. There will be a “giant” on stilts, a wide array of colorful costumes and dance numbers. Another unique visual element of this show: The orchestra will be onstage, in costume, throughout the entirety of the show, rather than hidden in the pit.

“Our goal is not to have the audience walking out with a changed mind so much as it is to have them walking out more in touch with the lives they’re living and how they choose to see the world,” Salinger said.

Tickets to the show cost $20 at regular price, $10 for students and $8 each if bought in bundles of 10 (for the Thursday and Friday performances only). Buy tickets here or in the Smothers box office (open Monday through Friday, noon to 5 p.m.).