With President Andrew K. Benton’s recent announcement that he will step down from his position at the end of next school year, university leaders are considering the Pepperdine’s direction for the future. As part of that consideration, the community looks not only to the future, but the past, in order to navigate the complex issue of Pepperdine’s affiliation with the Churches of Christ.

“At its core, I don’t think [Pepperdine’s connection with the Church of Christ] has changed that much. The Church of Christ is very Bible-centric,” Benton said. “There are things that are very important to [members of the CoC] and I’d call those salvation issues. Sincere belief, observance of not only grace but obedience: those things haven’t changed, and I don’t know if they will change to be frank with you. But things like instrumental music, women’s role in worship- those things have changed and I think will change. Each congregation will decide them going forward.”

Despite changes to some CoC traditions and their presence on campus, Pepperdine leadership emphasized how the fundamental CoC values are just as present at Pepperdine as they were 80 years ago. 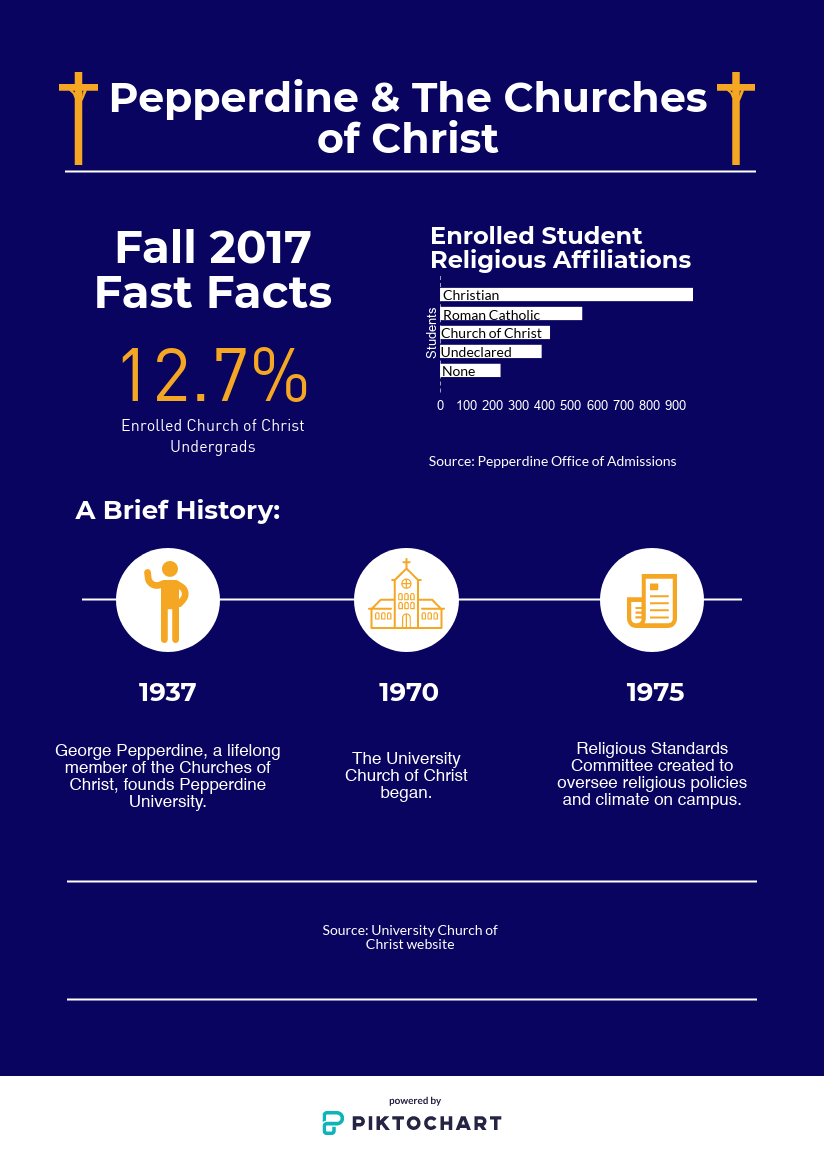 History of Pepperdine and the Church of Christ

David Baird, dean emeritus and professor of History, said George Pepperdine always intended the Churches of Christ to be a critical factor in the university.

“His intention is there would be a critical mass [of Churches of Christ faculty] and that hopefully students would also be from the Church [of Christ],” Baird said.

In the beginning, there were no requirements or bylaws that directly tied Pepperdine to the Churches of Christ. Baird said George Pepperdine “expected there to be a relationship, but he expected it to be through the faculty” and actually had “great misgivings” about a school directly connected with the church.

The administration under former President William Banowsky established many of Pepperdine’s official ties to the CoC in the bylaws of the school, according to Baird’s book on the history of Pepperdine, “Quest for Distinction.”

In 1975, the university’s Board of Leaders unanimously passed a motion expanding the board to 40 members and calling it the Board of Regents, requiring that the chair and at least 60 percent of this board would be members of the Churches of Christ and that a Religious Standards Committee (RSC) would be developed consisting solely of CoC members to oversee the religious policies and climate on campus, according to Baird’s book.

There have never been any rules requiring Pepperdine staff to be from the Churches of Christ. The only expectation for Pepperdine faculty is “to be an active member of some community of Christian faith,” according to Baird’s book. However, school bylaws require that certain top leadership positions, such as President and the Chairman of the Board, be occupied by Church of Christ members, Benton said.

The Nature of the Churches of Christ

To best understand the Churches of Christ’s affiliation with Pepperdine, it is helpful to understand how the denomination operates on its own. As a whole, the CoC are unique in that they have no headquarters, national base or unifying doctrine.

Al Sturgeon, preaching minister at the University Church of Christ (UCC), explained how this allows each congregation to make its own decisions regarding policies and traditions.

Referring to this organization in the CoC, Baird said he thinks the influence of the Churches of Christ on Pepperdine is “far less than other [Christian] schools because of the nature of doctrine of Churches of Christ.”

For example, Notre Dame is affiliated with the Roman Catholic Christian tradition. Because Catholicism has many traditions that are recognized world-wide, such as mass and penance, Catholicism can be easily identified in the setting of the university.

Church of Christ Presence at Pepperdine

Pepperdine’s on-campus church, the UCC is one concrete example of CoC presence on campus. The UCC is not operated by Pepperdine but is its own separate organization, Sturgeon said.

“The University Church of Christ is its own entity. It is a church. And Pepperdine has allowed this specific church to be a part of the community,” Sturgeon said. “Pepperdine has historically given financial aid to the church ​to support a campus ministry​ as well as generous access to facilities.”

Sturgeon said that, although a full age range is represented in UCC members, the majority of members are adults associated with Pepperdine in some way, from staff to alumni. He estimated that 30 students were regular members of the church.

“​Instead of asking its Religion courses to teach Church of Christ ​common beliefs​ like ​many of its sister schools, Pepperdine chose to ​allow​ a church ​on campus to serve as a witness ​for​ Church​es​ of Christ,” Sturgeon said. “It’s a unique approach to ​host a church family​ ​in the heart of campus ​instead ​of teaching doctrinal stances through its curriculum.”

University Chaplain Sara Barton and Benton also referred to Pepperdine’s Bible lecture series, Harbor, as a consistent practice rich with Church of Christ influences. The 75th annual series will take place May 1 through 4, and keynote speakers will “focus on Scripture and challenges for the church today,” Barton wrote in an email.

“Harbor, the Pepperdine Bible Lectures are hosted by Pepperdine and Churches of Christ, with a warm welcome to people from all church groups,” Barton wrote. “Central to Churches of Christ is the desire to study Scripture and serve the church, and the lecture series highlights those commitments.”

Another way Pepperdine supports its Churches of Christ roots is through offering scholarships to students with CoC backgrounds and connections. CoC students are able to apply to both the Christian Leadership Award and Associated Women for Pepperdine (AWP) scholarships.

Junior Paul Cox described his experience with the Churches of Christ as a student and Religion major.

Cox said the main ways he sees CoC influences at Pepperdine were things like the “structured, thoughtful, intellectual” approach in Convocation and in his Religion courses.

“As a Religion major, I am used to professors referring to Church of Christ tradition as ‘our tradition,'” Cox said. “I think the Religion Division is probably where [the CoC influence] is most emphasized.”

The Acapella Tradition and Other Practices

Because each Church of Christ across the nation is separate and makes its decisions individually, denomination-specific traditions or values can be difficult to define in a way that applies to Churches of Christ around the world.

For example, even the practice of non-instrumental, or acapella, worship is no longer consistently upheld by all Churches of Christ. Sturgeon indicated this is a practice that is shifting nationally.

“Traditionally and historically the Churches of Christ ​use​ acapp​ella, ​non-instrumental, music ​in their worship service​s​,” Sturgeon said. “However, there are ​several ​Churches of Christ throughout the United States​ now​, more in ​some of the larger churches in the ​South and Southeast​, that have started to incorporate​ both acapella and instrumental music in its services and probably a few that are completely instrumental.”

The University Church of Christ holds solely non-instrumental services. However, many other religious services on campus often include instrumental worship, such as Wednesday Chapel, Celebration Chapel and the Well. Sturgeon said the UCC also sponsors the Well, an instrumental worship night in the amphitheater every Thursday. He estimated around 300 students regularly attend.

“There ​has​ definitely not ​been ​a decision to ​move​ away from ​acappella music in our particular​ church, but there is ​now ​an opportunity to serve students and provide a worship experience ​on ​Thursday nights ​through The​ Well that seems to be ​popular and well-received,” Sturgeon said.

Although certain traditions, such as this practice of acappella worship, seem to be shifting at the university, Benton said that the core values of the CoC have and will stay the same. One core value of the Churches of Christ is unity, Barton said.

“A central ideal on which Churches of Christ were originally founded was a regard for the unity of all Christians,” Barton wrote in an email statement. “And I think Pepperdine is good at practicing unity, at setting a table that is welcoming.”

Sturgeon also emphasized this call for unity in the CoC.

“Pepperdine is unique and wonderful in creating an environment that welcomes people from a wide variety of viewpoints and backgrounds​,​ and I think the roots of that welcome come from the original unity movement that created Churches of Christ — that idea of bringing people together across dividing lines​,” Sturgeon said.

Another core value is the elevation of the individual’s relationship with God, according to Baird and Benton. Dean of the School of Law Paul Caron expressed how he perceived this element of CoC faith play out in the law school particularly.

“The responsibility and burden on each member of the congregation plays out very well in a university setting,” Caron said. “Pepperdine’s faculty and staff’s unique commitment to each and every student flows out of the theology of the church, and that’s a real tangible difference at this university and at the law school.”

While the president of the university and many other university leaders are affiliated with the Churches of Christ, all but one of the six current school deans are not CoC members.

Caron said he was born and raised Catholic and then spent 23 years at a non-denominational church in Cincinnati. It was when Caron became a faculty member at Pepperdine that he and his wife visited several churches and “fell in love” with the University Church of Christ because they felt “the heart and spirit” of the place was similar to their experience in Cincinnati. Currently, Caron is the only Church of Christ affiliated dean. However, he said this fact does not stop the other deans from supporting the school’s mission.

“It seems to me that [the non-CoC deans] embrace the missions of their schools despite the fact that they’re not members of the Church of Christ, obviously the university and the Board of Regents felt that they had a heart for the University’s mission,” Caron said.

Dean of the School of Public Policy Pete Peterson, a Presbyterian by affiliation, emphasized this same point.

“I would say it’s important that the school maintain its affiliation with the Church of Christ,” Peterson said. “I think all deans are supportive of that even if they are not Church of Christ members. It is something very important to the identity of the school and one that we should explore through our own disciplines.”

Although Peterson is not affiliated with the CoC, he said that he has enjoyed learning more about the Churches of Christ’s values and traditions.

“I would say as a policy school, what I’ve really come to appreciate about the Church of Christ is their commitment to empowering people,” Peterson said. “As a denomination, they are not only focused on scripture… they also see themselves as very self governing.”

The main challenge in maintaining a strong Church of Christ influence is simultaneously maintaining academic excellence, Baird said. “Its not always easy to do to find someone that has [a certain] specialty that also attends the Church of Christ. So you have to be realistic about it,” Baird said. “I think that—more than anything else — has brought the change in the faculty’s orientation.”

Benton acknowledged that the academic excellence of Pepperdine staff is ultimately the top priority.

Barton summed up the delicate balance of staying true to CoC ties as well as being home to a diverse range of religious backgrounds.

“In my opinion, the influence of the Churches of Christ is valued without being exclusive toward those who do not come from the tradition,” Barton said.

“My view is that our relationship with the Churches of Christ is very much a labor of love. And an effort to maintain fidelity to what George Pepperdine had in mind but still relate the university to current times,” Benton said.