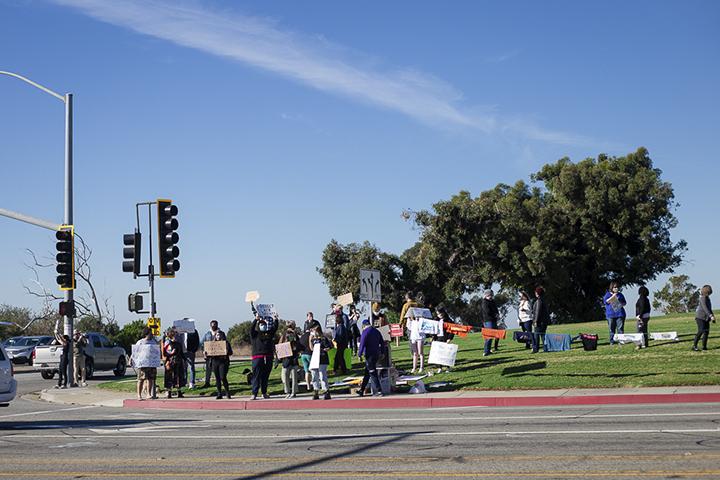 The Pepperdine Justice Coalition organized a protest outside of the Malibu campus the morning of Nov. 11 to stand with marginalized groups at Pepperdine and to call for more action and acknowledgment from administration regarding racial insensitivity on campus, specifically School of Public Policy Dean Pete Peterson’s Oct. 12 email.

Around 35 students, faculty, administrators and other community members attended the protest, bearing signs, chanting and decorating notecards to be displayed on the Freedom Wall. Protestors stood on the corner of Malibu Canyon Road and Pacific Coast Highway from 8:30 to 10:40 a.m., PST.

“It is inspiring to see everybody here this morning,” said senior George Preston IV. “Starting at my time at Pepperdine, there was no space like this for me, […] but to see everyone come together this morning, it is truly beautiful.”

PJC, a new group on campus made up of students, faculty and staff, shared the plans for the protest on Instagram on Nov. 9.

PJC organizer senior Hannah Rouse said the protest was hosted in person to further push administration to take action, considering virtual signs of protest and petition have not resulted in action from University executives.

PJC also offered a virtual option for those not in the Malibu area or unable to attend for other reasons. The Zoom gathering livestreamed the in person protest and offered people the opportunity to demand change from Pepperdine via social media.

Protestors decorated signs and stood facing the road, drawing honks of support —and occasionally of dissent — from passersby in cars.

Protestors pose for a final photo in front of the Pepperdine sign, socially distanced pic.twitter.com/MJrREPZRux

Faculty on campus met outside the Thornton Administrative Center and then walked down Alumni Park to join students protesting there.

Junior Hope Dease helped organize the event for PJC and runs the group’s social media page. Dease said she found the turnout encouraging and empowering, and though the group of protestors was small, she said the gathering gives her hope for the future of Pepperdine.

Juniors Cameron Zohary and Katie Smith echoed Dease’s sentiments and said they were surprised by the turnout but felt encouraged to see administrators’ appearance at the protest.

Barton said she and the other administrators came out to support students and listen to them because there has been a communication disconnect between the two groups and she is hoping to help bridge that.

President Jim Gash did not attend the protest because he is in Texas, but he gave a shoutout to the protestors during his President’s Briefing.

Senior Mary Buffaloe led the protestors in chants such as “Black lives matter,” “No justice, no peace” and “Hey, hey, ho, ho, Peterson has got to go.”

A few protestors, including Preston spoke about the Pepperdine community and the protest, both addressing the changes that need to take place to make the University an institution where all individuals feel like they belong and the efforts protestors made today.

Social Work professor Angela Smith led protestors in writing on notecards to display on the Freedom Wall. Protestors wrote statements asking for change at Pepperdine, starting with the phrase “I will belong at Pepperdine when” and providing their own answers. Smith and other faculty displayed the cards on the Freedom Wall because students are still not allowed on campus.