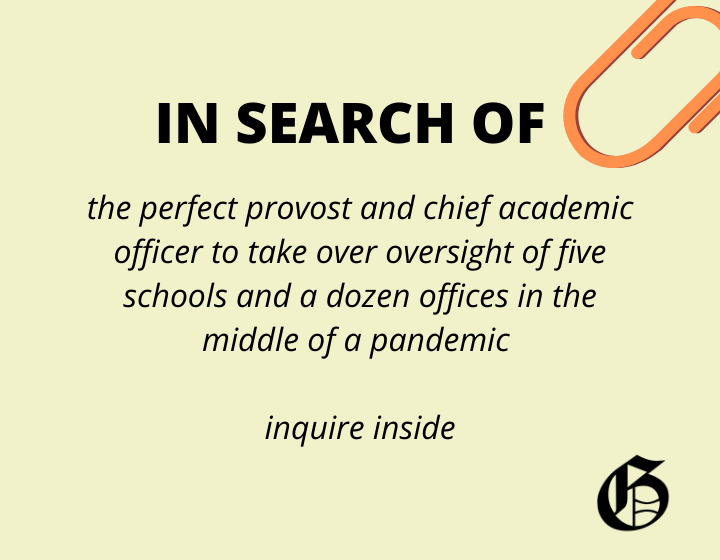 Sept. 1, Pepperdine announced Provost Rick Marrs would step down from his position July 31, 2021. After completing internal and external searches for Marrs’ successor, the University hosted six town halls for faculty to meet and interview the final candidates.

Three candidates are internal, having served at Pepperdine for years, and the other three come from similarly sized universities — Abilene Christian University, Boise State University and Lipscomb University.

“We have big expectations at Pepperdine, big dreams, big aspirations, and this person [the next Provost]; there’s a lot expected of them,” said Tim Perrin, senior vice president for strategic implementation and co-chair of the provost search committee. “I think we came forward with really great candidates to consider for that position.”

President Jim Gash will make the final decision in hiring the next provost, and the community can expect a decision in the next two weeks, Gash wrote in an April 5 email to the Graphic.

The Role of the Provost

The provost position is critical to a university’s development, as the provost serves as chief academic officer. Marrs described his role as developing the academic reputation of the school and advancing Pepperdine’s Christian mission.

“The new provost will partner with President Gash in accelerating Pepperdine’s upward ascent and national prominence,” according to Pepperdine’s Provost and Chief Academic Officer Position Profile.

The Provost’s Office leads and collaborates with the five deans of Pepperdine’s schools — Seaver College, the Graduate School of Psychology and Education, the School of Public Policy, the Caruso School of Law and Graziadio Business School.

“It’s a position that has really a big portfolio,” Perrin said. “That person is so important for us both as a community leader as a person of faith, that models for us what it looks like to be a serious scholar, an accomplished teacher, a person of integrity and faith [and] who is a leader by example in our community.”

The position profile outlines several qualities and attributes the University is hoping for in the next provost including strong interpersonal skills, self-awareness, budgeting, discernment, a commitment to teamwork, a willingness to engage with local communities and “the highest standards of character, including personal and professional integrity and ethics.”

The committee, made up of 16 Pepperdine administrators, faculty, staff and students including Marshall and Perrin, met for the first time in November and have since led the selection process, Perrin said.

“The first phase of the search focused on announcing and describing the position, and collecting qualified candidates,” according to a March 11 Office of the President update. “We received many nominations, expressions of interest, and completed applications.”

Much of the committee’s early work was coordinating with an external search firm to find candidates suitable to fill the role as well as consulting the internal search team using “best practices,” Perrin said.

“You want to make sure that you’re connecting and reaching out to all of the possible candidates for the position […] really taking all the steps necessary to make sure that we were telling our story, far and wide and attracting the best possible pool of candidates after national and even international search,” Perrin said.

The committee shrank the candidate pool to six individuals, three from Pepperdine and three from outside the university.

The six finalists are:

The finalists participated in virtual town halls with Pepperdine faculty and staff from March 24-31, according to a March 23 email from Public Relations. The candidates spoke and then responded to a question and answer session with staff, after which staff were able to submit feedback via survey.

While students did not have a designated town hall forum like staff and faculty, Perrin said student voices were engaged throughout the process by holding discussions between the candidates and student representatives from Pepperdine’s five schools.

Chris Doran, Religion professor and president of the Seaver Faculty Senate, said he sat in on several of the candidates’ town halls to ask questions. As Seaver Faculty President, Doran raised questions concerning faculty ranging from inclusion of LGBTQ+ faculty and staff and climate change readiness at the University to technology in the classroom and faculty exhaustion exacerbated due to the pandemic.

“As an individual faculty member, it would be important for that person to be a strong academic,” Doran said. “So they have a really professional record that shows their strength and academic quality, maybe even have strength in teaching so that they know what it’s like to be inside the classroom.”

Doran also said it is important to him to have a Provost who engages Pepperdine’s Christian mission, especially in the new Sustainability program.

“I don’t think there’s ever going to be a perfect person for any of these roles, but some have demonstrated abilities to articulate a vision of what they would see for the next 10 or 15 years of our University than others have done,” Doran said. “That’s impressive.”

A group of Seaver faculty wrote an open letter to Gash dated April 6 to share “hopes, concerns, and aims” for the next provost related to Pepperdine’s commitment to diversity, equity and inclusion, according to the letter.

The letter raises concerns from faculty regarding the administration’s lack of commitment to marginalized groups’ protection, nurturing and success at Pepperdine and the harm experienced at the university.

The letter concludes with three goals to better support POC and marginalized groups: to ensure belonging for them, to display a commitment for learning from their experiences and to work collaboratively with the new chief diversity officer and Seaver Diversity Council to help ensure equity and justice.

Marrs’ transition out of office comes at a critical time during Pepperdine’s preparations for a fully reopened fall. Pepperdine has yet to offer full in-person services to students after closing in March 2020. Doran noted this would be a critical time for someone like Marrs with decades of experience at Pepperdine to be in the provost role.

“As a faculty member, first, the timing does seem really weird that you would have someone who has as much experience as Provost Marrs move out, rather than wait another year or two when we would possibly be on the other side of this pandemic,” Doran said.

Gash wrote there is “never an ideal time,” for a senior leadership transition, but that Marrs extended his time at Pepperdine to help the University during the pandemic and will continue to serve until July 31.

“The next provost will be fully prepared to lead our academic enterprise as we return to on-ground classes this fall,” Gash wrote.

Once the Office of the President names the next provost, Marrs said he will spend the majority of his time helping with the transition.

“Often candidates who are applying to be provost sometimes can be surprised by the scope of what is going to come on their radar screen, so my job is really to help them transition in so that when they start on this one they hit the ground running,” Marrs said.

Marrs will take a sabbatical for the 2022 academic year before returning to the Religion department to teach full-time. During his time as provost Marrs taught upper-division Religion classes but said he would be open to returning to Elkins courses upon his return.

“We’ll see — I’ll teach whatever the divisional dean and Religion [and] Philosophy department wants me to teach, but I’m looking forward to it,” Marrs said.