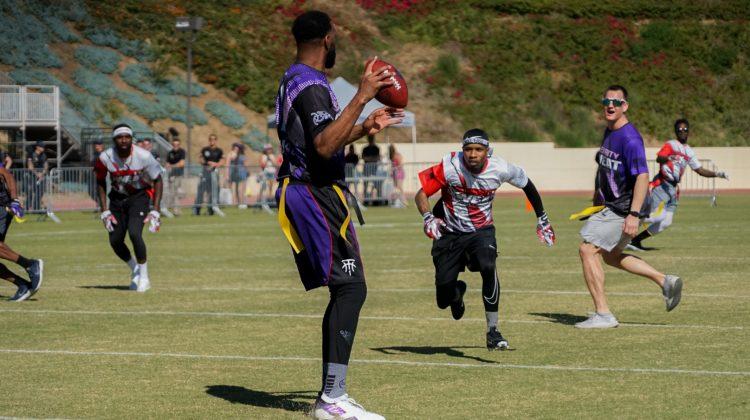 NBA Hall-of-Famer Tracy McGrady looks for an open teammate during the Celebrity Sweat Flag Football Game on Feb. 12. This year’s game was a rematch from 2020, where Team T-Mac won the game as well. Photos by Gabrielle Salgado

A sunbaked afternoon with a high of 80 degrees, students and fans swarmed the field Feb. 12, hoping to get a glimpse at celebrities, current and retired NFL players and musicians alike. The game exists to raise awareness for several military organizations and youth groups, WWE Global Ambassador Titus O’Neil said.

“It is a fun game,” O’Neil said. “We get to bring people from all walks of life, especially during Super Bowl weekend where everyone is in town anyway. To make a game to raise awareness and funds for our military is pretty special in the midst of all the other things that are going on during Super Bowl week.”

Musician Tai Verdes echoed O’Neil’s statement and said it’s a blessing to support the military because there is not a lot of opportunity to be around these influential people and to be in this space in general.

Among the Leap Frogs was Pepperdine alumnus Lieutenant Matt Carter (’13).

“The cool thing about this game was that, given the winds in the jump today, I was literally flying over my freshman dorm room for most of the jump,” Carter said.

Carter said he had been back to Pepperdine several times since graduating, but this was his first time approaching the school from the air.

“The thing that really struck me was the same reason that I came to Pepperdine was the same reason I joined the Naval Special Warfare,” Carter said. “And that was just the excitement of being in values and driven by mission, service, purpose and leadership. You know, that’s the exact same thing. So that was exciting. To me, it was like a real full circle moment.”

American fitness personality Billy Blanks said sharing the field with people in the military is special to him because he has two brothers who served in both the Army and Navy for 28 and 30 years, respectively. Blanks also has an uncle that is in the Army.

Junior Nicolette Garcia said that a highlight of the game was Diplo’s touchdown.

“It was a great game with a good back and forth, because that’s such a bummer when you come to a game and it’s kind of dead and doesn’t have that much momentum,” Garcia said. “You could tell that they were enjoying themselves and it was so funny seeing certain people who definitely aren’t football players making those good plays or even the fumbles.”

After receiving the MVP trophy, Lanez dove into the crowd that was chanting his name throughout the afternoon. Students and fans were ecstatic, and in celebration, Lanez gave the students his trophy.

Pepperdine students said they heard about the game from Housing and Residence Life’s emails regarding the closure of Rho parking lot. Sophomore Maci Brown said she had made plans to attend the game since she received the first email.

“I’m really excited for some Pepperdine community because I love football,” Brown said. “So this is the closest thing I’m getting: flag football and celebrities.”

Sophomore Dawson Storrs said he did not know the game would be happening until he left his residence hall, Seaside, but the event setup did not disturb him.

Storrs said, in light of allegations against Lanez, he wondered how the University felt about having him featured in the game.

Garcia said she knew a little about the charity through her own research on the event. As someone with a relative in the Navy, Garcia said she enjoyed watching the Leap Frogs parachute into the game.

After hearing music outside his window, senior Michael Kadlick went down to the field. Kadlick said he was excited for the free memorabilia, and hoped to see Michael Irvin.

Kadlick was also able to celebrate a Lanez touchdown when Lanez climbed over the fence and celebrated with fans.

“Actually, what might top that is the trophy giveaway from Tory Lanez to the boys,” Kadlec said. “He said this is for the boys. He’s Tory Lanez. He’s [the] man. He’s the people’s man, you know?”

Many Pepperdine students said they did not know about the charity the game supported.

“I definitely thought this was going to be like a cash grab kind of situation for the University,” Storrs said. “That was my take on it, just because they were taking away student parking and it just seemed like they were doing everything they can to get as many people to attend as possible.”