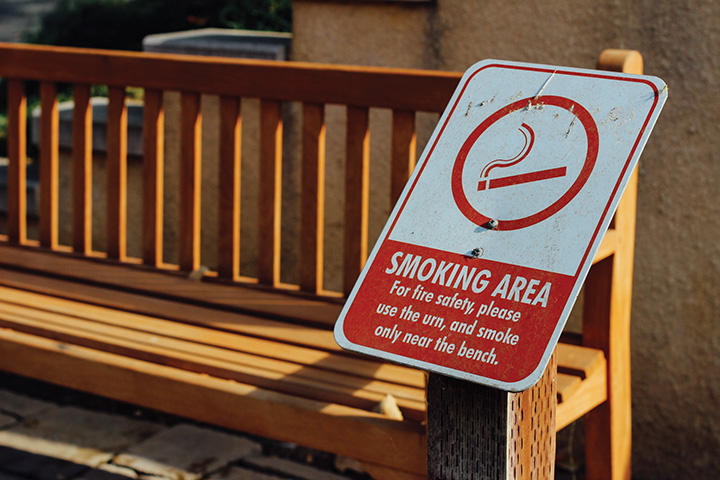 Pepperdine will transition to a smoke-free university starting Fall 2018, according to an email from Pepperdine’s Public Relations office.

This change will apply both to Pepperdine’s domestic and international campuses, though graduate campuses will retain designated outdoor smoking areas per their lease agreements, according to the email.

Director of Human Resources Sean Michael Phillips said the primary motivators for Pepperdine becoming smoke-free are concerns for the health and well-being of students, faculty, and staff as well as mitigating the risk of fire.

Phillips said the transition to being smoke-free is, in part, a response to requests from community members received over a number of years. “In 2014, the University Management Committee (UMC) adopted the current smoke-free campus’ policy which says that Pepperdine is smoke-free, apart from designated smoking areas on campus, with the intent of becoming 100 percent smoke-free in the future,” Phillips said.

Vice President for Student Affairs Connie Horton said the process of Pepperdine becoming smoke-free was intended to be a gradual evolution to give Pepperdine community members time to adjust to the changes.

A number of representatives were involved in the process of creating Pepperdine’s smoke-free policy, Phillips said. The University Management Committee was the group that voted the smoke-free initiative into effect and initiated the transition from the 2014 policy to the new policy, Phillips said. “But then there is what I see as an implementation committee that has committee members from a number of different areas on campus, human resources, student affairs, public safety, sustainability,” Phillips said.

Student representatives were also included in the planning of the new smoke-fee policy, Horton said. Members of the Student Government Association provided feedback such as encouraging the University Management Committee and the implementation committee to inform international students and other incoming students about the new policy.

During the process of planning the transition, those involved consulted statistics about smoking, health risks, the number of smoke-free campuses across the nation, as well as the number of wildfires resulting from cigarettes and smoking, Phillips said. The planning committee also talked to peer universities to learn how they underwent transitions to being smoke-free, Phillips said.

Horton said free counseling and medical support will be provided to those who need to quit smoking. “Some may find that more difficult than others depending on their habits and we want to be sensitive and supportive in that regard,” Horton said.

Student Government Association President Austin Welch said SGA wanted to ensure that students were given enough time to prepare for Pepperdine’s smoke-free policy. “There were suggestions to have [the transition] done earlier or later and the biggest thing that we wanted to make sure of was that when the decision was made that there was ample time for students to be made aware of that,” Welch said.

SGA wanted to ensure that those who were organizing the transition were cognizant of the needs of all students, Welch said. “International students, from a cultural perspective, smoking is much more of a cultural norm in other countries and I think that was something we just wanted to make sure we were bringing to the attention and having that be made aware of and making sure that we were representing all students’ needs,” Welch said.

Senior Mason Folse said she agrees with the decision for Pepperdine to become smoke-free. “Underclassmen and some of the upperclassmen live here,” Folse said. “If it were your home, you wouldn’t allow people to smoke if you didn’t want them to and you don’t really have that option if you live on campus.”

Senior Eliza Tarwater said students would smoke in non-designated areas, which caused her to have sinus problems as an allergic response. “I would be in my dorm, Hayes, and I would smell smoke outside. I was like ‘this is not what I want my house to smell like,” Tarwater said.

Senior Madison Findley said he also agrees with the adoption of the smoke-free policy, although he said he sees the potential for enforcement of the rule to be difficult. “Enforcement might be difficult amongst people who have been smoking for a long time,” Findley said. “I think if they are strict with enforcing with cigarettes, then we will see a big transition to vapes. They are a lot more subtle.”

Senior Jacob Zimbelman said he thinks an argument can be made against the change on the basis of personal freedom. “The people who smoke are not going to be in the Pepperdine mainstream so to me this has the effect of marginalizing them further,” Zimbelman said.

Zimbelman also said he is concerned about the anti-smoking therapy sessions he said he read will be part of the punishment for being caught smoking on campus next year. “I don’t like that it presupposes that these people are sick and they need healing,” Zimbelman said. “It can just be someone’s choice to smoke cigarettes and they don’t necessarily need counseling on that basis.”

Zimbelman said he thinks there are other areas of student health that can be addressed to benefit more people than the new smoke-free policy will. “I understand the health concerns of smoking but I think Pepperdine would probably lengthen our lives if they served healthier food in the Caf or made healthy food cheaper somehow,” Zimbelman said. “These are other issues of student health that could be making everyone healthier instead of just a few people.”

Senior Ryan Opton said he thinks banning smoking on Pepperdine’s campuses will not keep students from smoking and will lead to unsafe smoking behaviors. “I don’t agree with us making Pepperdine’s campus smoke free for the same reason I don’t think we should be controlling the use of alcohol either,” Opton said. “I think it fosters an environment in which the use of those is overrestricted and so people use them almost too much or unsafely.”

Sophomore Mauricio Chapa said one benefit of smoking areas is they provide students with an opportunity to momentarily escape the stresses of life. “By taking that away, you take away someone’s opportunity to, one, just think and get away from whatever they are doing,” Chapa said. “Also, when I see the smoke areas, I see happy conversations going on and I think that [smoking] is a good way to start a good conversation with someone. By taking away smoking, that will take away those conversations.”