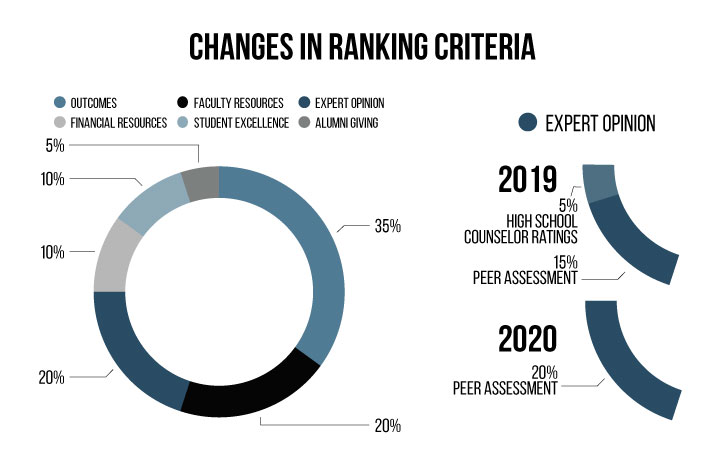 Pepperdine University ranked 50th in the 2020 edition of U.S. News and World Report’s college rankings list, a four-spot decline from the 2019 rankings.

U.S. News published their annual rankings in the beginning of September. This is the 4th year in a row that Pepperdine has placed in the top 50 of the rankings. The college edition of US News and World Reports receives attention from academia and high school students alike. Robert Morse, chief data strategist for U.S. News, wrote in an email that Pepperdine’s drop was a result of three main criteria.

“Pepperdine University moved down four spots in the ranking, which is not a significant change,” Morse wrote. “Pepperdine had year-over-year gains in some areas relative to other national universities, specifically in peer assessment and selectivity. While Pepperdine remained consistent in financial resources, it declined in faculty resources, alumni giving and graduation-rate performance, relative to its peers.”

Dean of Seaver Michael Feltner said he believes the drop is rather a change in the ranking criteria.

“It’s not like there was a fundamental change to Seaver College or at Pepperdine; it’s just that the methodology changed,” Feltner said.

The U.S. News and World Reports website outlines the six criteria they use to rank schools as well as how much weight each category is given:

“Last year, 5% of the ‘expert opinion’ ranking was high school counselor’s ratings of colleges,” Feltner said, “The other 15% was for what they call ‘peer assessment,’ which are ratings from other universities. This year, the full 20% is peer assessment.”

Feltner said historically Pepperdine has done best at high school counselor’ ratings, but not as well on peer assessment. Morse’s blog, “Morse Code: Inside the College Rankings” justifies the omission.

“U.S. News discontinued that ranking factor in part because U.S. News had greater confidence in the data and the significantly increased response rates from the peer assessment surveys,” Morse writes. “Thus, expert opinion remains at 20% of the methodology.”

The provost and chief academic officer for Seaver College, Rick Marrs, votes for the U.S. News ranking every year.

“I get materials from U.S. News, and on a scale of one-to-five, I go through and rate every school in the country,” Marrs said. “Some schools I’ve never heard of.”

“High school counselors tend to make their decisions based on not just what they know about the schools,” Marrs said. “But when their students come back, high school graduates send them notes and say ‘I recommend Pepperdine. It’s phenomenal. I love it.'”

Marrs said Pepperdine should be happy to be in the top 50 because the criteria doesn’t work in the university’s favor.

“The metrics tend to privilege the research universities and the wealthy universities, particularly the Ivy’s, and we are not either of those,” Marrs said. “The fact that we end up in the top 50 is pretty remarkable, because we tend to be young, and don’t have the same endowment of schools we’re competing against.”

Morse wrote in his email that the rankings are a good starting point for prospective students in their search for schools.

“College is an important and costly investment,” Morse wrote. “U.S. News has always recommended that prospective students use the rankings as a start, not an answer. The rankings are a jumping-off point to create a list of schools, narrow down that list, and compare overall academic quality.”

Provost Marrs said there are qualities Pepperdine has that the rankings do not portray.

“You have parents looking at Stanford and Pepperdine, and they’re really apples and oranges,” Marrs said. “What I tell parents is, ‘What you get at Pepperdine as a freshman is full professors — people who are top of the heap, teaching entry-level classes.’ There’s no metric for that.”

Feltner acknowledged the importance of the rankings.

“I read a number of things that either speak positively to the rankings or speak against them,” Feltner said. “In some ways, it doesn’t matter whether we have an opinion on it, because we know that it influences the decision making of prospective students.”

He said in the future, Pepperdine will not pander to the ranking criteria, but rather look at what the school is doing right and keep moving the right direction.

“You know, if we look at all the things we’ve achieved: we’re top 50 for undergraduate business programs, top 50 for veterans, we’re number 11 for study abroad,” Feltner said. “There’s a lot of really good information that I think speaks to things that we value. Unquestionably, no one likes to go down. But to stay in the top 50? Yes, outstanding performance for Pepperdine.” 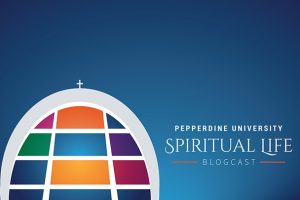