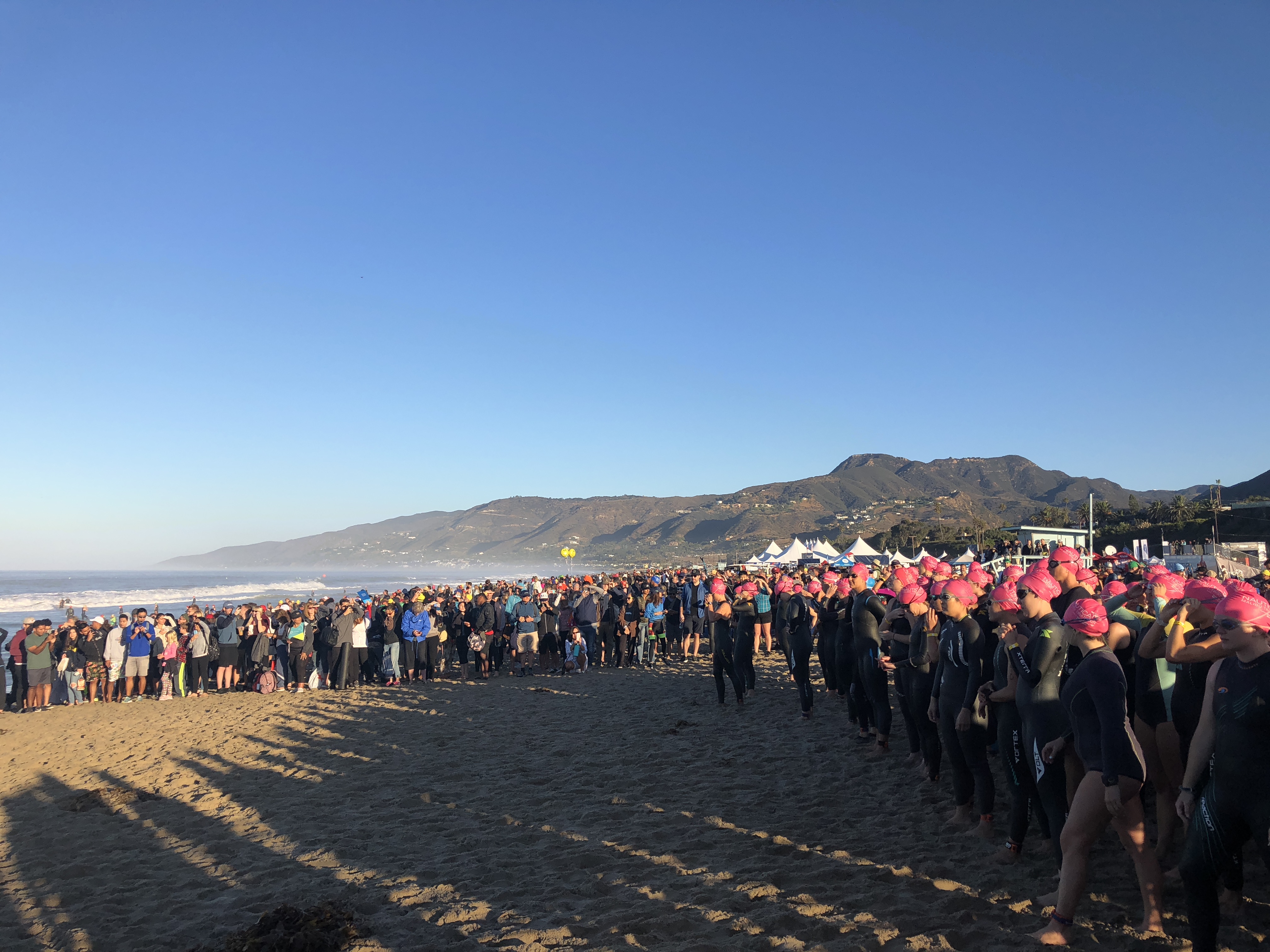 A Pepperdine student and alumna raced in The Nautica Malibu Triathlon on Sept. 15 and 16, marking another successful weekend of the annual triathlon. The race, held at Zuma Beach, welcomes thousands of athletes and spectators from around the country each year.

“Swimming in the ocean, biking on PCH and also running are three accessible sports here in Malibu, so I think a large number of people in Malibu work out that way,” Pepperdine alumna, Cecily Breeding, said.

The triathlon is two-days long. Saturday was the Olympic Distance, which includes a 1.5k swim, 40k bike, and 10k run. Meanwhile, Sunday was the Classic Distance, consisting of a half-mile Pacific Ocean swim, 17-mile bike ride and 4-mile run. Beginning at 7 a.m., the first heat runs into the cold, crashing waves to commence their three-part race along the Pacific coast.

Shaya Aguilar, a sophomore at Pepperdine, ran the Nautica Malibu Triathlon for her third time. Aguilar attended Oaks Christian School in Westlake, California, where she was introduced to triathlons by her college counselor. Now a Pepperdine student, she hopes to spark an interest in other students by starting, or rather revamping, a Pepperdine triathlon club.

Not only is Aguilar interested in the race, but she is passionate about the cause.

“The funds raised from the Malibu triathlon for the past 30 years helped to foster the development of a new ‘genetic signature’ that helps predict the outcome and therapy needed for children affected with neuroblastoma which is one of the deadliest and most aggressive forms of childhood cancers,” Aguilar said.

“I knew that I wanted to not only do a triathlon — just to do it for fun — but also that it was raising money for such a great cause, and it had been something that was so close to my heart for a long time,” Aguilar said. “It’s really cool to see that many people coming together.”

Breeding also did the triathlon on Sunday and advocates for fitness as a lifestyle. She said this was her first official triathlon.

“I went last year to cheer on a friend, and it was last year that I was standing in the sand, watching her come out of the water that [I said], ‘I am going to do this next year,'” Breeding said.

“It’s something that a lot of people in the Malibu community support and come out for,” She said.

Breeding graduated from Seaver College and now works as a freelance photographer and graphic designer in the LA area.

“The idea of lifelong fitness that has application to every area of life, not just chasing a ball around a field was new to me and kind of something that I first became introduced to through this yoga wear company [Lululemon],” she said.

On Saturday morning, athletes competed along Zuma Beach dressed in wetsuits to brave the cold waters. Dozens of people in bright orange shirts were stationed everywhere, directing traffic among both cars and athletes.

Michael Lee and Abigail Relatado, students at Cal State University of Northridge were among those volunteers. Lee and Relatado are apart of the Filipino-American student association and came out to volunteer in a group.

“We thought it was a really good way to give back to the community,” Lee said.

Lee also spoke to the downsides of having a major race in a busy area, “I see how it brings the community together, but also with all the traffic delays, it can get kind of tedious,” Lee said.

Malibu is the place to be for those seeking fitness and community service as core values. Seeing college students sacrifice their time and energy to such a cause is heartwarming and inspiring.