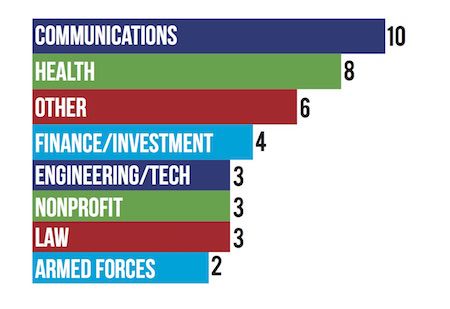 Pepperdine University nominated and carefully selected 40 alumni out of 30,000 alumni under 40 years old from around the world to be this year’s 40 under 40.. The University solicited nominations via social media, email newsletters and word of mouth that resulted in a total of 276 nominations, according to an email from Pepperdine’s Social Media Manager, Noelle Seybert. The nominations were then selected by a multi-school, multi disciplinary committee of seven.

The 40 under 40 were chosen for their purpose, service and leadership who are “innovating in their fields, inspiring their communities and leading by example as the next generation of Pepperdine Waves,” according to the Pepperdine 40 under 40 webpage.

Richard Herko, assistant professor of Strategy at the Graziadio School of Business, was one of the individuals chosen to determine the 40 alumni to be selected for Pepperdine’s 40 under 40.

“When you think about the amazing people that we have that come through this university, I think it’s time we start recognizing them, especially the folks that make a contribution to society that’s so great, so early in their careers,” Herko said.

Something that really stood out to Herko during the nominations was the number of entrepreneurs that have come out of Pepperdine.

“There were several people who have started amazing businesses,” Herko said. He said that traditionally, when he thinks of business leaders, he thinks them to be on average 65-year-old white men who take the reigns of Fortune 500 companies. He said he was impressed that so many of the nominees this year were young women who started amazing businesses that employ hundreds of people.

Helena Morse agreed that the 40 under 40 really opened her eyes to possibilities for her future.

“It’s inspiring to see the impact and change that Pepperdine graduates have made,” Helena Morse, a junior undergraduate at Seaver, said. “I think it’s great that Pepperdine highlighted these achievements because it motivates students to push themselves and stay dedicated to their education.”

Herko said he found the 40 under 40’s contributions to society at such young ages was one of the most impressive attributes of the chosen graduates.

“As someone who’s over 40 – sometimes, it takes a while to really make your impact,” Herko said. “We have some amazing people here at Pepperdine who are contributing to society in amazing ways at 25, 26, 27 and I think it’s great that we are recognizing those folks.”

Herko shared he is very proud of the individuals who were chosen to be the 40 under 40 and his favorite part of the process was getting to know the nominees. He said his job was not to do outside research on those chosen in order to validate the reasons behind them to being a part of the 40 under 40, but nonetheless it inspired him to research the nominees in order to get to know them better.

“I was absolutely blown away by the people who – at a time when a lot of people were just starting their career or trying to figure out what they’re doing – are already contributing in such significant ways, that not only Pepperdine has taken notice, not only the people associated with Pepperdine have taken notice, but we are talking about the national and international press saying these are people that are contributing to society in major ways,” Herko said.

He said it was a fun process that he hopes continues for years to come.

“I’m hoping there’s a 30 under 30, I’m hoping there’s a 25 under 25,” Herko said. “And if so, I hope that I’m part of the process because just getting a chance to meet these people via their resumes, via their biographies – has been an awesome process. Getting reacquainted with some of the folks I knew when they went through here and seeing what they’ve done subsequent to that is an awesome process.”

Herko’s time as a professor gives him an even greater appreciation for the paths students take after their time at Pepperdine.