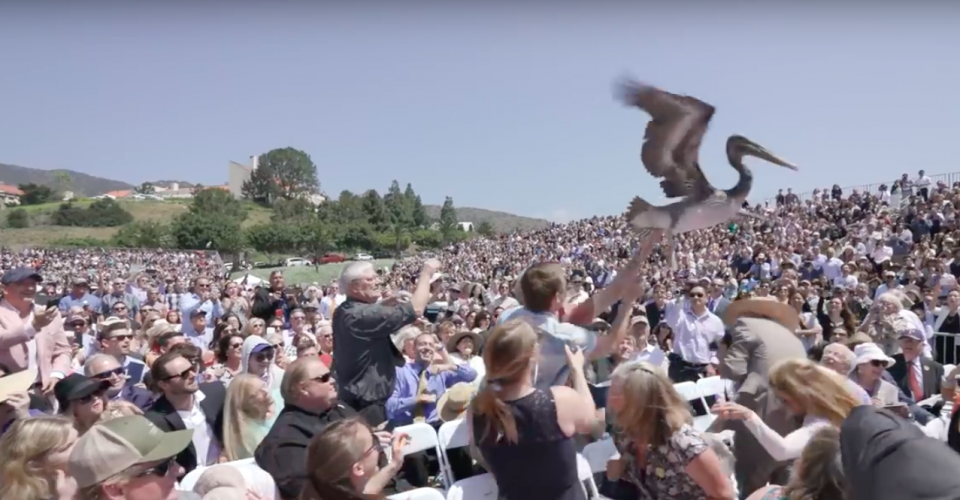 It’s been nearly a month since graduation. Students may have forgotten the speeches, the list of awards, the farmer’s tans and sunburns. However, few have probably forgotten the crowd-storming pelicans and the national renown left in the pelicans’ wake.

After all, who couldn’t recall two enormous, long-beaked creatures sweeping across the crowd just a few feet above the heads of unsuspecting friends and family?

The birds dove across the blue-clad graduates landing in empty chairs among the crowd, a woman’s umbrella and even a man’s lap. One pelican spent a few minutes in the VIP section of the audience, fluttering its wings in the faces of the surrounding guests.

As seen on video footage from Grant Dillion, Pepperdine’s staff videographer, one of the pelicans soon fled the seating area and flapped recklessly to the nearby red carpet of the processional walkway just to the side of the stage where it paraded for a few minutes.

Campus security managed to form a human barrier around the pelican on the red carpet, and one of the members caught a quick snap on the arm from the seabird. Soon security shooed the bird toward the ocean behind the stage.

At the other end of Alumni Park, video footage from Akela Newman, a Pepperdine alumna, shows one man carrying the second pelican in his arms and walking it away from the commotion of the crowd toward the nearby field.

While some were scared, most attendees were excited by the pelicans’ appearance, as shown by the waves of cheers and shouts each time the pelicans flew overhead. The occurrence left everyone with a story to tell, including Steven Matkins, a senior religion and Italian major who graduated at the ceremony.

“Personally, I think it added to the excitement of graduation,” Matkins said. “It just goes to show that even when everything is supposed to perfect, life interrupts and you gotta just roll with the punches.”

Davis Burnett, a finance major who will begin his senior year in the fall, agreed with Matkins, noting that the pelicans helped to break up the usual repetition.

“I’ve been to a lot of graduations,” Burnett said. “After a while they start to feel very similar. I was glad to have the excitement of the pelicans to disrupt that and make a more memorable ceremony.”

Burnett said the attention was good for the school.

“I remember listening to one reporter talk about how these pelicans came to the graduation due to our school being so close to the beach,” Burnett said. “I’m sure that is something that left a positive impression on viewers.”

Burnett said pelicans at next year’s ceremony would certainly bring his attendance.

“I hope so,” Burnett said. “I definitely will be in attendance if they come back. I’m sure our security will be better prepared, too.”

According to the National Audubon Society’s website, California’s brown pelicans tend to forage for food in the nearby coastal waters. The large plot of blue robes so close to the ocean may have been a source of confusion for the birds.

News of the pelicans’ showy display spread beyond just the Pepperdine community. The footage from the ceremony circulated news outlets across the the country and even internationally. Fox News, BBC News and The Washington Post all shared the story to their viewers.

“It’s been extensive and very positive,” Feltner said. “What a wonderful way to, at a time where we are honoring our graduates and our students … be able to showcase the ceremony, the lovely stage, the great day and to be able to invite the world in at a time when we’re honoring students.”

Feltner said though this event certainly affected the ceremony, he does not expect there will be any changes made to future ceremonies in order to prevent a recurrent situation.

“My personal perspective is this has never happened previously,” Feltner said. “We have done a lot of graduation ceremonies in Alumni Park. I think that a one-time event does not necessarily necessitate any planning … A one-time anomaly doesn’t seem like something we plan for.”

After the Investigation: A Look at Sexual Assault and Title IX 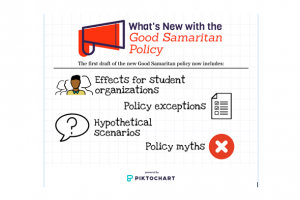 In the wake of a semester of controversy and conversation over the Good Samaritan policy, Pepperdine administration released...
Copyright 2013 Jupiter Premium Magazine Theme
Back to top