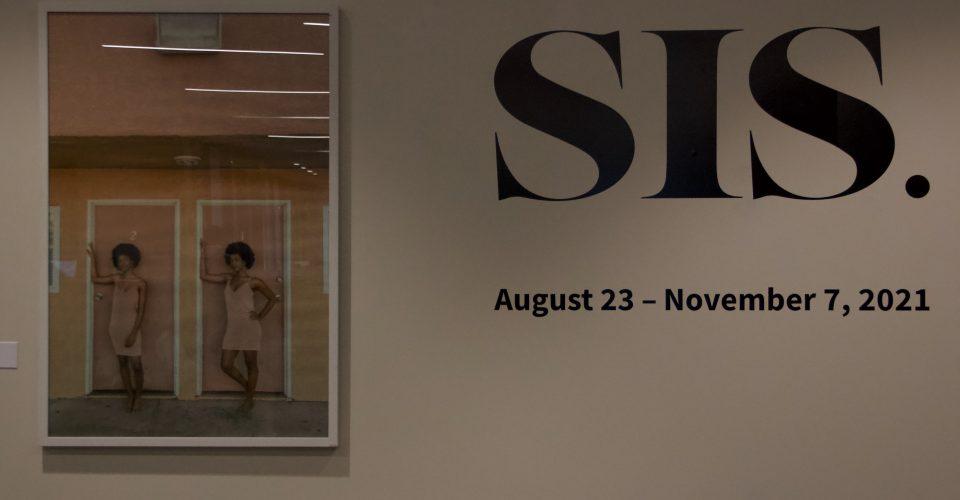 Rikki Wright’s photographs featured in the Payson Library’s latest exhibit, “SIS” hang on the walls of the library. The new exhibit investigates the hills and valleys of sisterhood, allowing guests to view kinship in a new light.

New semesters mean new stories for Payson Library. Through the years, the library has created vivid displays of art and history, each unveiling different perspectives on distinct themes and concepts.

This semester is no different, as the library presents “SIS,” a new look into the aspects of Black sisterhood presented by Los Angeles native, Rikki Wright.

Pictures of real-life sisters deck the walls of the Payson Exhibit Gallery as Wright takes viewers on an escapade that explores sisterly bonds. Throughout the exhibit, she captures compassion and competition, love and envy, and other dualities that make up the DNA of sisterhood.

Students stroll through the exhibit gallery, exploring an often overlooked side to sibling relationships. With each picture capturing a distinct aspect of sisterly relationships, Wright illustrates not only girl power, but also the powers of strong spiritual bonds.

Wright shows the ever-reaching grasps of sisterhood through pictures, a short film and blackboard demonstrations. She captures the challenges and benefits of sisterhood — displaying how the power of love transcends race, age and bloodline. 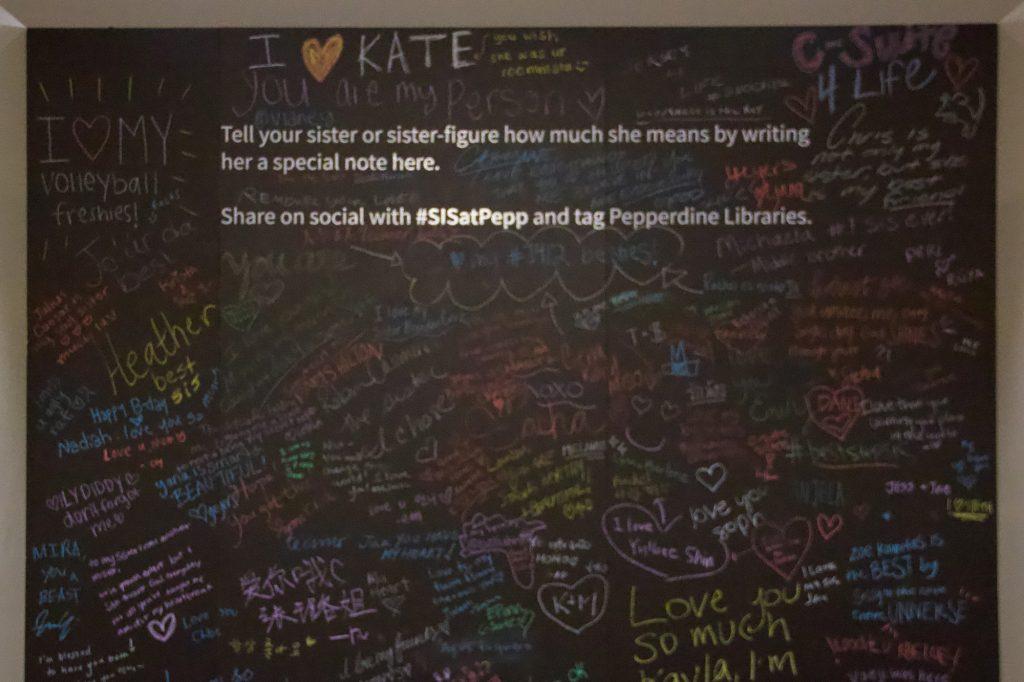 One of Wright's distinct displays encourages students to show their love for their sisters on this blackboard. This inspired students to post pictures of the wall with #SISatPepp. Photo by Chloe Chan

Using the urban landscape of Los Angeles as a backdrop, Wright captured the essence of Black sisterhood. Many of her pieces feature pairs of Black sisters, serving as a reflection of her own story.

Wright has two older sisters and often creates work regarding the concepts of sisterhood — it is one of the elements that helped her evolve as both an artist and a person, according to Wright’s website. Many of her works center among women of color, examining the various ways in which a community emphasizes ideas of strength, beauty and concepts of both femininity and masculinity.

After losing her mother at a young age, Wright began her lifelong search for examples of both femininity and motherhood, often capturing and imagining different possibilities through her photography.

Although many students used the exhibit as a place to study, some found inspiration within Wright’s work, examining each picture and relating them to personal struggles.

Sophomore Anita Watterson, one of the guests at the exhibit, said she was able to relate to it, as she recalls memories with her own sisters.

“I just think it’s amazing how she’s able to tell a story like this,” Watterson said. “It’s like they were having a conversation with me in my head.”

Watterson said the exhibit was relatable and enjoyable because she was able to see topics such as rivalries, self-comparison and friendship from a different viewpoint.

“I think when other people see the exhibit, they’ll start to understand all the different elements of sisterhood and get an idea of how having a sister impacts your world,” Watterson said. 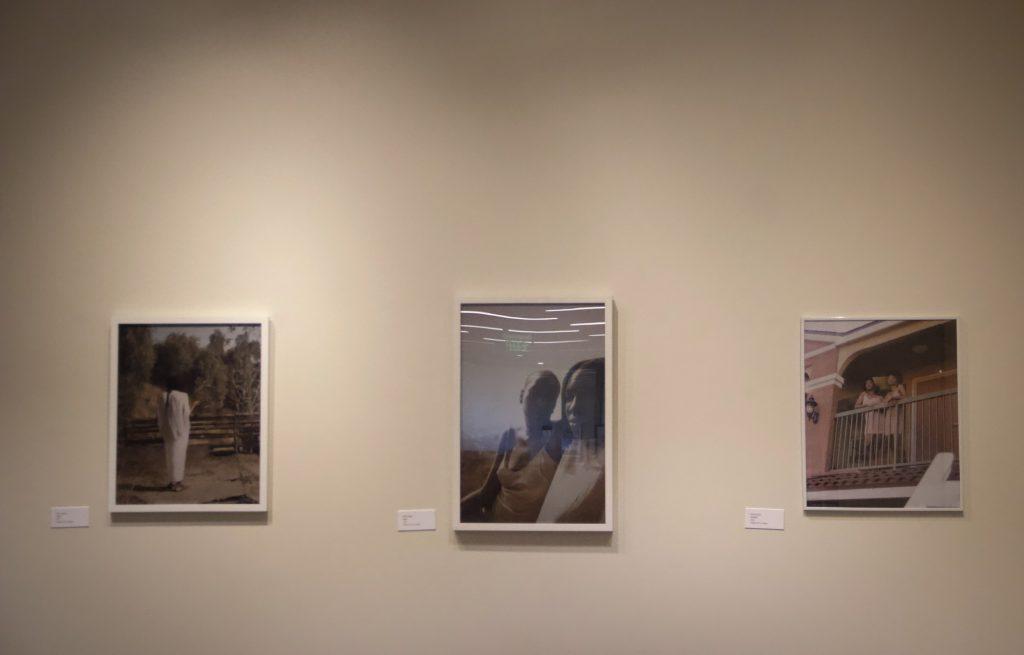 Photographs from Wright's exhibit display a unique side of sisterly relationships. She reflected on her past with her two sisters, but also investigated the elements of womanhood as well.

Sophomore Sophia Lang said it provided a new look into what it means to be and to have a sister.

“A part of me wanted to see it for myself,” Lang said. “I passed by it a few times when heading to my classes, but I wanted to spend a few minutes and enjoy it.”

Part of the exhibit that resonated with Lang the most was seeing girls of different backgrounds embracing each other, showing that sisterhood is a bond that goes beyond race, she said — and can often form through long-lasting friendships.

Junior Madeline Taylor said she loved how Wright emphasized that sisterhood isn’t defined by genetics or family history, but instead a strong spiritual bond between friends.

“It was amazing to see how Rikki [Wright] captured what it meant to be a sister while showing that it doesn’t have to do with being biologically related or sharing the same house, but instead sharing a connection that looks past people’s backgrounds and beliefs,” Taylor said.

Through her distinct perspective of sisterhood, Wright created a collection of photographs that not only confront kinship but reveal its challenges.

The exhibit will close Nov. 7, letting the Payson Library archive it and continue to tell vibrant and thought-provoking stories for years to come.

BalletX Brings Vulnerability to the World of Dance 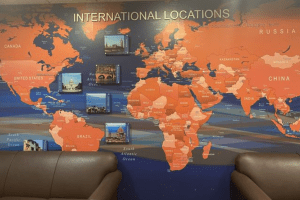 Outside Pepperdine's International Programs office is a map displaying the locations students can explore through study abroad...
Copyright 2013 Jupiter Premium Magazine Theme
Back to top